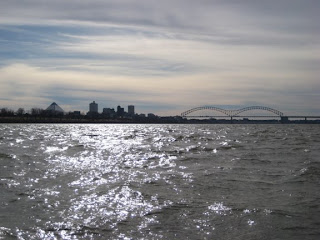 We had a number of barges wake us overnight as we once again chose a place to camp that was a waiting area for barges that couldn’t quite pass one another on the river as it was too narrow. The barge traveling upriver would sit and wait for the other to pass, its engine rumbling all the while. When the barges wanted to wake us using one of our other senses they would shine their massive flood lights at the tent. Not only had we camped in a waiting area, but we were also nearly immediately under a reflective river marker that the barges searched for with their lights.

It seemed that the wind wanted revenge for us cutting the day short the day before yesterday. The wind was repaying us with similar conditions, though it wasn’t quite as bad. We only had a short day to get us into Memphis and would possibly have a day off to check things out, so exerting some extra energy wouldn’t kill us. 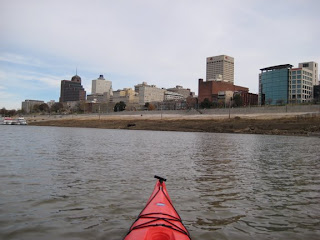 As we paddled along I wondered at what point I would see the Memphis skyline. The answer came as I rounded a bend ten miles shy of the city. While Memphis is a major transit hub, it is more so for rail and air cargo traffic, so we had little to contend with on the river.

After the missed connection with my family friends in Prairie du Chien, WI, I was nervous about where we were supposed to meet Jim, but we nailed it spot on and Jim was at the Mud Island marina waiting for us with a trailer. It was great to see Jim again. I initially met Jim on the Appalachian Trail in Pennsylvania. Jim was hiking a section of the trail and I happened to run into him on two separate days. We talked about my trips for 2008 and he mentioned that he lived in Memphis and should look him up when I got there. At the time, back in the height of summer the thought of being in Memphis in a kayak seemed a million miles away, but here we were. 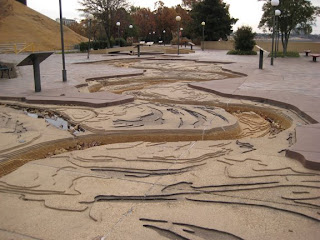 Before leaving Mud Island we stopped at the scale model of the Lower Mississippi River flood plain. The model covers nearly 950 miles from Cairo, IL to the Gulf. The model itself is five blocks long. The scale is 30 inches to one river mile, so you can imagine how big it really is. Seeing the model allowed me to really put things in perspective on the river. I looked at towns we passed and nodded knowingly while scouting others further down river wondering what they would bring. I tend to think that Kobie and I can have a better appreciation for the model that most of its visitors.

Jim gave us a driving tour of Memphis as we made our way to his place on the east side of the city. We took a look down Beale Street, which I wouldn’t say was identical to Bourbon Street in New Orleans, but it was a good general approximation and I wouldn’t know of any other street that I could make a better comparison with. 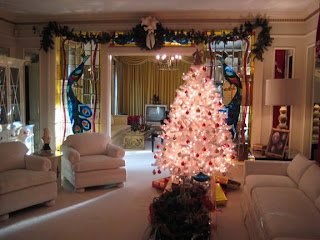 We had the pleasure of meeting Jim’s wife Karen and then got cleaned up before making the requisite visit to the former home of Elvis Presley, Graceland. On a rather miserable winter day we pretty much had the place for ourselves. While the grounds of the actual house are quite lovely (and decorated for Christmas this time of year), the house itself wasn’t necessarily the kind of place you might imaging a rock star living.

What was quite amazing about checking out Elvis’s digs was that it gave a sense of how many peoples lives this man affected with his music. Even while we were there we met two kids from the Faroe Islands paying homage. Who knew they listened to Elvis up there. 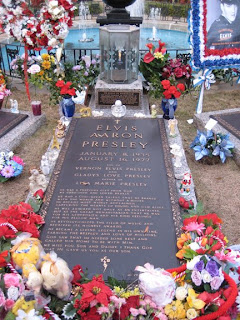 Elvis’s musical accomplishments are simply legendary. He has sold several billion records and makes more money dead than most people make when they are alive. It was overwhelming to see all of the gold and platinum records hanging on the walls. He apparently had a love for racquetball and had a court built on the property though given his weight I can’t imagine he took the time to play much. The entire racquetball court is now filled with awards. We also got to see collection of jumpsuits, cars and his two planes. Much like Kobie and I were able to appreciate the Mississippi River model on a higher level, Jim was able to do that with Elvis’s planes as his career was spent as a pilot.

One thing we didn't get to see was the toilet upon which Elvis was sitting when he expired.
Posted by Kevin Knieling at 11:23 AM