Nuances of the River 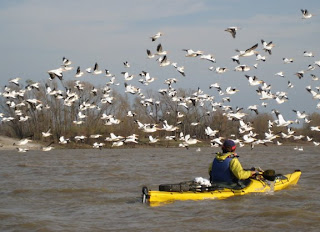 Despite having camped in a ravine, the theme continued of having a number of barges disturb us over night and deer that was persistent in coming through camp. If all those hunters we passed knew how easy it was to find deer, or rather, let them find us they would be shocked.

We were thrown to the wolves first thing in the morning with a heavy head wind. What might have taken us 20 minutes to paddle last night on a calm river took us an hour.

As we rounded a bend we found some cover allowing us to increase our speed from three miles per hour to seven. We noticed that the tree tops weren’t swaying even in the slightest, so we hoped that the wind had dropped. How wrong we were as when we rounded the bend we were socked with the equivalent of a 2x4 in the face. It seems that even if he wind spares the tree tops, it will, much to our chagrin, funnel down the river.

As I checked my map I noticed several large written warnings indicating that there were a few hydroelectric intakes as well as old river control flow channels in the area. And this was a warning to huge barges. It didn’t take more than paddling on the other side of the river to avoid the inflows but it left us at the mercy of the wind. At one point as we passed an intake there was a barge coming down river as well as one going up. The river was wide, but not to the point where all vessels could pass one another safely. The upriver barge paused and let us passed on the outside before he hit the throttle and motored north. 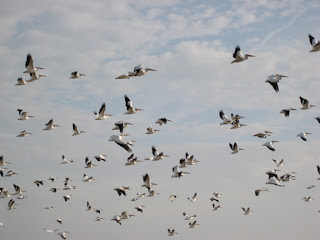 Having absolutely fought the wind the last few days my right shoulder was shot, feeling as if someone was repeatedly jabbing a dagger in it. I am sure I will be able to muddle through the last few hundred miles of the trip after coming this far, but paddling against the wind will not be fun. Sleeping on that shoulder is just out of the question.

We paddled through some chop on the river caused by the uneven, rocky river bed. Some of paddling was fun, much like white water rafting, but at other times I was just being shoved around and had water dumped on me. 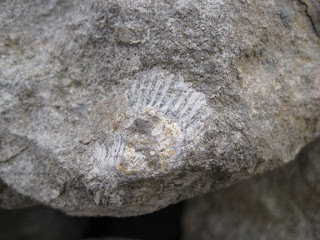 We stopped in a sheltered cove for some lunch which was brought to an abrupt halt by some rain. In the warmth I was able to smell the rain on the hot asphalt used in the revetment on a summer day. I also found some fossils in the rocks that were used in teh revetment. Just after lunch we left the state of Mississippi and would now being paddling for the remainder of the trip with Louisiana on both sides of the river.

The latter part of the day was like paddling in a wind tunnel. The highlight was that were able to cut across a large sandbar while rounding a bend as the water level was high enough to cover it in its entirety. Not much of a highlight really.

We wanted to have a campsite by 5 o’clock so we began looking at 4:30. By 5:15, after having come to an area of cliffs and a “No Trespassing” sign, we finally managed to find a campsite across a maintenance road for one of the river lights. It wasn’t ideal, but it would be home for the night. It didn’t help that we had spurts of rain as we set up camp.
Posted by Kevin Knieling at 8:04 PM