A Whole Half Day 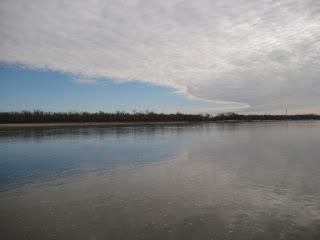 The morning began with Kobie going out to look for a tire and I having breakfast. As I was eating breakfast I was informed that someone had stopped in and left the message that he was looking for a trailer. It had to be Dave. Dave returned as I was finishing breakfast as did Kobie minutes later.

Kobie struck out on the tire front locally, so Dave offered a ride to Herculaneum, but Kobie was shut out there as well. Back at the hotel we began bringing our gear down from the room. We couldn’t get the kayaks out before 9 o’clock as that was when breakfast ended. We would have had to bring the kayaks right through the breakfast area where a dozen people were sitting.

While bringing down our gear some folks began asking questions as to what we were doing. Chatting with people a few minutes at a time added significantly to the amount of time it took to bring get our gear out of our room and into Dave’s truck. The hotel was a family run business and all were present for Thanksgiving so we had the opportunity to speak with most of the members of the family. They suggested that we must get tired of answering the same questions all the time, but we don’t. While the overriding goal is to make it to the Gulf, this trip is also about meeting the people along the way and learning about the areas that we are paddling through. We even received a retroactive invitation for Thanksgiving dinner yesterday from the folks running the hotel. It was minor stir getting packed up, kayaks loaded, photos taken and finally making our way back down to the river.

While driving back to river we kept our eyes open for Kobie’s tire lying on the side of the road, but it wasn’t to be found. Kobie ordered a new set to be delivered 200 miles down river. We had enough in the way of food and water for a week, so didn’t think we would need our kayak carts until then anyway.

It took quite some time to get loaded up, but eventually we did and finally set off by noon. Dave, being even more helpful than he had been getting us back to the Plattin Rock boat ramp, he gave us in our kayaks a shove off the bank and into the river. Thanks Dave.

As we began paddling I mentioned to Kobie that it feels very sluggish. He looked at me ad said, “we are going 6.5 miles per hour”. Suddenly it no longer felt quite so sluggish. Perhaps it was gorging myself on turkey that made me feel as if I was paddling through oil. 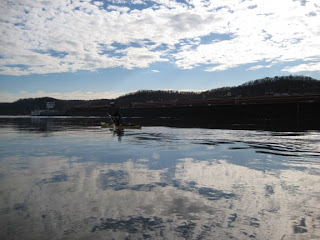 The banks of the river became quite sandy in places. It made me think back to all the mud back up on the Red River. Paddling on the Red seems ions ago, yet feels as if it was yesterday.

I stripped down to short sleeves just after beginning to paddle. Also shortly into our day we passed a barge. As if being our coxswain the tug captain called out over his PA system, ”stroke, stroke, stroke” and then broke into a few verses of “Stroke me”, by Billy Squier. He seemed to be having a good time and why not? Things could probably get a bit boring plying the river all day coming up from New Orleans. It was fun for us as well.

The day was short given that we only began paddling at noon, but somehow we still managed to eke out some 29 miles. It was due solely to the fact that our average speed for the day was 6.1 miles per hour, significantly higher than any other day with the exception of the day arriving in Crystal City.

We camped on a sandy beach as if we were at the ocean. When barges passed we even had the sound of waves on the shore. While Kobie’s tent is a great lightweight hiking tent, it doesn’t fare well in sand, so we decided to bunk in my tent for the night. We were on our kick of being more efficient so having to only pack one tent would help with that. It was also nice not to have to carry our kayaks more than ten feet out of the water as they are fully laden. It wasn’t quite as bad as when we left Winnipeg where I was carrying 50 pounds of water alone, but I don’t necessarily want to move my kayak more than I have to. My hands hurt enough as it is. Every day my fingers start out more stiff than they began the one previous. I also have some tingling in my fingertips.

As we were on a sandy beach I was all for a bonfire. It was a warm night, so other than cooking our sausages and sauerkraut on the fire, it wasn’t really necessary. I love good fire though. We got the fire going and as we were sitting in the light of the fire Kobie spotted what he thought was a small boat just in front of us on the river. As it turned out it wasn’t a small boat, but rather the front light of a 1,200 foot barge. We had to swivel our heads to see the rear end. Barges are far more impressive at night.

We found ourselves a great campsite on the river though the drawback was the barge traffic. The tugs pushing against the current strained their engines getting their cargo north. Those heading downriver were far quieter. Another annoyance from the barges are the spot lights they use to navigate. Those lights have to be 15 million candlepower. They scan the banks of the river looking for reflective markers that are posted indicating where on the river the barge is. It seems though as if they checking to see if someone is going to rob the stage coach.

My only real concern about our chosen location to camp was the sound of a pack of dogs. They didn’t sound like coyotes, but wild dogs.
Posted by Kevin Knieling at 8:31 PM