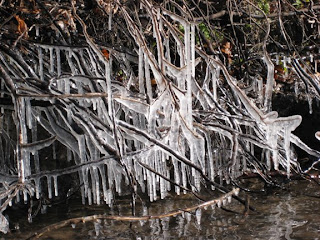 I remember a time about a month back when the temperature was in the 30’s and I commented how I was hoping that I wouldn’t see the 20’s. That mark was eclipsed last night as the temperature of 14 degrees was closer to single digits than the 20’s. Not only was there ice on the inside of my tent but there was a crust of ice on the upper part of my new sleeping bag as well. While missing out on a warm day paddling, at this point I was glad I waited in Quincy, IL for my new sleeping bag. People have asked in the past how I stay warm at night and my new answer is: spend nearly $400 on a sleeping bag. I was warm the night through. What’s the price for warmth, really?

I hadn’t really thought about it since, but when I heard dozens of rifle shots before even exiting my tent, I remembered someone telling me that it was the opening day of deer hunting season for rifles. While I wasn’t concerned being on the water, we would have to be cognizant of any hunters along the river when choosing a campsite for the night. 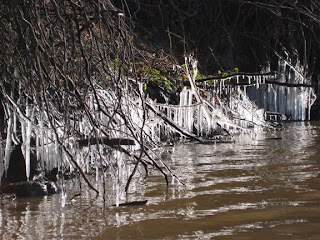 The sky was clear and the rays of the sun motivated me to get packed and on the river. With my mother working in the dental industry I always try to practice good dental hygiene, however this morning I had to pass on brushing my teeth as all of my water had frozen. There was no wind to speak of and the river looked as it was running well, so other than being cold we didn’t have much else to contend with.

As we paddled along we were surprised by a massive explosion. It wasn’t any type of firearm as not only was the sound louder, but we both felt the shockwave from the blast. We looked around but didn’t notice any black plumes of smoke or anything else out of the ordinary, so we assumed that there was a quarry in the vicinity that had done some blasting. If I wasn’t awake up until that point, I was now.

While the day didn’t seem to get out of the 20’s it was quite pleasant when paddling. As expected on a cold but pleasant day, when we approached Lock and Dam # 22, we were signaled straight in and sent on our way. 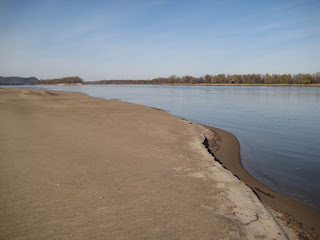 We stopped for lunch on a large sandbar, formed from sand dredged by the US Army Corp of Engineers. As we exited our kayaks we noticed a downed log that had a complete coat of ice on it. Not only was the tree covered but there were numerous puddles that were frozen solid. When out of my kayak and exposed to the outside air, there was no question, I was cold. . It was worse still when even the slightest wisp of wind puffed. Kobie and I hastily constructed a couple of sandwiches while we pulled out our sleeping bags to hopefully dry from the condensation that collected and froze overnight. Lunch was an abbreviated affair, leaving me with cold toes, despite wearing three pairs of socks.

In the afternoon when we began looking at our options to camp we found that we had to either stop immediately or paddle seven miles further to find another island. As we weren’t going to make seven miles in the remaining hour of daylight we called our day to an end. We were right next to an island that was fine with us, but as I got to shore I saw a series of footprints, presumably from hunter. Kobie and I scouted a section of the island and found nary a soul so we decided it would be our home for the night. 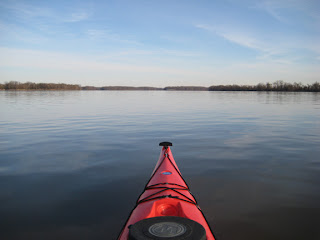 It seems that with so little daylight to work with that we are paddling half days. I think I spend more time gathering fire wood and setting up and taking down my tent than I do paddling. I expected to be a little further along than this by now, but in any event I wished that we could find a few extra hours in the day to paddle. I had considering paddling in the dark, but our kayaks our not equipped with the proper lights for us to be on the water before dawn or after dusk safely, or legally for that matter. Perhaps further south we will once again have the motivation to get up in dark and get on the water when it is just barely light enough to see.

The evening almost seemed warmer than the one previous. Regardless, we set up one of our best fires yet, where we were able to lean against a downed tree and have dinner. I even heated up a can of soup rather than eat it cold. After relaxing by the fire we retreated to our respective tents and snuggled in for another cold night.
Posted by Kevin Knieling at 10:13 AM