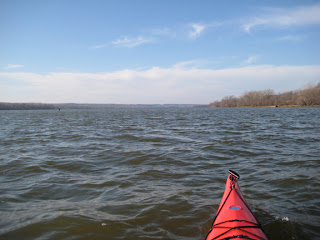 I am not sure if the train tracks were under repair or what, but I only heard two trains the entire night. As something had to pick up the slack for the trains not waking me, I was jolted awake by what I could only guess was a dog just near my tent. It may have been a coyote, but either way I wasn’t going to get out of my marginally warm sleeping bag to find out.

The down feathers that insulate my sleeping bag were a bit moist from the last weeks rain, so they didn’t quite insulate as well as they should. This was the bag that Tom delivered when we were with Jamie and Jane in Frontenac, MN, but I am really not happy with it. When Kobie was buying a new bag I pointed him in the direction of one particular company, advice that I probably should have heeded myself. It is bad enough being cold during the day, being cold while trying to sleep is worse.

We woke to a hole in the clouds showing the blue sky beyond. The blue in the sky was short lived though as it remained just long enough for us to get packed and down to the boat ramp. On a positive note it was warm enough to paddle without gloves. The NOAA weather report broadcast over my marine radio for the area was of partially cloudy skies in the morning, giving way to an evening rain. It wasn’t the worst forecast I have ever heard and regardless, I had no choice in the matter. 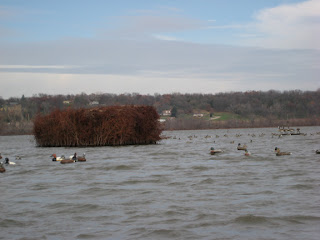 We paddled past numerous duck blinds throughout the morning, all unmanned. Some of the hunters leave their decoys out though so it is never for us to know which blinds are manned or unmanned until we are within firing range. Other than one blind yesterday, we hadn’t seen any hunters recently. Kobie got a kick out of all the decoys that are set near the blinds. Today alone we paddled past several thousand dollars worth of decoys. Kobie said that “it is a lot of effort just to shoot a duck” and in any case is “not very sporting”.

As we entered Lock and Dam # 16, the guy working the lock told us that all the decoys that break free end up floating down the river and into the dam. I have also finally figured out the pattern for travelling through the locks, which is something like this: On nice days, or any day that is even marginally pleasant the locks are free for us to cruise right through, however, on days when there is precipitation or the elements in general are making us dream of someplace warm there will be a minimum wait of 45 minutes.

Also using the handy marine radio, just before approaching a lock, I radio the lock to see what the status of the lock is. The conversation with the lock is generally something like this:

Then we hope to hear something like
Lock: “Lock is free, making it ready”. At which point we would paddle up, they would open the doors and give us the green light to paddle in before being lowered to the level of the river on the south side of the dam. The drop varies, but on average is about 10 feet. If I see a barge in or near the lock before radioing, I cringe in those few seconds of silence before hearing the reply of how long it will take before the barge will have made it through. Fortunately after the city of St. Louis, MO the river is unfettered and we will no longer have to worry about having to use any locks.

As NOAA predicted the blue skies had returned, but only until we were ready to have lunch. At that point the sky clouded over once again and left us sitting on the damp shore looking at the city of Muscatine, IA. The city of Muscatine is a turning point as from there, the river again heads south. For the last 40 miles we had been traveling for the most part in a westerly direction. We are hoping that over the next couple of weeks our push south will bring us warmer temperatures. 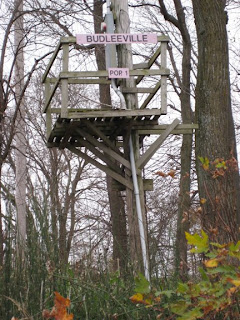 As we stopped for lunch I saw a sign for the alleged town of Budleeville, which if it were a real town would come in under the population of Wagontire, Oregon's population of two. I have not however been able to confirm the actual town status of Budleeville. In any event I found the sign amuzing enough.

Along with the afternoon clouds there were 20 mile per hour winds out of the south, so we had that to look forward to as we rounded Muscatine. We did our best to use the islands in the river for cover, but the wind still found us. While we had to push against the wind, the stretches of water we tried to stay in weren’t big enough for the wind to produce waves of any real size. I took the odd wave over the front of the kayak, but I was hoping the days of Lake Pepin were over.

The temperature was a high of 59 degrees today and as I was enjoying the warmth as a spotty rain started falling. I thought we might escape the day without precipitation, but it wasn’t going to be. My kayak seat has been soaked for the better part of a week with no prospect of me having the chance to dry it out as there was more rain, or snow in the forecast for the next two days. I am forced to focus quite a bit in my writing on the weather and it is only as it is such an integral part of our day. Temperature, precipitation and wind play a huge role in how we prepare for the day, what we do during the day and where we camp at night. People might take the weather for granted, or say “nuts, I need to bring an umbrella”, but when spending 95% of your time outdoors weather is more than a passing thought.

We had several options for camp, so we chose the best of the lot on Kilpeck Island. It seems that the area is also used by beer swilling locals, as they left some evidence behind. We just hoped that they wouldn’t be out on a rainy Thursday night. The heavier rain started falling as soon as we got our tents set up, so it was a can of cold soup for dinner while sitting in my tent. As I lived in France for quite some time a fine meal certainly isn’t lost on me, but everything has its time and place. I was happy with my cold soup and some dehydrated pickles that Ron had sent us off with yesterday.
Posted by Kevin Knieling at 11:49 PM