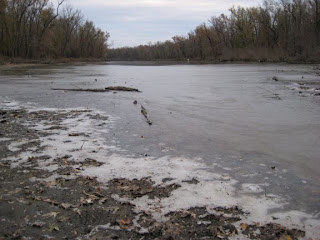 Surprisingly it was a little warmer than the night previous. I almost took off a layer of clothes when I woke up in the middle of the night…almost. It was also another morning of rifle blasts. I really hope these people are shooting at multiple deer, because I always seem to hear more than one shot at a time. They can’t all be that bad a shot.

Just as we were getting our kayaks in the water in the morning we noticed a barge coming past. It was also a 1,000 foot barge, meaning that it would have to be sent through the lock in two sections, taking up to an hour for it to pass through in its entirety. As we don’t paddle much slower than the barges it would also meant that we would have to wait of it at the lock.

While the mercury proved that it was in fact a higher temperature today, yesterday with the sun shining on us felt much, much warmer. As it was completely overcast it felt every bit as cold as the upper 30’s that were slated for the day. I know it was colder than that and in the freezing territory in the morning as my skeg froze in place preventing me from deploying it. On calm water with little current it isn’t much of an issue as I can control the boat rather easily. It is on those days where the wind decides to blow where it is most useful in keeping me going in the direction I would like.

It was a disheartening start to the day as when I pulled off the land and was immediately blown upriver. Even the current wasn’t strong enough to counteract the wind.

It seems that were on par hitting one lock a day and as the US Army Corp of Engineers neglected to include a Lock # 23 we were skipping from Lock # 22 yesterday to Lock 24 today. It seemed that the wind held us up just enough to give the barge we saw in the morning time to pass though the lock. The back section was still in the lock, but we only had a 10 minute wait. As we waited we hid behind a concrete section of the dam to get out of the wind. The day was almost tolerable out of the wind. It wasn’t like the wind we had on Lake Pepin, but it was just enough to make the temperature drop to an uncomfortable level, not to mention have the cold air in our faces the whole day. On the up side though, the south wind was supposed to bring some warmer temperatures for tomorrow.

Just after the lock was the town of Clarksville, MO. I didn’t quite follow the advice of the musical group the Monkeys and take the last train there, but Kobie and I thought it would be an ideal place to get off the river and inside someplace to warm up and have lunch. We aren’t picky, we would have settled for some gas station pizza or a sandwich, but the town had nothing on offer at least in view from the river. There was a lovely gate with the town name emblazoned on a sign atop it, but not so much as a gas station. Its not like we were looking for a Michelin Rated three star restaurant, we were looking for pretty much, well, anything. 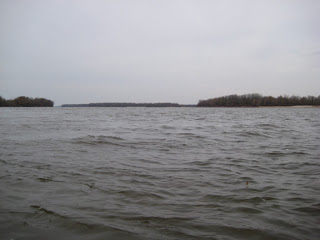 By early afternoon we were getting hungry and I had absolutely no interest whatsoever in getting out of my kayak. It is usually my fingers or toes that are cold and in this case they were, but my core was cold as well. The day was becoming less fun. Lunch consisted of a cold can of soup, consumed while sitting in our kayaks.

It was just a tough day on the water. This wasn’t what the brochure for the trip said it would be all about. Seriously though, I knew full well there were be many tough days on this trip and today was certainly one of them. As Kobie had a fixed flight in early January we don’t have the to option to make it an early day if we are going to get down to the Gulf before Kobie has to fly out.

I was ready to be done by two in the afternoon, but we pushed on for a couple more hours. With hunting season in full swing we needed to be cognizant of where we camped as it was possible that there would be hunters on the island. We had seen more than a dozen hunters during the day and while the hunting day ends at dusk, they would be back before down in the morning. We settled on an island that was mostly sand. There was plenty of tree cover but it took Kobie nearly an hour to get his tent set up in the soft sand, having to dig deadmen into the ground.

We ended our night as we seem to most nights now, sitting around a campfire talking about how the trip will progress from here. Our next obstacle was St. Louis as there will be little in the way of places to camp should we have to end our day near the city proper.
Posted by Kevin Knieling at 10:39 AM