I was up at first light as seems to happen when we stay in town inasmuch as when I first open my eyes I begin thinking of what I have to get done for the day. It isn’t necessarily a bad thing as I can get a jump on what needs to be done. My main focus for the day was obviously to resupply but to also get a few updates online.

Kobie started his day by going back to the boat ramp where he hoped he would find the missing wheel sitting on the side of the river. While he didn’t find the wheel he did run into Dave, the fellow from yesterday. Dave mentioned that there was a farm supply warehouse a few miles north in the town of Herculaneum. How is that for the name of a town? Better still he might also be able to provide a ride.

Crystal City, MO where we got off the river was actually founded solely to produce glass. I was happy to hear that the original name of New Detroit didn’t stick. The town was strictly a company town being owned by Pittsburg Plate Glass Company before it began selling plots to private citizens. When a new factory was built in 1908 it was the largest plate glass producing plant in the world. Unfortunately glass production in Crystal City has gone the way of the buggy whip.

Today Crystal City is local in an area known as the Lead Belt, comprising southeastern Missouri. The area is rumored to have the highest concentration of lead anywhere on the planet as well as being the worlds leading lead producer. 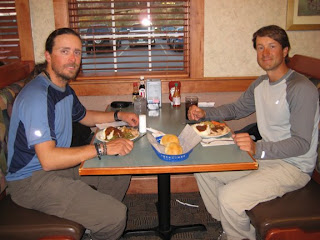 I was hoping to show Kobie what a true Thanksgiving dinner was all about, but we had to settle for the buffet at a place called Ryan’s. We had an intimate little meal with 100 strangers. While it didn’t involve family, football or ugly sweaters, I packed in as much food as humanly possible and had to waddle out of the restaurant.

While sitting in the restaurant I was wondering what everyone’s story was and why they were in the restaurant for Thanksgiving. Perhaps some people don’t like to cook, some I’d guess don’t have any family and us, well, we were out of town.

As we sat eating I said to Kobie, “I can’t wait to get on the water tomorrow”, but then made a slight change to “I can’t wait to be on the water tomorrow” as our prospects of finding a wheel for Kobie looked poor. Dave mentioned that he might be able to get us to the river, but absent that we decided we would have to either start offering money to random people that had a vehicle capable of transporting two kayaks, or both of us walk the four miles to the river with one kayak and then have one of us walk back with a wheel to get the other kayak. It would involve one of us having to walk 12 miles and really wouldn’t lend itself to a long day paddling.

To try and complete the picture of Thanksgiving, we ended our night sitting in front of the TV, though not having any leftovers.
Posted by Kevin Knieling at 8:20 PM