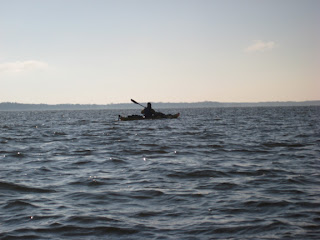 The overnight temperature dropped further that I thought it would. I was toasty warm the first half of the night, but got chilly the second. I was less convinced that my sleeping bag was fulfilling its duty described by the manufacturer as to what temperature that it would keep the user, namely me, warm.

I was woken in the morning by the incessant quacking of ducks. Kobies alarm went off shortly thereafter, but as I was colder than usual I asked Kob for an extra half hour to give the sun a chance to come up, which it did in all its glory. It was a beautifully sunny morning and though it was cold, it didn’t feel near the 25 degrees it was. While the sun did make a difference in ambient temperature, the psychological difference was far greater. 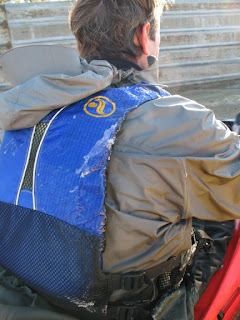 To get in my kayak in the morning I broke through the sheet of ice on top of the water in my bare feet. I am rethinking my love of paddling in bare feet. Paddling across the lake it was a rare calm. Anything that was in the shade collected ice from my paddle spray, myself included. There was one icicle that hung on my bilge pump for nearly four hours. Yes that is ice all over my back and no comments on the hair please.

I was able to see clear across the lake, which was over seven miles to the other end. I could actually see the earth curve away as I could only see the top portions of trees on the far side of the river.

Once we cleared the lake we were back on a narrower river. We also had a scheduled stop at a marina in Clinton, IA to pick up our maps that Robert and Ruth mailed ahead. I was able to pick up the maps without incident, though the maps weren’t 8 ½ x 11, the size of a standard sheet of paper in the US, but rather 11 x 17, twice the size. I wasn’t really prepared for that so I had to pull the maps out of the set and fold them in half to get them in my waterproof map case. While I stopped to grab the maps, I noticed that there were several fast food places right near the marina. As Kobie was on a frugality kick, due in large part to an exchange rate movement against one of his international accounts, we opted to not have greasy fast food burgers.

Lucky Lock and Dam # 13 was a non event as we paddled right through. On the south side of dam there were no fewer than 15 boats with people fishing. The further from the lock we paddled the more noticeably industrial the river had become.

We passed through one area of the river that was a full on area of industrial processing. There were pipes belching out all sorts of acrid smoke. One of the plants had to be a food processing plant as it smelled much like a brewery; some type of grain.

We did stop and have a great lunch. It seemed to warm up a bit and gave us the chance to enjoy our lunch on the side of the river. In our free time at lunch we made some shavings of dry wood as we were supposed to get freezing rain tomorrow. A little forethought now will mak 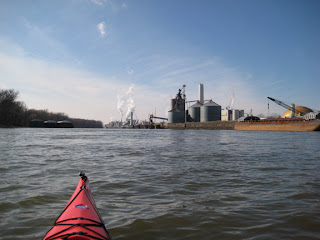 e our lives significantly easier later when it comes to starting a fire. Dry wood will be a rare commodity.

By the time we stopped for a late lunch we realized that we had only covered 16 miles of the river. We had hoped to be much farther on, but in the afternoon we focused on getting some miles in, which we did.

We arrived at our island camp and it was the first night in several that I didn’t feel the immediate need for a fire. It wasn’t warm by any stretch of the imagination, but it wasn’t as cold as it had been the previous few nights. We did however get a fire going nonetheless.
Posted by Kevin Knieling at 10:09 PM