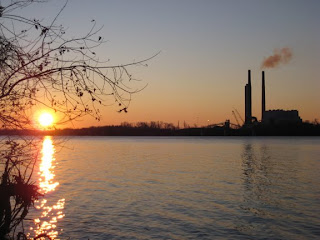 The temperature was barley above freezing, but given some of colder mornings we had been experiencing, it felt warm. And that was despite getting up in the dark. I was just excited to get on the river as a lot was going to happen.

It was a fantastic morning paddling as we were able to cover the ten miles to Lock and Dam # 26, better known as Mel Price Lock, named after a long serving Congressman, in no time. There was no waiting but better than that was the information we had received from the fellow working the lock. Up ahead there was an area of the river known as the Chain of Rocks. There was an eight mile canal that circumvented the area which all motorized river traffic must use, but we thought perhaps that it might be a little sterile for our taste. The lock worker informed us though that we would be dealing with whitewater and rapids should we take the Chain of Rocks. Discretion being the better part of valor, we opted to paddle the boring canal.

I guess we should have realized that with a name like Chain of Rocks, there might be a few rocks. Then again, among other misnomers I have been to a town called Lakeview, OR which had no lake view to speak of.

As soon as we got through the lock it was a changed, far more commercial river. There were tugs pushing barges or running about to go collect them. 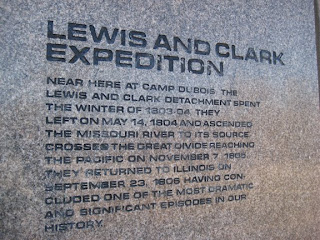 It was only another six miles to the beginning of the canal, so we were able to muddle through the traffic. Also just prior to entering the canal the Missouri river met with the Mississippi. Like all the other rivers feeding into whichever river we were paddling, it was underwhelming. We hoped there would be a big kick in the river, but it never materialized. Our one last hope was that after we passed through the next lock, which was the last on the Mississippi, the current would pick up. If nothing else the river color changed though as the river water now looked like a cup of coffee, with milk and two sugars.

We weren’t sure what to expect going through the canal, so we stopped for some lunch prior to entering. There was an area on my map just prior to the canal labeled Lewis and Clark State Park. Getting out of the water near the park was a chore in itself as it was nearly all mud. The park was little more than a large boulder with a plaque fastened to it describing the expedition of Lewis and Clark as well as two garbage cans. The park was hardly worthy of the name. 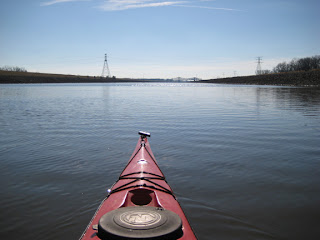 We entered the channel and it barely seemed wide enough for two barges to pass one another without making sparks, much less if there were two kayakers in the canal as well. The water flow in the canal was nonexistent as it was a canal. There was the final lock of the Mississippi River eight miles ahead at the end. The math was easy as to the run of the river. However many feet we were lowered by the lock divided by the eight miles would be the rise of the river in that section.

There was zero traffic in the canal as we covered eight miles in just under two hours. In arriving at Lock and Dam # 27 I radioed to see what the story was. It seemed that northbound barges were lined up five deep but I couldn’t see any barges that wanted to go south. It was also the only Lock and Dam that actually had two working locks instead of just the one. As we didn’t pass through a lock yesterday we were making up for it today by clearing Locks 26 and 27. The lock said they would hold one of the downward locks for us as they we busy bringing boats up. One of the captains south of the lock was audibly annoyed that the lock was going to wait the 5 or 10 minutes for us, but he had to bring the lock down anyway, so might as well do it with two kayakers in it. 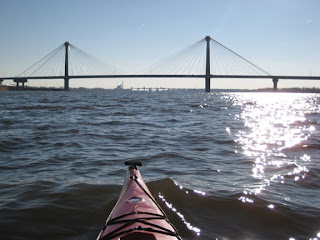 We had to wait for the lock to take us down as the other lock was coming up, but eventually we passed through the last Lock and Dam on the Mississippi River. The river looped around to the right and rejoined the river that flowed through the Chain of Rocks. As I looked where the two sections of the river joined I noticed a highly discernable difference in the flow of water, as in significantly faster. I pointed the area of water out to Kobie and as we hit the water Kobie called out our speed: 4.1, 4.7, 5.4, 5.9, 6.7 and finally topping off at 7.4 miles per hour. I knew we couldn’t keep that pace, but it was sure nice to have it as we were pulling into St. Louis.

Traffic on the river was intense. I had to have my head on a swivel scanning the water for boat traffic. I also wasn’t used to moving forward at such a pace, having to gauge how far I needed to move to the side versus how far the river pushed me forward. I laughed as I passed a bridge piling at what looked like an impossible speed. 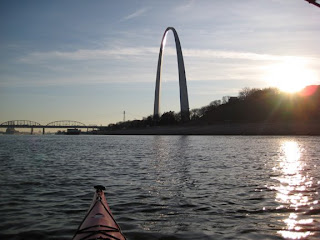 The river curved around to the right with tall buildings shooting up from the bank. As we rounded the bend we saw the stainless steel icon of St. Louis, The Gateway Arch. It was a milestone for this trip and a big one for me mentally as it reinforced that we were moving south.

We met Tony at the Arch and even having never met him before I doubt he had any trouble picking us out. As he was also to be picking up Mindi from the airport we had to hustle. Tony dropped us off at his place so we could get cleaned up while he went to grab Mindi at the airport.

As we drove into the city the price for a gallon of gas dropped to a low of $1.43. $1.43! There was a Wall Street analyst that early this year called for the price of a barrel of oil under $50. He was generally derided at the time, but now is probably laughing all the way to the bank.

Tony and Mindi returned from the airport and we went for dinner at a restaurant called Iron Barley.
I recommend the Peanut Butter Blaster for dessert. We ended the night back at Tony’s place and talked travel before turning in.
Posted by Kevin Knieling at 12:13 PM