The Royal Send Off 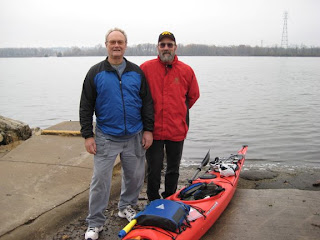 (l. Ron, r. Bill) In the morning Bill & Ann went to work while Kobie and I slept in. The weather outlook was generally positive or at least much improved over the prior day, so we set about getting our gear together and doing a few odd fixes, such as on my kayak cart as we had the opportunity and a wide range of tools at hand.

When Bill returned from the early shift he took the time to show us a solo canoe that he had built himself. The canoe was sheer beauty, but not to the point where it was fragile. He even built in a retractable sail in the top deck. It was an impressive piece of craftsmanship.

Bill was kind enough to run us around town so we could stop at the supermarket and grab a quick bit of fast food before getting back on the river. As I was washing my hands in the restroom I thought about how much I would like on of those hot air hand dryers about six hours from now. 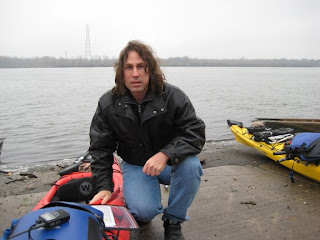 We got down to the boat ramp and Ron met us there, giving us some dehydrated snacks to take with us. Also meeting us at the boat ramp was a guy by the name Dana Starkell. Dana had been in touch with me before getting to the area as in 1980, Dana and his father canoed from Winnipeg to the Gulf of Mexico…and continued on to the Amazon. The trip is captured in their book “Paddling to the Amazon”. The two have done numerous trips and are planning another long one for 2010. At present Dana is Classical Guitarist. His web-site can be found here. I am sure that any information about his and his fathers next trip will be posted in due course.

It was awesome to be in the company of three avid paddlers. With few exceptions, most mornings begin with Kobie and I climbing into our kayaks and paddling off by ourselves, no fanfare or anything else for that matter. If anything was media worthy on our humble trip, this would probably have been it. Kobie and I got the royal send off and were literally shoved off back on the river. It was a heartening way to begin the day, despite our day beginning just shy of noon.

The day wasn’t all that cold, in the upper 40’s, and while the skies were completely overcast, the day was largely absent of precipitation. Things had improved from the day prior to the point where I was paddling without gloves and didn’t bother with my rain hood for warmth or otherwise. 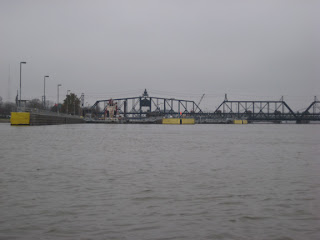 We seem to be making it a habit of getting off the river at night just before approaching a lock, leaving us with a short distance to cover to reach it in the morning. What unfortunately is also seemingly a regular occurrence is having to wait to go through the lock. I asked the lock personnel about portaging around and was told it really wasn’t an option. I saw his point as on one side was Arsenal Island, a US military installation where we weren’t permitted and on the other was a six foot concrete wall that we would have to scale from sitting in our kayaks. So we waited. Today we only had to wait about 40 minutes and it didn’t even seem that long as we weren’t in the midst of a windy rain. There was an interesting wrinkle with Lock and Dam #15 as there was a swing bridge over the south end of the lock that had to be maneuvered for any large ships to pass. We however were able to slide right under.

I hadn’t thought about it, but the Quad Cities area is steeped in history. Much to the chagrin of St Louis who hoped to be the gateway to the west, the Quad Cities area had the first rail bridge that crossed the Mississippi River. Not only was St. Louis annoyed by this, but barge captains were as well, giving them another obstacle to dodge. Two weeks after the bridge opened in 1856 the steamship Effie Afton crashed into one of the bridge spans resulting in both the boat and the bridge to catch fire. This brought about legal action by the barge companies against the bridge builders who had as their attorney one Abraham Lincoln. The case resulted in a hung jury allowing the railroad to continue using the bridge. Go Abe. For more information you can click here.

Before the bridge was even complete, the rail tracks on the Iowa side of the river were complete in anticipation of what was to come. In the winter a train was brought from the tracks in the east across the ice being pulled by horses and then put back on the tracks in Iowa, some two years before the bridges completion. 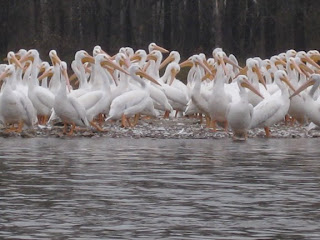 It was an easy day paddling as I had no reason to push it. In the warmer part of the day I even I had my spray skirt open for a bit thinking it might dry out my cockpit at least a little. My new thinking in how I outfit myself for the day is to keep myself one step above misery. In the event that I slide into that state, I can add clothes or gloves to improve my outlook, without having to get my gear unnecessarily wet.

As we approached the town of Buffalo, IA, I remembered Bill mentioning that there was a campground just on the side of the river. As we were pulling up to the boat ramp near the campsite there was a conservation officer sitting in his truck as if to see what we were up to. When I pulled in and posed the question, “are we permitted to camp here?” I received the reply, “not really”. In the end though, as we were only staying for one night the kindly officer permitted us to set up camp. Earlier in the day Kobie made mention of the fact that if he were to camp near the railroad tracks we would have to find a campsite with picnic tables and electricity. Viola, we had just that.

It was a cool and foggy night, perfect for watching “A League of Gentlemen”, a dark comedy from the UK that Kobie and I have taken to watching as he has all the episodes on his computer. Other than and sitting and typing this, our night involved listening the periodic train and sleeping.
Posted by Kevin Knieling at 11:06 PM