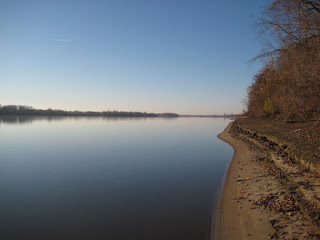 It was the coldest night of the trip, the mercury pushing down to 18 degrees overnight. If I was talking Celsius, that wouldn’t be so bad, but no, it is Fahrenheit. There was ice frozen to the inside of my tent from the condensation of my breath. I woke to a combination of a deer grunting, a barge passing by and the cold. While I wasn’t particularly fond of the idea of getting out of my sleeping bag, we had already slept longer than usual and had to get paddling.

If I am forced to stick to the title of my previous days post, I would be required to cede my Kingdom, or lack thereof. The sky was blue without so much as a hint of white; the morning was as glorious as could be imagined. I was cold and I was able to see my breath, but that was going to be a constant throughout the day as the temperature wouldn’t climb out of the 30’s

It is days such as this one that gives me hope for it being the end of the rain & cold, but I am sure that isn’t going to be the case. I checked the weather radio and didn’t get much of a signal, but made out “16 degrees” among the garbled sound. I was hoping I was picking up a signal from up north. Way up north. 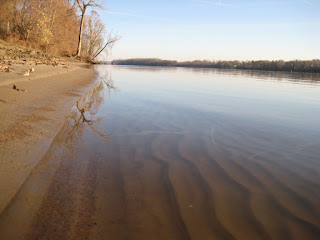 There was only the slightest wisp of south wind barely rippling the water. It hardly seemed as if we were on the Mississippi River at all. It could have been a lake as still and quiet as it was. The first sign of life we evidenced on the river was a US Army Corp of Engineers barge blocking the entire channel of the river to dredge sand from the river bottom. They were still trying to build up one of the levees that washed away back in June.

Lock and Dam # 20 was non-event as we were able to paddle right on in, descend the five or six feet and continue on our way. The lockmaster told as about the flood damage in the area from the late spring. He mentioned that waster was running over the dam and pointed out the high water mark on the lock building.

After leaving the dam, as is usually the case the water was choppy for the next half mile. The water remains turbulent coming through the dam, but in this instance we weren’t so sure if it would continue. Fortunately though the river flattened, giving us a smooth finish to cut through as we paddled. 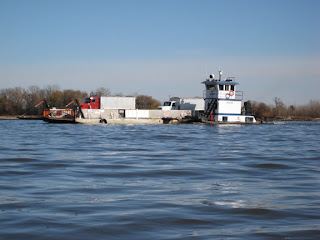 Also just south of the Lock we had to dodge the Canton Ferry which shuttles vehicular and cargo traffic across the river. The ferry was started in 1844 bringing wagons across the Mississippi that were heading west. While today the ferry was bringing across a couple of trucks, I thought about what it would have been like to be a Forty-Niner, heading west in search of gold and better fortunes. Now that is adventure. The two 195 horsepower V-6 diesel engines on the present day ferry would have been two horses walking on treadmills connected to paddlewheels. It would have cost me ten cents to cross the river on foot, or 50 cents with a Team and Wagon. A Bald Eagle flying overhead snapped me back to the present.

The wind picked up to the five to ten mile per hour range just as we were about to stop for lunch. The temperature was 36, but tolerable in the shining rays of the sun. When we got caught in a breeze though the weather dropped to about 29 with the wind-chill. The wind just affects what we do every day to such an extent that it I find it almost more important than other weather factors. As I am a finance/numbers guys I figured I would throw out the formula for calculating wind chill as presented by the National Weather Service. The formula looks something like this:

where A = Air Temperature and W = wind speed in MPH

Or you could just use a table that gives a good estimation of the wind chill adjusted temperature using the two variables. I was just hoping that with the southern wind warmer temperatures were in the offing. 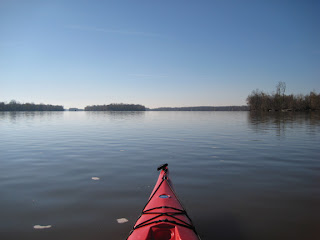 While we stopped for lunch I had a few phone calls to make and it seems that I have been having a rough time with gear. Among other calls I rang the place I ordered my new sleeping bag from to confirm it would arrive this afternoon. I was told that there are a number of notes regarding my order with the last one being that they forgot to ship it. That being the case they were going to overnight my sleeping bag, but it meant that it wouldn’t arrive in Quincy, IL until tomorrow; a town that we had intended on passing this afternoon. We had no choice but to spend the night in Quincy and wait for my bag to arrive “sometime before noon” tomorrow.

Once we knew that we would be in a town and only had a half dozen miles to go we stepped on the gas. The river was running harder than it had been helping us along, but we gave it a little extra as well.

There was a boat ramp right near the center of town with numerous motel options a short walk from the river. While the walk was less than half a mile, we did have to climb a steep hill. No less than a half a dozen people made some sort of comment like “that looks like a workout”, or “You realize it is November 18th”. It was a great day on the river though. I would take a week of November 18th’s over a single October 22nd.

It seems that on the river things in the distance don’t take nearly as long to reach as they did previously. We are moving faster as evidenced by the fact that even in a relatively short day we still knocked off 28 miles, clocking our highest daily average moving speed to date at just under five miles per hour.

We settled into a hotel where we were able to slide the kayaks right into our room with only a little rearranging of the furniture. We got cleaned up and walked out into downtown Quincy, IL.

Went for a walk looking for something to eat and were directed to an Irish Pub by an inhabitant of the town. So we ended up at O’Griffs stuffing our faces, rinsing our food down with a few microbrews. As we were eating we were recognized by a guy who saw us pull our kayaks up the hill. The fellow worked for the US Army Corp of Engineers. He worked for the vegetation division or some such thing. I would never have guessed that the Corp was in charge of the vegetation along the river. Our tax dollars being spent.

Getting back to the motel I checked the status of my expected shipment and realized that it wasn’t slated to get there prior to noon, but rather before the end of the day. It may only end up being a few hours difference, but to us that is all the world.
Posted by Kevin Knieling at 9:11 AM