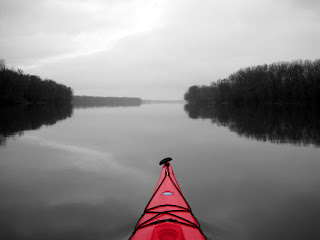 As I was nodding off last night I couldn’t quite tell if rain was making an odd noise hitting my kayak or if some small animal was trying to get in. I was lying wrapped up in my sleeping bag for the better part of five minutes listening to what might be outside but in the end decided that it was just the rain. The rain tapered off at midnight, giving me some hope for a decent day, especially as the temperature didn’t drop below 40 overnight.

The morning was foggy and heavily overcast, but free of rain. As we got on the water it was dead calm. There wasn’t so much as a single ripple that was disturbing the surface of the water.

We knocked off the first ten miles of the day in what seemed to be an inordinately short time. In the morning we saw several squadrons of pelicans, which is becoming a common sight, as well as a handful of Bald Eagles and a few duck blinds along the river in the morning, but little else. It was a relatively quiet morning on the river. 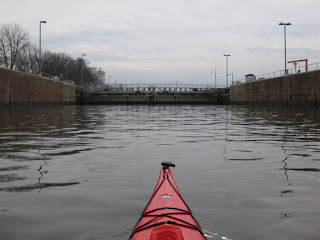 As we neared Lock & Dam # 17 I saw one barge in the lock as well as one below waiting to come north. As it wasn’t a particularly poor day weather wise and we wouldn’t have been miserable waiting, the lock said he would get us right through. We were told that by the time the one barge moves south and has given the northbound barge enough room to enter the lock, he would be able to the fill the lock and get us through before the northbound barge would be in position. The whole process of locking though from the time entering the lock takes us about ten minutes, more for a barge as it has to tie off. We generally get a rope throw over the side to hold on to or if the boss isn’t around left to float in the middle of the lock. As the water is calm during the locking process, I actually prefer to just float there. 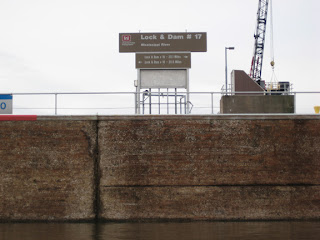 Late morning brought a guest appearance by the sun. It never really broke through the clouds, but it did make the late morning a touch warmer. The chance of rain for the day had been downgraded to 30% as it was for the following day, so I was hoping to finally have some sun by the start of next week. We haven’t had a perfectly sunny day in over a week.

Kobie and I stopped in the town of Keithsburg, IL for lunch as we knew we could find a boat ramp there. We also hoped to fill up on water while we were at it. Right at the boat ramp were several picnic tables under awnings for public use. Where were they on the days we wanted to have lunch in the rain? When we arrived the wind picked up and the temperature plummeted so that we ended up sitting up against the back of a building to get out of the wind. 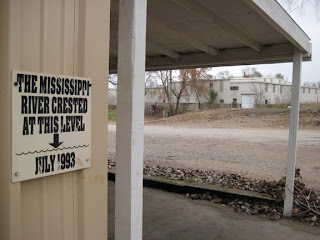 The water spigot in the park accompanying the boat ramp had all been shut off for the season, so I took the short walk into “town” to see if I could fill up. I got to what I could only guess was the main street in town. I noted exactly four businesses which included one convenience store and three bars. As a bar was the closest to me I went in, all three patrons turn their heads as I did. The bartender was kind enough to fill our water bottles and while doing so I had a chance to explain my story to the patrons. When I said that I was heading to the Gulf or Mexico, the oldest of the lot asked me what type of craft I was in. After responding he told me that I am not allowed to go past New Orleans and the Coast Guard would stop me if I tried. That was a new one. After two unsuccessful attempts to change his mind, I gave up and let him return to his beer. By then the bartender had filled the bottles and I was on my way.

After lunch the river picked up steam. At a drift we were moving at 3.3 miles per hour. Even when we took a break we were able to make some distance. When paddling we were over six miles per hour.

In the afternoon I didn’t see a single boat in the water. Not a fishing boat, not a hunting boat or even a barge. The river hardly looked like one that is responsible for transporting millions of tons of cargo per annum. What I did see though was a lone duck decoy that must have broken free and was caught in a branch on the side of the river. I figured I would take it along as a gag. I ended up giving it to a hunter I saw later in the day.

In the afternoon we briefly spoke to a guy taking that was taking in his dock for the winter. We knew of a State Park a little further down river and figured he might have a little information for us. He said that the park was closed, but the ranger of the park had passed away so there would be no one to stop us from camping there if we did. As it was Friday we were a little concerned about the usual shenanigans that kids are up to, especially by ourselves in a deserted park.

We arrived at Delabar State Park and decided that it would be a suitable place to camp for the night. We also went under the assumption that the most obvious would be the least obvious. Instead of trying to hide ourselves in the park, we camped right out in the open in the designated camping area. Several cars drove along the main road, one quite slowly presumably checking us out, but no one gave us a hard time.

We set up our tents and gathered wood for a fire. All of the wood has been damp for the last few days so we have taken to using our cooking stoves to get the fire going. We could rub two sticks together if we wanted to, but there is no sense in reinventing the wheel. We cooked our bratwurst over the fire and finished with marshmallows. While we are on a mission, so to speak, it doesn’t mean we can’t have a bit of camping fun.

The night didn’t end well for Kobie or myself. Much like I did the other night with a pair of shorts, Kobie had singed several holes in his rain jacket. If that wasn’t bad enough, my knife snapped in half as I was splitting wood for the fire. Oh yeah, then it began to snow.
Posted by Kevin Knieling at 12:13 AM