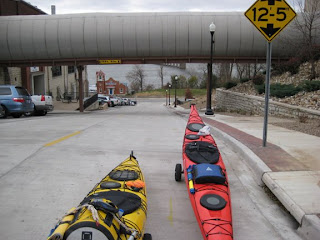 So we had forgone a day of paddling in 60 degree temperatures with perfectly sunny skies. What I awoke to today was completely overcast skies, 20 to 30 mile per hour winds and according to the local weather, a temperature of 34 that feels like 27. It hardly seems like a good trade off waiting for my new sleeping bag.

As I was again waiting for UPS to arrive, it gave me a chance to check out the news. While I don’t think I would have made the call that oil would drop to below $50 dollars a barrel, I knew that $147, the all time high, was way overvalued. Another good tidbit was that jobless claims were at a 16 year high. If I was thinking about going back to work, now would certainly not be the time.

I sat in the motel lobby like a kid on Christmas morning waiting for his present. Shortly before mid day, Santa Claus in a brown UPS suit had my package. I traded him the incorrect one right away. I had a tense couple of minutes walking back to the room hoping the right sleeping bag was inside. It was. I gave it the quick once over to ensure there were no egregious defects in the material or workmanship. For $360 it should have a built in heater.

We packed up the boats and checked out. Kobie waited while I ran to the post office to send off my old sleeping bag (I took the belt and braces approach) and shortly thereafter we were off. It was far easier going down hill than when we had to come up two days prior. When we arrived at he boat ramp there were waves breaking upon it. The wind was out of the northwest, which would be beneficial, but would still want to shove us to the side of the river. As we got out on the river I had a case of sensory overload. We were paddling all over the show as random waves were throwing us about and had three tugs to contend with, on each front left and right and one coming from behind. It was the busiest little section of river we had been on. After making several changes in course, we wound up taking the least logical by staying right in the main channel. The tugs were moving barges along the sides of the river, so the middle was the safest place for us to be

It seems like we are traversing through one lock a day. Lock and Dam # 21 had a northbound double length barge just entering the south side, so we were advised that the wait would be in the 45 minute range. It made sense that we would have to wait as it was cold, windy and generally undesirable to be sitting in the middle of the river bobbing up and down like a cork.

I inquired about portaging around the dam, but was given the negative, with the caveat that as they were doing construction on the dam and it may be possible on the Missouri side of the river. As Kobie and I had nothing to do, we decided that it would be in our best interest to check it out. The worst case scenario would be that we would find no way to portage and we would have to paddle back. At least it would have kept us occupied and generating body heat.

It would have been impossible to see the edge of the dam were it not the feeding ground for a number of birds perched along it. There was very little current, so I had no fear of being pushed over the dam and as it was, the top of the dam was wide enough to drive a truck across. 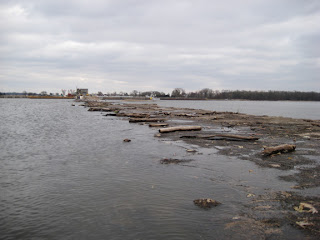 We followed the dam to the shore and saw a potential way to portage, but the small section of river that ran along the dam was blocked by a large prickly shrub that had fallen halfway into the water from the eroding bank. I managed to poke the nose of my kayak through the bush and swat away some branches with my paddle. Kobie came behind and had intended to hold some of the branches out of the way as I paddled through but instead he was poked in the eye by a twig and kept drifting forward, the nose of his kayak hitting me square in the left elbow. I didn’t really need that, but I guess Kobie got even for when I jabbed him in the ribs with the nose of my kayak back on the Red River.

We were able to get he kayaks over the dam and back in the water on the south side of the dam. One benefit of having paddled to this side of the river is that it left us on the proper side of the river to hide from the wind. While several miles south of the lock & dam I saw the second half of the initial barge being pushed out of the north side of the lock, so our decision to portage was a time saver, though my hands were now bitter cold.

As we only started paddling shy of two o’clock it was an extremely short day, but even so we managed to get 12 miles downriver including having to portage. We choose a nice island and as soon as we exited the river anything that was wet froze. Even the elastic cords that hold things down on our kayaks were no longer elastic, but rather solid frozen rope. My water shoes were a brick within five minutes of taking them off.

We made ourselves a nice little campfire to dry out our gear and warm ourselves up. As we were sitting around the fire I noticed stars up above. It gave me hope the next day would be sunny if not warm.
Posted by Kevin Knieling at 10:10 AM