My Kingdom for a Sunny Day 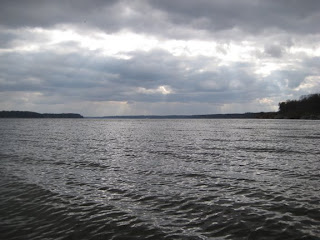 The temperature was below freezing upon waking but my tent was mostly dry both inside and out. By the time we got on the river it had warmed slightly, but only enough to turn the precipitation from snow to sleet and freezing rain. At least we had one day without precipitation yesterday.

Early in the day we crossed the river to try and escape the wind as well as cut the corner of the river. The river is starting to get much wider than it had been in that I could now measure it in miles. When getting out in the open water I took a few errant waves in my lap.

Arriving at the other side of the river I saw a half sunken pleasure boat about 20 feet in length. It was only one of the many pieces of debris on the river. Much of the debris falls in the smaller category though such as foam coolers, bits of rope and plastic bottles. While it is not all that pleasant to look at, I honestly thought I would see more in the way of debris on the riverbanks as well as flotsam if not jetsam.

Late in the morning the sun made an hour long appearance from behind the clouds, giving us a tease. When it hid itself again I got a good chill. There was an eight mile section of river where we were on the wrong side with respect to the wind, but as the river was going to turn in that direction and the river was pushing two miles in width, we weren’t about to paddle across to the other side to paddle eight only to have to paddle two moles back across. As the wind had two miles of a run up before reaching us, we were buffeted by both the wind as well as the waves it created.

After the eight mile section of river the river turned so that the wind was at our back. When I saw the sun once again peek out I thought that our fortunes had turned. Shortly thereafter though, snow began falling. As undesirable as that was, I still found it infinitely preferable to rain. In the cold weather it is so important to stay dry as water saps heat so quickly.


For lunch we just didn’t have the interest in doing more than quickly eating a cold can of soup. I didn’t even want to undo my spray skirt, much less get out of the kayak. We pulled in a little cover to try and get out of the breeze, but it was of little use.

A short dose of the suns warming rays made me feels as if I was paddling in the South Pacific. When the gap in the clouds closed I was snapped back to the reality of paddling on the Mississippi in mid 30 degree weather

The wind picked up as we approached Lock and Dam #19. When I radioed ahead I heard some laughter on the other end. We were clear to come through and when we pulled in, the guy asked what the heck we were doing paddling at this time of the year. 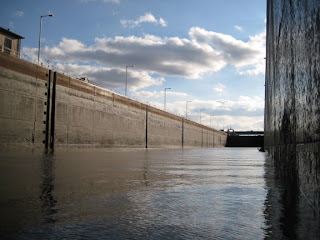 Lock & Dam # 19 was the most unique of all the locks we had passed through on the Mississippi River, no only as it was the first lock built on the Mississippi, but also that the dam attached is not owned by the US Army Corp of Engineers. It is owned by a local hydroelectric power generation concern. Another thing that makes this lock unique to us was that it was a 36 foot drop, not the usual 10 or so feet. When we entered the lock we were at the level of the road bridge just ahead of us. The lock was Brobdingnadgian in comparison to the other locks through which we had come. Not only was the height of the lock much higher, but it is also 1,200 feet long, twice that of most other locks. The best stat of all though is that it takes an even million gallons of water to fill one foot of the lock, meaning that they had to displace 36 million gallons of water just to float two kayaks down the river. Now that is how I like to see my tax dollars spent.

While the wind was pushing from behind it was still cold. As the day wore on the clouds slowly began clearing, giving the sun rays a clear path to warm my body ever so marginally.

When we arrived at an island that appeared to be an ideal camping spot we saw a Bald Eagle in one of the trees, which we take as a good omen for no particular reason. Looking a little closer there was a cabin on the island, so we had to continue on. Less than a half mile down on the same island we found an area of the river with easy egress as well as a flat area to set up a tent. I didn’t see a single “No Trespassing” sign, so I felt comfortable camping there. While I didn’t believe the cabin to be occupied, even if it were, we had a reasonable distance between us that even with our fire I felt we would go unnoticed.

It was 4:30 and the first time I had gotten out of my kayak since seven that morning. My legs were stiff and I was shivering. As we pulled the kayaks out of the river all the incidental water on it froze in short order.

While a fire warms, so does the process of starting one, or at least collecting fuel for the fire. Running around, quite literally for me mind you, gets my blood flowing and begins the process of warming. On cold, wet days in the kayak I look forward to the end of day fire. It will be nice several weeks hence to have a fire because we want to and not out of necessity to dry our gear.
Posted by Kevin Knieling at 9:01 AM