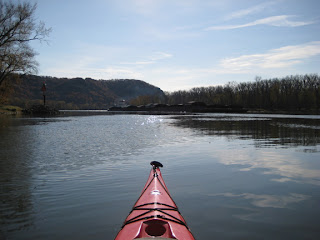 The night was colder than expected and our tents were soaked with condensation and dew when we awoke. While it was in the upper 30’s upon emerging from the tents, it must have been colder before dawn as there was water frozen on the deck of my kayak. Again, there were only a few more clouds than the day previous, but there still wasn’t really much cloud cover to speak of.

The bigger story of the night though was the trains. I could insert any begrudging expletive right here and it couldn’t be more apt. We were way too close to the train tracks and it was not like there were only three or four trains throughout the night, there were nearly a dozen. I may not have woken up for others, but I can’t be sure.

It is a Federal mandate that when a train passes a road crossing, it must blow the horn four times, in the series of long, long, short, long, holding the last tone until the engine is through the intersection. Listen for the horn pattern next time you hear a train horn. This RV park/campground was almost on top of a road crossing so the horns were blasting all night.

Another federal mandate is that a train horn has to be no fewer than 96 decibels, which is just slightly less than being in the front row of a rock concert. Imagine having Metallica playing an abbreviated song every 45 minutes while you are trying to sleep. It could be worse, as at an intensity of around 130 decibels is the threshold of pain, while an eardrum would perforate at 160 decibels.

As if the noise of the train wasn’t bad enough, I could feel the ground vibrate as the train passed so even my earplugs didn’t do the trick

Nearly immediately upon setting off in the morning Lock and Dam # 8 was in view. As we were paddling on a straight section of river, the lock was five miles away. We stared at the lock for over an hour as we paddled towards it, growing ever larger in our view. We passed thorough Lock # 8 without incident. The process of going through the locks has become humdrum, other than the odd chat to the folks working the lock

While we had noticed earlier that there are invariably people in fishing boats trying their luck behind the dams, this particular dam had barely an open spot of water. It was Saturday and a nice one at that, so I expected a few more fisherman, but there were near two dozen boats on the water and probably an equal number of people fishing from a pier on the side of the river. 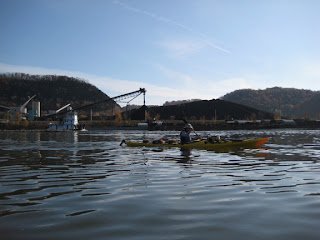 Also on the south side of the dam was a coal fired power plant. There was a heap of coal outside that stood over 100 feet high. Not only that, but there were at least another dozen barges, each 200 feet by 35 feet, laden with coal waiting to be unloaded. There was a bucket crane operator, lifting out the coal from the barges. At the end of an eight hour shift I can’t imagine he would have made a dent in unloading the barges.

As much coal as they had at the plant, we had to contend with a barge as it came up river, all 600 x 100 feet of it. It was coming around a bend in a narrow section of river, but as it was moving so slowly, it didn’t cause much of a wake. While there was a minimal wake, any ship of that size will generally get me to pay attention to what I am doing on the water.

We were paddling through an area with lots of sea grass. With each paddle stroke I would come up with a few fresh strings of seaweed hanging off my paddle blade. There were plenty of hunters in the area and we had the opportunity to see a couple of hunters blast a few ducks out of the sky just in front of us but thankfully in the other direction. 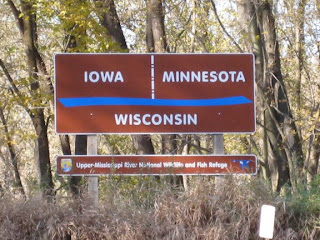 By late morning as we peered to the right of the river there was a sign indicating that we were entering Iowa. Wisconsin was still over on the east side of the river, but on the west, we were leaving Minnesota for Iowa. Minnesota had treated us well. We spent nearly two months paddling the borders and though the state and met so many fantastic and unbelievably hospitable people that I was almost sad to leave.

As we left the state of Minnesota I no longer had maps for the river. I wasn’t going to carry every single map with me for the entire trip, so I had the rest of the northern section of the Mississippi River maps sent to the family friends we were going to visit. While Kobie still had his GPS, it almost seemed inadequate not having a paper map in front of me. In truth, we have used many different maps produced by different organizations in conjunction with the GPS quite well.

While pulling up to a sandy beach from lunch created by dredging, I got something stuck in my skeg rendering it useless. At lunch I was able to work the skeg out, but then could only get it partly back in. I would have to take the entire skeg off to clean it out, but it wasn’t going to happen on a sandy beach.

The beach areas are ideal as they allow for easy egress from the water, but they also give us room to spread out our gear to dry. Most cold mornings our tents are full of condensation and/or dew. As we can’t sit around and wait for them to dry, we pack them wet after giving them a wipe down. Another bit of gear to be dried is our sleeping bags. The hood of the bag gets cinched tight around the face and when I exhale the condensation from my breath moistens the part of the hood near my mouth. It is all part of the fun of cold weather camping.

In the heavier boat traffic there were captains that fell in every courtesy category. It is common courtesy to reduce speed in a motor boat when passing a non-motorized watercraft so as to not swamp them with the wake. Some gentleman would putter along, moving only slightly faster than the speed at which Kobie and I paddled, giving us a wide berth. There was another boater that as we paddled past decided it was time for him to go and fired up his engine taking off at full speed cutting right in front of us. The boater stopped up river and was going to get a gentle reminder about boating courtesy, but he again whirred his boat into action and motored further downriver before I approached. 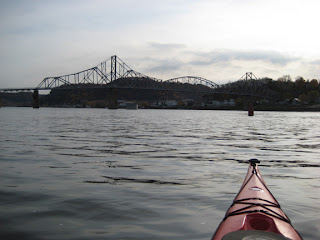 I had to make a call to set up the meeting in Prairie du Chien, but I didn’t get cell phone service. As we were passing the town of Lansing, IA I figured I should stop and use a payphone. It seems that Lansing has but one pay phone and at the time it was inoperable. I ran around looking for another phone, but there was just the one.

Leaving Lansing we were being chased down by an 800 foot barge. The barge wasn’t traveling much faster than we were and it was quite disconcerting having it run behind us. I was constantly looking over my shoulder in what seemed like a slow motion scene in a movie. It was like a 100 ton Damoclean Sword.

I ever so briefly got cell phone service and made a call that began with, “this has to be very quick”, not something most older folks can understand. I do however remember the days of my youth when my mom used to call Germany with a stop watch to see how long she was on the phone. I made arrangements to meet our family friends the day following, but would call again in the morning 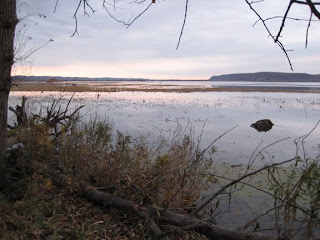 As we came out to Lake Winneshiek, there was a series of small islands, one of which was a perfect place to camp. The water getting to Island 191, as it was labeled on Kobies GPS, was only a few inches deep, so it took some work, but it was entirely worth it. Another small drawback is that the island was overrun with spiders, but there was plenty of level ground with ample tree cover from both wind and precipitation, should there be any
.
Thanks in part to the southerly breeze that blew all day it was a very warm night, hovering in the low 50’s. While we didn’t need a fire for warmth, we have sort of grown accustomed to having a fire, so lit one anyway.

We cleaned out our kayaks of any and all dinner food as we knew we would be in civilization the following day. After eating we spent the rest of the evening sitting with our backs against a tree, facing the fire and typing away on our laptops. It was another one of those times where we deviated from the way the early explorers would have done it.
Posted by Kevin Knieling at 9:56 PM