While it was cold, I was surprised to not find another layer of ice on the inside of my tent. Everything was damp though making me thing about the dew point. The dew point very basically relates to the level of water saturation in air. The dew point number that you might hear is the temperature that air must be cooled to for water vapor to condense into water, leav ing behind, well, dew. There are some other factors but you get the idea.

What I also noticed was that sand had made its way into everything. Camping on sandy islands make for a soft bed, but the sand just gets everywhere. I guess it is still better than the mud on the Red River.

I didn’t have the most stellar of mornings. For starters my tent poles froze together, which took more than a little work to free. Then as I was getting in my kayak on a shallow bank one of my gloves blew in the water. As if that wasn’t enough, when I reached in the water to get my glove, my hiking boots which I put on my deck in anticipation of putting them in a hatch, fell in as well. Next up as I paddled away, my skeg was once again frozen, so I did without that and to round things off I got myself stuck on two separate sandbars just trying to get away from the island. 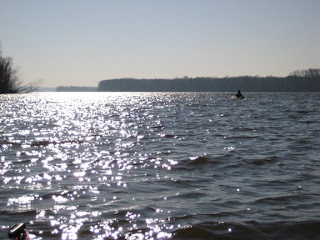 We were running low on our supply of water and were hoping to find someplace to fill up so we paddled across the river to towards the town of Hamburg, IL. As we were crossing the channel a 1,000 foot barge was making it s way up river. As I wasn’t having the greatest start to the day I decided to let the barge pass instead of play chicken with it, as getting run down by a barge would have done nothing to improve my outlook on the day. I was rather frustrated.

We weren’t in dire straits for water but it feels better to have a reserve. We could always boil the river water, though with the black water stains that it leaves on everything it touches, I’m not so sure I would like to We paddled past the town and didn’t see anything in the way of businesses open, so we continued on. It was too early to start knocking on doors on a Sunday morning.

The sky was clear and the day was warming up nicely. As the sun rose higher in the sky and melted the ice off my deck bag, it seemed to have the additional effect of melting away my annoyance of the morning. It was just a fun morning paddling. When I stopped to chat with Kobie I was unpleasantly surprised that we were only averaging 3.5 miles per hour. It felt at least like five. The south wind, while brining in warm air, was impeding our progress.

We had an early lunch on a sandbar and dried out our sleeping bags and tents. It seems that my shorts get completely soaked each day by lunchtime leaving me to dine in my underwear as I attempt to dry them out. When leaving the island I figured that my shorts would just get wet again so I decided to leave them off and paddle without them. As I was covered in my kayak no one would be on to me.

The Lock of the day was number 25. I didn’t realize that they do not monitor the same radio frequency as the previous locks do. It took me a couple of minutes and a few requests on the wrong frequency to get someone. In congested areas, the locks have to use different radio frequencies so as to prevent confusion of radio messages.

We were hoping that someone would be around and perhaps they could fill a water bottle for us. It seems though that the people working the locks are much different in the southern locks than the northern ones. Up north the people working the locks are friendly, almost campy whereas down south it is a much more industrial river and it is everything we can do to just get them to open the lock doors a third of the way to let us in and out. Some of the locks only opened the doors part of the way allowing us enough room to sneak in with a small buffer on each side.

Leaving the southern end of the lock it felt to me like the Mississippi River. The river widened further and there was considerable barge traffic, although thankfully not near the lock when we were passing through. 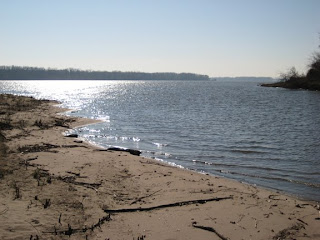 The afternoon was as warm as I could have expected. It was the first day in a long time that I was able to wear my visor instead of my wool hat. I was also able to leave the gloves in my day hatch and feel the carbon of my paddle on my hands. I could almost get used to this.

In the afternoon we made another effort to obtain some water by asking a gent on the side of the river that we had struck up a conversation with. He was hard hit in the flood and was waiting for his house to be lifted on stilts so he didn’t have running water, but did have a 25 gallon jug full that he was happy to share. It was just another instance of people being as kind as could be on this trip.

Just past our water fill up I spotted the first confederate flag of the trip, so it reinforced that we were heading south.

It clouded over late in the day; it was perfect. It was sunny all day and then cloud cover come in to hold in the warm air. We paddled later than usual to try and get in at least 25 miles, which we barely missed having had to fight the wind all day, but it was nice to get to camp and not to have to throw all my clothes on just to keep warm as I watch all the water on my kayak turn to ice. I stayed in my shorts while setting up camp and were I to not have dunked my shoe in the river probably wouldn’t have wanted a fire.

At camp my computer battery died so it gave me time to sort through some things and take care of a few of the mundane tasks that have to be done. As I got everything squared away and crawled into my tent it started raining. It only rained for a few minutes, but I was safely inside. Kobie was not so lucky as he was rudely interrupted while answering natures call.
Posted by Kevin Knieling at 11:02 AM