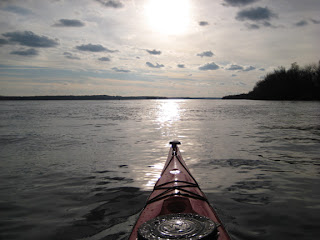 I must have been tired as it was 9:30 when Kobie woke me. I was up until almost three trying to get an update or two posted, but I figured we would be up a little earlier. We just made the 11:00 checkout by the time we got everything packed.

While the trip to the motel was four miles, we were able to cut that nearly in half on the walk back in a much less circuitous manner. Just a word of advice; if you are ever looking to start a conversation, tow a 17 foot kayak behind you. Everyone seems to want to talk, or at he very least make some sort of comment. We had odd bits of conversation with at least a half dozen people on the walk back down to the river, including with an older gentleman who asked the same few questions regarding our trip over and over again. Our route also took us past a convenience store and as late as it was, we figured we might as well stop for lunch before getting on the water.

I think today officially took the title of the latest start of the trip, beginning to paddle shy of one in the afternoon. I didn’t mind as it gave us 24 hours off from paddling since arriving in Burlington. It wasn’t quite a rest day with all the running around we had to do cramming so much in such a short time, but at least we weren’t overexerting ourselves paddling.

As I was tightening one of the straps on the seat of my kayak, the buckle snapped off the strap. At first I was quite angry, but at this point it is what I have come to expect of the poor quality of Wilderness Systems kayaks. I did the best I could to keep the strap tight.

Several people watched us off from the boat ramp below the Mac Arthur Bridge spanning Burlington, IA and Gulf Port, IL. The skies were mostly cloudy, but it was still a big improvement from the last week. We were hoping that we had the worst of the foul weather behind us and if the local meteorologist was to be trusted, it was. 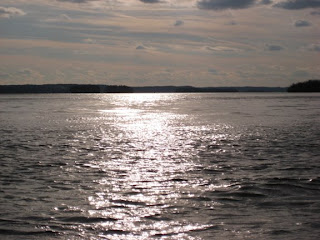 Following the river channel there was a medium current helping us out, allowing us a cruising speed in the upper four mile per hour range. As soon as we got underway a barge came at us forcing us to move outside of the channel reducing our speed. We also had the railroad swing bridge swing close above us after the barge had passed through.

For the last few days my left shin has been hurting. I wouldn’t think that I could sustain a leg injury on a paddle trip, but stranger things have happened. At this point I am not sure if it is related to the same injury I incurred on the Appalachian Trail or not, but either way it isn’t fun. It seems that when I get out of my kayak the symptoms are mollified, but as we head further south and the river opens up, there will be fewer chances to get out of the kayak.

We managed 12 or so miles before running out of camping options downriver, so we ended up on the relatively exposed Grape Island. Just before going ashore I noticed a deer walking along not far from the bank. I tried to drift at its walking speed so that I might catch a glimpse. As I was about to get out my camera the deer came to the river and it was a large 10 or 12 point buck. I hadn’t gotten my camera out, so if I attempted it then, the deer would have run. It was cool to see from 20 feet away. Another thing I spotted on the shore was a Goose decoy. It was much larger than the Mallard duck decoy, but I thought I should try and find as good home for him as well. One positive thing about Grape Island was that it was rich in firewood. There was an ample supply of downed trees and with the temperature projected to be in the 20’s, going to sleep warm initially would be a good start. While I ordered a new sleeping bag, I haven’t yet arrived in the town where I was to pick it up. My other bag was losing its down insulation at an unacceptable rate. Each morning my tent looks as if someone shot a goose with a shotgun slug and all the remained were the feathers. Being out in the cold all day and then not having a warm sleeping bag to cocoon in isn’t much fun. I don’t always need to be warm, but never being warm is where I draw the line.

Inasmuch as we already had a fire going we cooked up some sausages for dinner. To round out the night Kobie pulled out the marshmallows.
Posted by Kevin Knieling at 8:58 AM