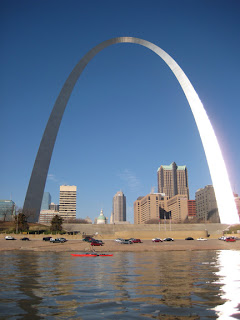 Tony gave us a brief tour of St. Louis before dropping us back down at the river. There were many historic homes in the city, including a number of row houses near Lafayette Park.

It was a wonderfully sunny morning, so instead of getting right in the river we ambled up to the park to take some photos before setting off. After getting on the water we took yet more photos, but we quickly drifted downriver. As we were not yet finished taking photos, we had to paddle upriver. Trying to paddle upriver was a futile effort. If ever I had any thoughts of kayaking up the Mississippi River, my mind was freed of the notion in its entirety. Staring out morning at a national landmark was such a great was to start out.

We quickly left St Louis and the Gateway Arch behind as the river was still only several hundred feet wide and running strong, picking up exactly where it left off the day before. The barge traffic on the river was akin to what I might experience on the West Side Highway in New York City at five o’clock on a summer Friday. There were barges, tugs and all manner of other boats cruising about. With the current of the river running as fast as it was, the downriver boats moved much faster than in the past. To add to the barge density on the water, there were many barges simply moored in the middle of the river, at times in large numbers. I had 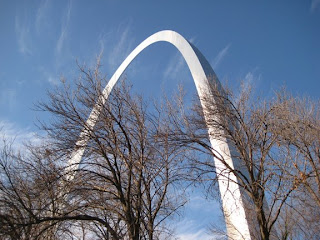 to keep a vigilant watch to ensure that no boats snuck up on us. The bigger problem was that all the movement from the boats created waves going in every direction, at times rebounding off the barges parked on the side of the river sloshing me all over. The waves seemed to be much steeper than from boats further up the river. The motion of my kayak was like having the fulcrum of a seesaw being raised from two feet to four.

Another problem with all the river traffic was that I had no idea where the boats were going and what their intentions were. I had my radio on so that a boat could call on the emergency channel if need be, but they probably don’t expect a kayak to be carrying a marine radio. I always felt better when I saw even a small section of the side of a tug or barge as I knew we weren’t on a collision course. 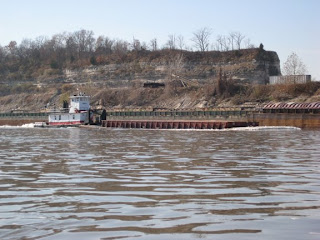 As we paddled along there was one tug and barge on the side of the river coupling with another barge, playing music over its PA system as it sat there. We yelled back and forth with the crew and then over the PA came something along the lines of “are you guys f------- freezing yet, or what? What a terrible day to ask as it was warm, sunny and just all around beautiful. Had he inquired a week ago, he would have heard a resounding yes, or to put it in his lingo, “Hell yeah!” There were several other tugs that gave us a honk and a wave. Despite being a commercial portion of the river, it was a friendly portion of the river.

Among the barges one was flying a flag from Louisiana State University. That, along with the fact that there were once again some leaves on trees, confirmed that we were on the right track. We still had over 1,000 miles to go, but we were making southbound progress.

When Kobie and I stopped to have lunch on a sandbank we were able to see just how fast the river was flowing. More impressive was a tug coming upriver that was pushing 23 barges, each 200’ x 35’. The configuration was 5,5,5,4,4 and it was impressive in size.

In the afternoon Kobie and I had a good talk about the future of the trip, how we would have to make some serious time if we are going to finish by the end of the year. We had some ideas to get back on our old schedule of rising in the dark, taking a shorter lunch breaks and paddling until dark to stretch our daily mileage. While I am not limited by time, Kobie is. While that isn’t much fun as we will have to cut out some of the interesting things we had planned along the way, I don’t want Kobie to have this trip unfinished. I know how I feel about still having some of the Appalachian Trail to tackle and even though I was only barely able to physically walk, I wouldn’t want to wish that feeling of having an trip being incomplete on anyone. We would have to average about 30 miles a day to finish in time. 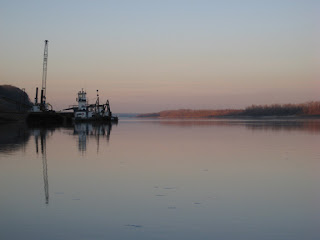 Having had our good talk about making time, we decided to head into town to resupply and take the day off for Thanksgiving as our one last big rest before making a seriously concerted effort to cover distance. We couldn’t decide as to what town we should hit to resupply and finally decided on Crystal City, MO as it was larger than some others. With the river current we overshot the boat ramp by a good distance and wound up having to once again paddle against the current. We finished the day with an average speed of 5.6 miles per hour, nearly a full mile per hour over our previous high.

As we got out at the boat ramp I spotted a truck from the local water utility pulling up to the dock, so I gave a wave. I figured a person working for a local utility would have intimate knowledge of the layout of the city, so I ran up to ask about town. Better than just telling me where I can find what, John gave me a map of the area and highlighted all the important stuff. As I thanked him and was walking back down to the boats, another fellow, Dave, pulled down the ramp and asked what we were looking for. After explaining the situation he reaffirmed the original information I had received. While still speaking to Dave, John came back as said he would give us a lift to town if we could fit our kayaks on his service truck. We couldn’t. John didn’t stop there as he said he would go get another truck.

While John was picking up the other truck, Dave mentioned that he might be able to set us up with a ride on Friday morning. Nice. 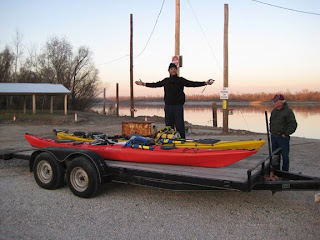 John gave us a lift to a motel and had to get the truck back so we unloaded without having confirmation that we could find a room. Room they had, but were almost indignant when I asked about a place to store the kayaks. While I was initially taken aback about the attitude of the woman, it is a numbers game. We have met so many amazing people that have been so helpful we were bound to run into someone that may have just been having a bad day.

While it would have been nice to have been settled, we were told it was a short walk to a small group of motels. As we were getting out our kayak carts Kobie realized that he was missing a wheel. That was going to be a problem. We were in the middle of town on the evening before Thanksgiving, so if the wheel didn’t turn up, there was little chance of finding a replacement. It was hard enough finding tires alone, now we also needed the hub. Kobie tried a tire shop which was closed and the local K-Mart, but came out empty handed. We decided the best course of action would be for me to go and get us set up with a place to stay and then come back with one of the tires form my cart so we could then get Kobie’s kayak to the motel.

I walked down the main road, a two lane highway with businesses on each side. There was no sidewalk leaving me to switch into four wheel drive, rolling over grass and jumping curbs to make my way down the road, dodging turning cars the entire time. I had to switch highways, which was a nightmare. I put a strobe light on the back of the kayak so that traffic would be able to spot it. I had to switch speed to dodge traffic, at times moving at a full run across heavily used roads. I was in a game of Frogger. It really didn’t help that it was five o’clock on the night before Thanksgiving. The day began with traffic and ended with traffic, just different kinds.

I was stopped on the side of the highway by the local police. He didn’t really understand what I was doing as he kept asking where my car was. He ran a check on me and called the station in the event there were any other calls about some nutcase pulling a kayak along the side of the highway. After a finger waggling that I didn’t have any light on the kayak he said I had an ill advised plan and sent me on my way. I had, or at least I thought I had the strobe on the back of the kayak, but it must have fallen off.

Two miles from the first motel I found some new digs at the Comfort Inn, Festus. The woman working the desk did all she could to find a place to store a couple of 17 foot kayaks, which ended up being an auxiliary breakfast room. It involved carrying the kayaks through the lobby, but it worked for me. I hurriedly unpacked everything from my kayak and left the boat leaned up against the front of the motel as I couldn’t get it in by myself. I grabbed a wheel from the cart and ran to get back to where Kobie was waiting.

I got back to Kobie with the wheel and we made our way to the motel with his kayak. We were able to find a route that kept us off the highway half the way to the motel and I couldn’t have been more relieved when we got there, put our kayaks in the breakfast room and fell sprawling on the bed.

At the motel we used a photo of us at the boat ramp to deduce that Kobie’s one tire wasn’t strapped down and it must have slid off while making a turn when John gave us a ride in town
Posted by Kevin Knieling at 3:47 PM