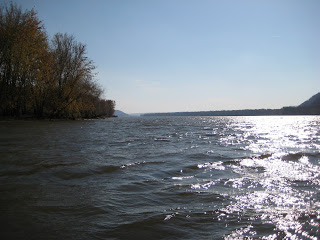 As we were staying in a motel, Kobie and I opted to sleep in. The night would have been ideal had we been camping as when we woke up just after eight, it was 63 degrees. I enjoyed a last shave and shower as we had nearly a weeks worth of supplies and didn’t know when we would next be in a town. It could work out that in two nights time we have another motel stay, but at least in carrying the supplies, we have the option to avoid towns should we so choose.

It took an inordinately long time to pack our kayaks, even longer than it normally would after having stayed in a motel, partly as I was trying to pack my kayak somewhat differently. There is a trade off between have the kayak weighted properly (generally centered, tending towards the rear) and the ease at which I can access certain things. I have a deck bag just in front of me for the smaller items, but the larger things have to go in one of the hatches. There is a hatch opening just behind the cockpit, known as the “day hatch” as it is where you should store things you might need access to during the day, but for me that would generally be clothing. I found that food fits nicely in that compartment, especially heavier cans of soup. I was now moving the food to the back and putting more in the way of clothing in the day hatch. It is like a 17 foot game of Tetris.

We bade farewell to our hosts, John and Donna and wished them well with their new motel. Hopefully the next time we pass through town it will be complete.

As it was getting late Kobie and I opted to have an early lunch at “Culvers”, a fast food kind of place. While the food is a step up from some other fast food I have had, the really winner is the frozen custard on offer. Chocolate custard with chocolate syrup has dethroned the Chocolate Extreme Blizzard at Dairy Queen as my new favorite frozen treat. As I didn’t know when I would again be at a Culvers, I decided to round out my lunch with a bit of custard. Custard is substantially similar to ice cream with the exception that custard contains egg yolk, making it creamier.

As we walked the mile and a half back to the boat ramp I stopped at a farm supply store to check if they had wheels for my kayak cart. I had gotten a new set of tires already, but they were a fair bit larger than the originals and they do not fit as nicely behind my seat. That being the case, it made it significantly harder to fit my water container behind the seat as well. Getting the water container in my kayak involved some cursing and shoving, but I had no choice but to make it fit, as I was out of luck for new tires.

Upon arriving at the boat ramp we were greeted by 15 to 20 miles per hour winds straight out of the south. It was another one of those times that I was grateful for the warm air the wind was bringing, but it just meant I would have to paddle that much harder. So much for an easy day.

By the time we got underway the temperature had escalated into the 70’s, and really, why would I want to wear a shirt while paddling at that point? Probably as it could get chilly in the wind and the shirt would prevent chafing, but I digress. I was just overjoyed that I had the option to paddle with minimal clothing being the fourth of November and in Wisconsin.

Traffic on the river was virtually nonexistent. I didn’t see a single barge on the river that wasn’t lashed firmly to a piling. After leaving Priarie du Chien we had only seen one pleasure boat on the river and he was kind enough to stop and ask if we were OK as we had been stopped for a bit of a rest. The problem with taking the rest was that we were being pushed back upriver by the wind. With the near record high temperatures though I would have guessed that a few people might have played hooky from work to get out on their boats and go fishing. It could be that most people have already taken their boats out of the water for the winter.

The section of river that we paddled was at times a mile and a half wide. While it leans towards the wider sections of water that we had paddled on this trip, the river was broken up by a serious of long narrow islands, giving the illusion that the river was much narrower. We used the islands to our advantage, ducking behind them whenever possible to escape the wind.

Late in the day I was getting a little chilly. While trying to avoid the worst of it, there were some pitching waves where I ended up getting face full of water. There was a large pool of water that collected at my feet as well. I just hoped that the pool of water was from the river and not a hole in my water container.

It has been nearly two weeks, but the streak of seeing Bald Eagles has finally ended. I kept my eyes peeled, but I didn’t see a single one. I did however see a flock of about 50 pelicans, which was quite impressive, but alas, no Bald Eagles.

As the sun began dipping below the horizon we began scouting campsites. It was great that we could camp on an island, which meant we didn’t need to camp near the train tracks on either side of the river, but as most of the islands were quite narrow, it left them quite exposed.

The wind was expected to continue blowing throughout the night and continue straight through the following day, so we did the best we could to set up camp in the shelter of some trees. It was somewhat less that ideal, but by five o’clock we had our campsite on Island 188. Many of the islands on the Mississippi River haven’t been named, but rather assigned a number. Leave it to the Army Corp of Engineers to get lazy.

By 5:15 we had our tents set up and it was dark. By 6:15 we had eaten dinner and had taken care of all the other chores that needed tending to. Kobie and I sat in the dark looking at one another as if to say, “what now?” We retreated to our tents. I had the opportunity to look over our maps and to do a bit of writing as I am well behind.

Nothing really changed in daylight savings, everything just shifted by an hour. We will go to sleep an hour earlier and get up an hour earlier. I was just hoping that we were able to cover some distance in the coming few days as the weather report from the marine radio was mentioning lots of numbers that were in the 20’s.
Posted by Kevin Knieling at 9:59 PM