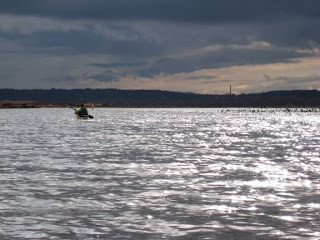 The night could well have been the warmest in the last month. I slept in nothing but shorts and left my sleeping bag unzipped most of the night. Kobie set the alarm to get us up an hour and a half before sunrise to give us enough time to pack up and use the early light to start paddling as we would now have to end our days by five o’clock.

Our morning began sitting in our respective tents trying to figure out what was causing the bright flashes of light outside. Was it the light from a barge? Was it lightening? Well, as it turned out it was both. It took both of us to get out of our tents and check things out to make the final determination.

We stood outside in our underwear trying to decide what to do as the flashes of light illuminated the sky. Despite already having had one warning shot of lightning fired across the bow on Lac Qui Parle, the final verdict was to paddle on. We got back in our tents to pack up, but after two or three minutes, a heavy rain began to fall. Our tents were less than 20 feet apart, but we could hardly hear each other shouting over the sound of the rain. At that point we changed the plan and decided to sleep in until some of the heavier stuff passed. As the rain fell, so did the temperature. I unpacked my sleeping bag again and tied to catch a little extra sleep.

When the lightning flashed, it illuminated the inside of my tent as if I had a 15,000,000 candlepower spotlight shining on the outside. It made the little light I generally use inside my tent seem woefully inadequate.

The thunder that accompanied the lightning was some of the loudest thunder I have heard in my life. It sounded like a combination of someone slamming the door of an empty 30 yard dumpster, followed by someone pushing the same dumpster off a cliff. Mixed in was the sound of someone shaking a giant piece of sheet metal. The last part of the thunder noise equation was something akin to a flat bed lumber truck with several hundred 2 x 12’s neatly stacked but loosely attached in the back, driving over a series speed bumps.

By eight o’clock the storm had passed and the sky lightened considerably. It was still windy, in the range of 20 to 30 miles per hour, but we caught a break from the rain. In thinking about it though, were it raining or not was irrelevant as we would get wet from waves and blowing water regardless.

We were thrown right to the wolves first thing in the morning with the wind and waves. The morning was an absolute struggle both mentally and physically. It took a significant amount of effort to paddle and we had to keep a hard grip on the paddle. I was already battling a bad case of tendonitis in several of my fingers and this wasn’t helping. We were just getting shoved around in the wind.

Later in the morning we were able to cut across the river channel and find some shelter in a wetland area. While we didn’t necessarily get out of the wind, there wasn’t enough reach across water for the wind to kick up any sizable waves. We then had the problem of finding the channel in the wetland area as weeds were growing through most of it. The options were to paddle in shallow water to the point where we occasionally got stuck, or do battle with the wind. As much as I dislike getting my kayak stuck, I really hate the wind. I hate it on a bike; I do not like it on a mountain or on the water. I am starting to sound like a Dr. Suess book.

It did rain on us for a bit but again it was entirely irrelevant as water had already soaked everything I was wearing. Waves had come crashing over the front of my kayak with consistent regularity.

By early afternoon we reached Lock and Dam # 11. Kobie and I were particularly excited as when we crossed the US border from Canada one of the officers who processed us said he used to work with someone who was now employed at Lock and Dam # 11; so we were to give him a message.

We had to wait a half an hour for a northbound barge to lock though before we could lock south. As the barge pulled out it was crawling at a snails pace. Kobie pointed out that you know that either you are moving slowly or the wind speed is quite high when the flag on the barge is fluttering in the direction of travel. After we finally made it into the lock there was a problem. One of the two doors on the lock wouldn’t shut. We were told that it was an extremely rare occurrence leading me to believe that they might not know how to remedy the problem. Had the lock employee said, “Yeah, it happens all the time”, I would have felt better about them knowing how to fix it, although it would be the sign of a deeper problem.

We were forced to wait on the shady side of the lock as it was being fixed, but it did give us an opportunity to relay the message we had been carrying for the last two months. We weren’t the pony express, but we did get the message to the destination. When we asked for the intended recipient of the message, we told that he no longer works there. We were so disappointed.

The problem with the lock was fixed, the water was lowered and the doors on the far side of the lock were opened. As the doors swung open immediately in front of us was a hulking barge 1,000 feet long, leaving us only a small opening to skirt past and get back out in the open, pitching water

We paddled into Dubuque, IA by skirting behind City Island in an effort to get out of the wind that attacked us upon departing the lock. While Kobie needed water, we also had to decide as to how we should proceed for the last hour of the day. We weren’t sure that we would find a decent campsite near Dubuque, especially in light of the fact that snow was in the forecast. While the word “motel” came up, there was nothing even remotely convenient in Dubuque, IA or East Dubuque, IL just across the river. East Dubuque was the northern most town along the Mississippi river in Illinois, so now instead of Wisconsin on the east side of the river we would have Illinois. 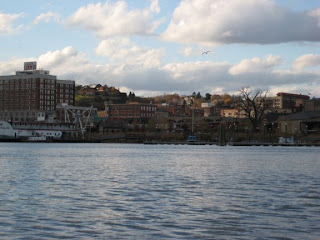 We paddled into a cove in Dubuque, which was home to a casino, several commercial boating outfits and the US Coast Guard. As there was no place to get out of the water in the cove, we looped back around and got out off the river on a sandy beach near a river walk area. We threw our kayaks on the wheels and pulled them somewhat inland. A couple stopped to talk who gave us splendid directions to a motel, but it was nearly two miles up the road involving a walk across a busy narrow bridge and mountain climbing up a hill. For all of those people who think Iowa is flat, let me dissuade you from that notion. I had people try to tell me how flat Iowa was before my Cross-Country bike ride in 2005 which took me through the state. Rest assured, Iowa is not flat.

We met another woman who mentioned that there was a Holiday Inn that was right downtown and hence much closer. She mentioned that it might run $40 a night. In 1982 perhaps. Downtown hotels generally have very little free space, not nearly enough to store a couple of 17 foot kayaks and don’t cost 40 bucks either.

We started walking to the bridge and decided that we really didn’t want to take a chance in traffic so I went to find someplace that we might be able to leave the kayaks in the area and then walk to a motel. In trying to keep with a nautical theme I started with a maritime museum, but it wouldn’t work. I remembered the Coast Guard and made a dash there by land. When I arrived at their building it was deserted. It took me a minute to realize that everyone must be on the ship sitting in the harbor. I got someone’s attention and within minutes was given the OK to leave our boats on the property. 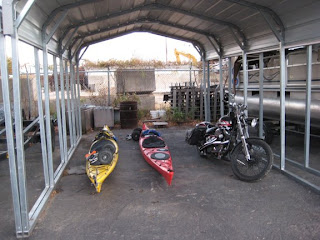 I ran back to grab Kobie and our kayaks. We got set up leaving the kayaks behind a barbed wire fence on US Government property. I felt comfortable leaving most of my gear in the kayak as I would only need a few bits of clothes, my toothbrush and little else for a night in a motel.

The fellows directed us to the “A&W”, where there was supposedly the best burger in town. As we sat eating, Cory, one of the guys from the Coast Guard walked into the A&W and joined us for a chat. We sat talking for a bit and he offered us a ride to a motel. We set up with a motel and sat around talking about travel as Cory had travelled a bit, but Kobie and I were shot and called it as night. We got to sleep in a nice comfy bed, not having to worry if there is any water leaking in from the rain.
Posted by Kevin Knieling at 8:33 PM