I was up early as usual, but couldn’t fall back asleep as I kept thinking about my package that was supposed to have been delivered yesterday. We had breakfast and packed our kayaks before checking for the package at 10 AM. It hadn’t arrived. It was so frustrating first that the bag didn’t arrive yesterday as it should have and secondly that it wasn’t looking like it would arrive before noon, the second deadline.

I also had the opportunity to try and get a new strap for my kayak seat and the map we would need for the lower Mississippi River. I should have known better as I was dealing with the US Army Corp of Engineers. It took no fewer than 15 phone calls to determine that I couldn’t get the maps without first having to send them a check. A check? I was going to have to break my string of writing only one check per quarter, each for my health insurance.

The second deadline for the arrival of my package was fast approaching. It was only at 11:30 that the package showed up. I got it back to the room to examine my new sleeping bag, but it was the wrong size! They had sent me a long version, so that if I was six foot six, I would be good. It just wasn’t my day.

I immediately called about having the wrong bag sent and the fellow I spoke to was extremely helpful. He gave me the option to use this bag until I got somewhere I could have the proper one shipped or to sit tight and they would send out the new bag to arrive in the morning. In any case they would cover all the shipping, knock 10% off the price of the bag and pick up the motel cost. I found it amusing that all the people I spoke to threw around words such as; dude, bummer and sweet. While the company I ordered the bag from went above and beyond on the financial aspect of the arrangement, the one thing they couldn’t ever give me back was the day and a half I will have been waiting for the bag. Which brings me to the next thing.

It was sunny and 60 degrees. 60 degrees! The high for yesterday didn’t break out of the 30’s and today I was sitting around waiting for a sleeping bag, while it was 60 degrees and sunny. Did I mention 60 degrees? I just know it won’t be nearly as warm tomorrow or possibly any other day until the end of the trip. 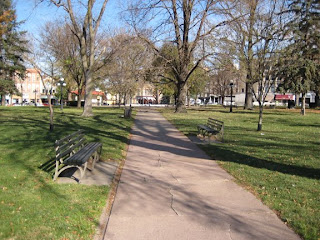 In the time off it gave Kobie and I a chance to walk around Quincy, IL and admire its history. The history of the town dates back to around 1822, when a man by the name of John Wood was checking out the land in the area that had been doled out by the government as reward for soldiers from the war of 1812.

Other settlers began occupying their land grants and shortly thereafter the area became vibrant in commercial goods, being home to many flour and saw mills. Many German immigrants also settled in Quincy, having come up river from New Orleans.

One of the aspects of the history of the city of Quincy was that it was a northern stop of the Underground Railroad for slaves making their way to freedom in Canada. Missouri, just across the river being a slave state made the use of a river town in Illinois, a free state that much more important. It is all about location. 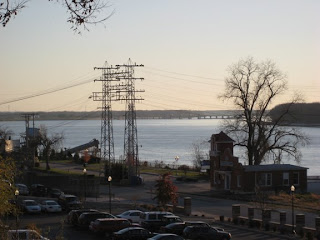 The town also seems to be proud of the fact that the sixth of the seven Abraham Lincoln / Stephan Douglass 1858 Senate debates took place here.

I also noticed that we were punching into a new sports zone. The signs and bumper stickers rooting for the Twins, Vikings and Wild were switching to the Cardinals, Rams and Blues.

While the day would have been perfect to paddle, the wind picked up in the evening and it grew colder. It was nice that we were forced to stand pat on a day of 60 degree temperatures as it was supposed to only barely break 40 tomorrow. Sweet.
Posted by Kevin Knieling at 9:41 AM