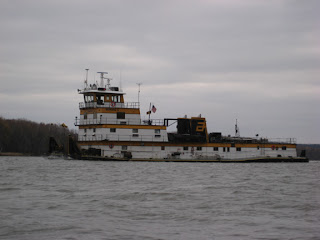 The temperature got into the freezing range overnight. I was woken several times by noises near our kayaks, but I couldn’t be bothered to get out in the cold to check it out. I assumed it was deer as I did hear grunting once or twice.

It was somewhat painful to have to step in the water with bare feet to get in my kayak and underway. I could buy some paddling boots, but I prefer to paddle barefoot. When things get really cold, as they did in the afternoon, I wear a pair of quasi-waterproof neoprene socks. For a better part of the day though I was warm enough. Not warm, but warm enough.

The wind was lighter than it had been the last few days it was still cold, but it was still nice as we had a breeze at our back to help push us along. We approached Lock and Dam # 12 within an hour of setting off and if there was one time I didn’t want to have to wait to get through a lock, today was the day. Worse yet I didn’t want to have to portage around the lock.

I called the lock on my radio and there was no immediate response. As we paddled closer to the lock the lock answered and said he would send us right through. We shared the lock with a couple of guys who were out in a small boat scouting their deer hunting spot. I told them to check out the island that we had camped on last night as there were sure deer there. It was nice to talk to the guys as it helped pass the time waiting for to pass through the lock. While paddling I was fine, but when I stopped things got cold awfully quickly.

We had passed several barges throughout the morning and some of the names are starting to look familiar. Some barges are in for the long haul, but the ones we had been seeing repeatedly were just working one section of the river.

I didn’t see much in the way of wildlife during the day with the exception of the requisite Bald Eagles. One adult eagle seemed to be showing an adolescent how to fish. As we watched, the adult scooped a fish out of the river with the adolescent in tow. A bit further on there was a tree trunk stuck in the river. The one end was sticking partially out of the water and was covered in blood. It must have been a favored dining locale of the eagles.

While it was cold, it was nice not to have to battle for every mile of river. I was able to use an easy stroke for the entire day and was able to cover some good distance. Not only is it easier on the arms, it is easier on the rest of the body as well. 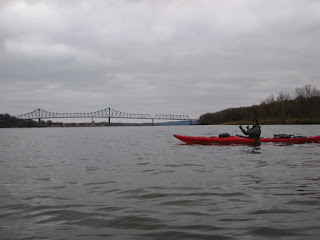 Around midday we crossed under the Highway 64 Bridge connecting Savanna, IL and Sabula, IA. It could have been a bridge like any other, but this bridge was the same one I rode across on my 2005 cross country bike ride from New York to Los Angeles. At the time I was fresh off Wall Street and had but a thousand miles under my belt on that trip when I rode over the very same bridge that I was now kayaking under. It’s funny that back then I didn’t even think what might be below on the water, or even have it in my head that three and a half years later I would be in a kayaking under where I was riding at the time.

The first photo here is from the sunny day on my bike ride, whereas the second is from a similar view, but only seventy feet lower.

The wind picked up the afternoon, so much so that I took the remnants of two waves across the face. At least the temperature had warmed one entire degree from the 36 that we noted earlier to reach the forecast high for the day. That being the case we had very little interest in getting out of our kayaks for lunch. Other than a bathroom break we remained seated in our kayaks for the duration. 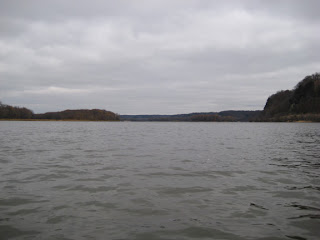 We were hungry so we had a drifting lunch. Kobie and I had talked about a drifting lunch on the Mississippi back when we were paddling against the current on the Red River. This was not exactly how I had envisioned it, toes numb, fingers stiff and shoveling down a can of cold soup as fast as possible so we could start paddling again. My mind drifted off for a bit and for some reason thought of a great pub in London called Ye Olde Cheshire Cheese. I even envisioned a nice fire crackling in the hearth, but Kobie snapped me back to reality, telling me that we were being blown off course.

By mid afternoon we were about to cross an eight mile long lake with a lock at the end. We could have made it across the lake in the remaining daylight, but if we would have had to wait at the lock, we might have gotten stuck in the dark. Also, we would have been very near Clinton, IA and didn’t know if we could find a decent place to camp near a city.

The last few remaining islands before the lake seemed to be part of a wildlife refuge and were restricted. It took a bit of searching to find island in the vicinity that wasn’t off limits, but eventually we did. We found a place to camp at just the right time as I was starting to get cold. Scratch that, I was already cold. I was getting cold to the point where it really wasn’t fun anymore.

The first thing we did was get on dry clothes and start gathering firewood. My toes hurt as the blood rushed back to them. Similar to the previous day, it took some work to get a fire started, but we managed. The island was rife with downed deadfall, so there was no shortage of fuel for the fire.

We got set up and even before dark there was ice forming on my kayak. The fire was great and necessary but we were able to cook a good meal and warm up. I wasn’t nearly as warm as the night prior, but it was colder and windier. As I was trying to dry some of my gear by the fire I burned several small holes in my shorts. While frustrating, no one will have the chance to see it other than myself as I sit in a sealed cockpit all day. I wanted to get to sleep fresh from the fire and warm as the temperature was to be in the low 20’s overnight. It makes for a brisk nights sleep.
Posted by Kevin Knieling at 9:54 PM