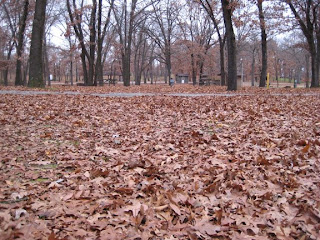 We spent the night uninterrupted in the campground other than a police cruiser passing through, though not stopping to so much as acknowledge us. As we were getting to the water a duck hunting boat was pulling up to unload one of its two passengers as he had to go to work. I thought it would be a good time to lighten my load and part with our Mallard Duck decoy so gave it to the hunter.

In the early hours we fought some wind, though it did ease up as the morning wore on. For the most part we had the cold wind and clouds working against us. It wasn’t long after getting on the water that I mentioned to Kobie it would be a perfect motel day, not least of which that we were running low on food, water and clean underwear. The afternoon was also supposed to be the last of the worst part of the weather for the coming days, so it would also be nice to get everything dried out and actually be able to keep it dry for at least a few days. The closer for me was that the overnight temperature was going to be in the low 20’s and my sleeping bag hadn’t really been doing it for me in the way of keeping me warm. Most sleeping bags are temperature rated as at what temperature they would keep the user warm. The only problem is that there is no fixed rating system, making the ratings subjective and variable between each company.

As I was getting into a rhythm paddling I was halted by Lock and Dam # 18. My prediction model of waiting at locks was once again correct that we weren’t going to have to wait on a relatively pleasant day. There was a crane barge that was going to lock through in front of us, but it got spun around in the wind and had to circle around to try again. As it would take at least 15 minutes for the barge to give it another go, there was a little window for Kobie and I to slide on past.

Further down river we ducked into a narrow river section that was behind a long, narrow island. As we paddled along we came to low water over a wing dam. Wing dams are small underwater dams that keep the general flow of the water going where the Army Corp of Engineers deems it should go, namely in the main channel. In this case I could see the top of the rocks used in constructing the dam just poking out the top of the river. There was however a small break in the wing dam where all the water was funneling. As there was no going back I took the ride through, which felt a bit like a water slide. 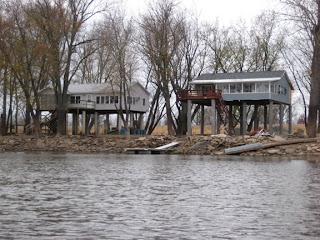 In the area along the river there seemed to be a lot I the way of construction. Some homes looked brand new, whereas other seemed to have new concrete pilings under them, lifting the home some 20 feet of more off the ground. I also noticed that some of the older homes that weren’t quite so well elevated had watermarks halfway up the side. I remembered that back in late spring there were floods in the area, but wasn’t sure if what I was seeing was caused by that.

I spotted a couple of guys on the side of the river that I simply had to query regarding the homes along the bank. Sure enough, the flood in June of this year took the river level up the bank and even over the levee that ran a hundred feet behind the homes. Some homes were totally destroyed and have been rebuilt. Some homes were damaged, but redone and others were just being lifted higher as the levee behind the homes had been raised, meaning that the flood level would be several feet higher should the river come up as it had earlier this year. To me it meant three things: misery for the homeowners, payouts by the insurance companies and a bonanza for the company that does the concrete pilings. 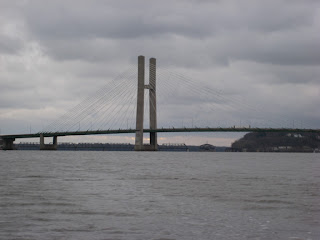 Light snow fell as we pulled into the city of Burlington, IA, home of the famous Burlington Northern railroad; which has kept me up many a night sleeping in such close proximity to the tracks upon which their trains run. Burlington, IA, which was named after the town of the same name in Vermont, was also the first capital of the Ohio Territory. Robert Lucas, a former Governor wanted the capital moved closer to the center of the territory, so the capital was moved to Iowa City in 1841 holding the post for 35 years before the capital was once again moved to the present location in, Des Moines.

Once our kayaks were made land ready Kobie and I had a little argument about how best method to determine the optimal route to the area of town hosting a series of motels. As I have found with many things in life, it was much ado about nothing as it was a matter of miscommunication and hence misunderstanding.

The city of Burlington has a large cliff that overlooks the river, which also meant that we were unable to get onto the road that would take us to the far end of town without going all the way around the cliff. Even after having already walked the side of the cliff for two miles, we tried once more to get on the same road, but again it was elevated. I asked an unkempt man walking past if we would be able to get up on the road, but were told “only if we want to be arrested”. He made an attempt at giving us directions that were sprinkled with various curses. We took his directions with a grain of salt. As we passed under the road we wanted to be on, there was a set of stairs leading up and on the road there was a sidewalk all along it. 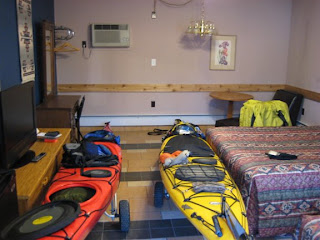 Eventually and after a four mile walk we found a motel with a room that we were able to slide our kayaks right in. We inquired as to the whereabouts of all the usual things we look for in a town, one of which being a supermarket. The proprietor mentioned that he would be going to Wal-Mart and could give us a lift the two miles there.

Wal-Mart on a Saturday afternoon is a sociology experiment gone wrong. The place was so crowded that I could hardly move my cart down the aisles. And that was when there wasn’t someone exercising poor cart etiquette blocking the whole aisle while the trying to determine if they should get the extra large or extra-extra large. I would have to say that I am a typical male when it comes to food shopping. I only do it because I have to and I want to do it as quickly as possible. I have better things to do. I don’t need to admire the new packaging that Bounty paper towels come in; I don’t need to try the sample of cereal that they are passing out. I just want to get in and get out as quickly as possible while fulfilling my shopping needs. I did however stop to talk with a woman who identified both Kobie and I as “the guys walking down the street with the kayaks”. Even in a town of 26,000 we were recognized which I thought that was kind of fun. One of the last things I witnessed was a responsible father tossing something in cart but not giving it enough oomph, striking his several month old child square in the face. Nice work Dad.

Another surprise I had was that gas was selling at $1.87 a gallon. I had also spoken to someone who was looking to refinance their house and that a 15 year fixed mortgage would run them 6%. Lastly I saw the Dow had dropped on Friday putting the average near 8200. These may just seem like three random numbers, but they are all pieces of an economic puzzle. I don’t know how the puzzle is gong to look over the next 12 months, but as soon as I have a chance to figure some things out I will let you know.

I spent the night going through all of the things in my kayak, determining if I still need each and every item. Those that I still required were cleaned and replaced. Those not making the cut were recycled, or put aside to ship at a later date. I also ordered a replacement knife and sleeping bag. The biggest problem was where to take delivery of the sleeping bag. I called a hotel about 100 miles downriver located a short walk from a boat ramp to see if I might be able to ship a package to them without being a guest. Hotel folks are generally very helpful and in this case I got the go ahead. So hopefully in a few days I well have a warm, feather free nights sleep.

Kobie also had his to do list, which included changing his flight out of the US. We weren’t initially sure when this trip would wrap up, but we aren’t going to make Kobies original flight date, so he pushed it back to January 6th. His girlfriend was probably none the bit too pleased, what with missing Christmas, New Years and all.
Posted by Kevin Knieling at 8:22 AM