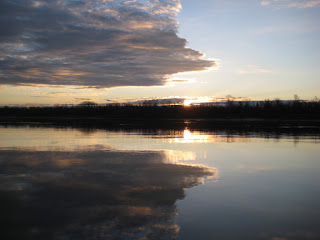 I was quite nice to only have to move the kayaks less than 20 feet to get them back in the water and be on our way. I had some doubts as to how camping on a sandy beach so close to the river would work out, but I have to say it worked quite well. The dogs that were barking were a non-event, there was little in the way of barge traffic and in the morning only one pleasure boat, probably a hunter, came past.

At this time of year, at this location, it is probably light enough to get safely on the water at 6:15ish. While we didn’t quite make that, we did get a jump on the day shortly before seven. Having been a warm night made it far easier to get going than had it been in the 20’s.

We paddled past the town of Chester, IL. Aside from being home to a penitentiary, Chester was also the site of Fort Kaskaskia. The Fort, overlooking the river, was constructed by the French as protection against the British during the French and Indian war. We also paddled under the Chester Bridge. The bridge across the Mississippi linking Illinois and Missouri in the location was completed in 1942. Only two years later though a windstorm caused two of the spans to collapse and it was another two years before the bridge saw traffic again.

I was having fun on the water in the morning paddling along with the assistance of a strong current. The sun and clouds were trading on and off seemingly by the hour, but as it barely made it into the 30’s last night I wasn’t bothered whether the sun was shining or not.

On one section of the river heading due south the wind picked up. The wind was probably only about 10 miles per hour, but it was enough to slow progress as it was blowing north. As the river was nearly a mile wide there was just no place to hide. The islands that existed throughout the river further north were now nowhere to be found. We did the only thing we could, paddle.

Another big factor in our speed is whether we are able to paddle in the main channel used by barges. The current seems to run faster in the channel. As we have zero interest in playing chicken with a 30,000 ton barge though, we yield when barges approach. The water level is quite low and forecast to be dropping so there isn’t as much flow as there would be in spring, but then again there would be far more barge and pleasure boat traffic to contend with. While we are forced to contend with cold temperatures and many services along the river being closed for the season, this is the slowest time of year for river traffic.

By the time we stopped for lunch at noon we were 31.5 miles by river from our starting point that morning. It wasn’t only slightly further than our second longest day by that same time, but bested it by 50%. The distance we covered before lunch was greater than any single full day paddling in the first month and a half of this trip. While Kobie and I are not chicken counting type people, our concerns of making it to the Gulf before Kobie’s flight back home were pacified. 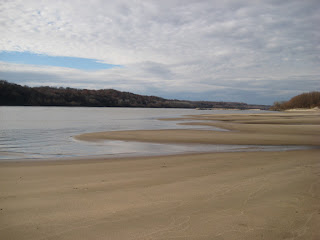 Barge traffic was steady throughout the day, seeing one every half hour or so. With the exception of one barge we saw while sitting on the shore eating lunch, all barges were heading north. I can’t explain why, but it is nice not to have barges sneak up behind us.

We have been seeing very little in the way of wildlife on this part of the river. The streak of seeing a Bald Eagle every day for a month ended in St. Louis and I haven’t seen one since. While I have seen some deer tracks on the side of the river this past week, only today did I see a lone deer running along the riverbank. I don’t mind so much not seeing wildlife as long as it doesn’t suddenly pick up down in Louisiana in the form of alligators and water snakes.

The day seemed to go by in a flash and when we were done we had come 53.4 miles since setting out in the morning. Running short on daylight we had to finish at 4:30. I wonder how far we could have gone in the summer when there is a little more water and significantly more sunlight.

As we pulled up to Trail of Tears State Park it began drizzling. We were excited to have a real place to camp with electricity, a toilet and were hoping to sit outside but that plan was precluded by the rain.

The park in which we camped was named after the event that forcibly removed Native American Indians from their homeland to present day Oklahoma. The process of eviction was started by the signing of the Indian Removal Act of 1830, inked by Andrew Jackson. The act provided funds for the negotiation of removal treaties. Tribal Leaders were coerced to sign the treaties and forced west. While the Removal Act was signed by Jackson, it was MartinVan Buren that carried out the actual relocations. The Act was met with opposition by some parties, including the Christian Missionaries as well as by Tennessee Congressman Davey Crockett. The National Park Service has a good web-site if you are interested in learning more.

It was a day of records for this trip as not only do we have a new record for how far we paddled in one day, but we have a new record of how many barges we have seen being pushed by one tug: 30. He used the conventional 5 x 6 formation. The other record for the day and I wish we weren’t breaking this one, is how close our tents were set up near the train tracks. It wasn’t that we were nearly on top of the tracks, but also a road crossing where the train would be required to unleash its horn. As we hadn’t seen a single train all day on the west side of the river we thought we might be safe, but as soon as we go the tents set up we got a sample of what we would have in store. As we weren’t going to use any of the facilities at the park in the rain, we would have been better off camping on a sandbar across the river. We would have been farther from the train and it would have been free.
Posted by Kevin Knieling at 8:33 PM