Back on the Bald Eagles

We had the wind blow through our campsite overnight, but not to the point of being disturbing. Not nearly as disturbing as a train would have been anyway. It was a mostly cloudy morning with a red sky as the sun came up. As the saying goes, “Red sky in morning sailors warning”. Kobie, being from New Zealand, replaces “sailor” with “shepherd”.

There was a brisk wind blowing across the water, though not as bad as the previous day. We were however periodically sprinkled with drops of rain. 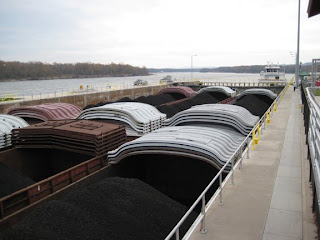 We had only three miles to Lock & Dam #10 to start the day. As we approached the lock, we saw that there were two barges waiting on the south side of the dam looking to lock north. As I was once again the happy owner of a marine radio, I was able to radio the lock and get the bad news that it would be over an hour before we were able to lock thorough. Had we made it to the lock 15 minutes earlier, we could have probably squeezed through. It would turn out that they would be the only two barges we would see the entire day.

I asked about portage around the lock which just confused the person on the other end of the radio. Once I made it clear we were looking for a place to get out and walk around the lock, we were told we could make it around on the east side, which involved walking up a flight of 30 stairs to get out of the water. It was still better than waiting an hour so we opted for that. It also gave us a chance to see a barge going through the lock from a visitor’s perspective. A gate on the land had to be unlocked for us to get back on the south side of the lock without having to walk all the way up to the main road and around, so at least we had that going for us. All this for a six foot drop in the river level.

The person who opened the gate for us also gave us a full newscast in about 30 seconds, which started with Barack Obama winning the election for the presidency of the United States of America and that it was supposed to start snowing on Friday and probably carry through the weekend. I sure hoped he got that one wrong.

The wind seemed to pick up significantly, blowing constantly in the 20 mile per hour range with gusts in the 30’s. On one particular occasion while crossing the main river channel I got a drenching as I wasn’t wearing my waterproof paddle jacket. It was too warm to wear it, but when I got wet it was to cold to have not had it on. I took one of the worst waves of the trip crossing the channel that just blasted me with cold water. I could tell the wave was sizable as when I taking a paddle stroke, my arm was underwater up to my elbow.

The latter part of the morning was a game of Hide and Seek with the wind. We would duck behind islands in an effort to hide from the wind, but eventually it would find us.

We stopped for lunch on a muddy, uninviting section of the riverbank. While I thought we were done with mud way back up on the Red River it was not the case. I was wet, cold and hungry, so it didn’t really seem all that bad. The sun made a concerted effort to shine and warm my spirit if not my body. Better still was that after lunch the wind subsided to some degree, leaving a breeze blowing almost too warmly. 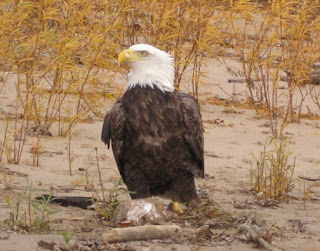 While the string of seeing Bald Eagles on a daily basis had ended yesterday, we were right back into them today. One eagle had caught a fish and was tearing into it right on the bank of the river. I paddled slightly past the eagle and let the wind blow me back around to the beach within 15 feet of the thing. I was somewhat concerned that it was going to claw my eyes out as I was approaching while it was feeding, but fortunately for me, Bald Eagles are not as territorial as say, bears. I have a whole new appreciation for the size of eagles after such a close encounter. The eagle standing on the beach was probably taller than I was sticking out the top of my kayak.

While I was paddling along I came up with an idea that could net a fortune. I would buy up a huge section of land on the cheap right along the river and hence the railroad tracks. I would spend a few million rerouting the railroad behind the large bluff that inhabits the side of large parts of the river and then build luxury homes on the water without the train noise. I had seen several homes that were just lovely and for all intents and purposes were perfect, with that one not so small exception of the trains that constantly ran past.

In the afternoon I wasn’t sure if the wind changed direction, the river changed course or the wind had slowed, but I was enjoying the benefit of whichever reason the wind wasn’t blowing nearly as hard as had earlier in the day.

We ended our day somewhat prematurely as there was nothing in the way of islands on which to camp for the next eight or nine miles which would mean that we would be subject to train horns all the night through. We happened upon a delightful little island, called Rosemont, which was used by campers in the past. The previous campers had cobbled together a picnic table and had cut logs just the right height to use as stools. There was even a fire ring for which Kobie and I were all too prepared. On our last shopping trip we bought some sausages to cook over the fire. While the island was somewhat exposed and a bit windy were we set up camp, the amenities made up for it and then some.
Posted by Kevin Knieling at 10:14 PM