End (or Beginning) of the Red River 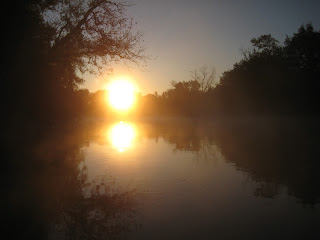 We were up at 5:30 as we were hoping to wrap up our time paddling the Red River by the days end. It was another cold morning hovering somewhere in the upper 30’s. I can handle the 30’s, but when the mercury dips into the 20’s it is going to be significantly harder to get out of the tent in the morning. I am going to need some more cold weather gear for sure.
As we set off in the morning there was a very heavy fog hovering on the water. The sun was playing on the mist in an ethereal way, making for an entertaining morning. I was quite happy that as the sun was shining down it was providing me with some much needed warmth as well. 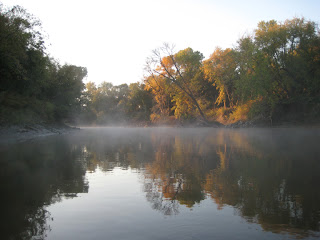 The river was running harder, which was somewhat surprising as there has been no rain down south. I would think that the closer we got to the source of the river, the slower it would run. That being the case, there river was on average about 50 feet wide, much wider than it had been for the last week, but, at times 40 feet of it was no more than a few inches deep.
Having only a small channel in the river caused a significant amount of fast water running through; so much so that there was more hard running water in this one morning than on the entire trip to date. At one point when I was paddling along I glanced over at a large stone peeking out of the water. I took a few paddle strokes and looked again. It was only when I did the triple take that I realized I was gaining absolutely no ground whatsoever. I had to really push along to make any distance through that particular section of water.
The river was not giving up the last 25 miles easily. Even when I was able to get into a rhythm paddling, I would come to a shallow spot and my paddle blade would deflect off some debris just under the surface of the water. Even if it wasn’t deflecting off some object and my boat was able to float through the water, there were times when paddling where I could only to submerge part of my paddle in process of a stroke. In five or six inches of water the paddle has no bite as it is only half submerged.

The most disconcerting moment of the day came when I got stuck in a shallow section. The front of my boat hit a rock under water so my boat started spinning it around. As soon as the current got a hold of the boat, it was quickly pushed sideways, facing lengthwise in the rushing water. Once turned sideways, the back of boat got jammed against a log. I saw it coming all the way, but there was nothing I could do, but go with the flow, literally and figuratively. As I saw exactly what was going to happen I braced myself and slammed into the log, managing to keep myself upright. I was able to free the back of my kayak and drift back down stream to have another go. I chose a different route and found success.

Not that I would have really wanted to portage around another dam, but were there another one, it could have kept the water level up and saved us from dealing with all the shallow sections of river and the fast water associated with it. At first all the riffles and fast water were fun, but they grew old very quickly. There was even one section of fast water where the river rose about six inches. It may sound like much, but with my boat not sitting much higher than that out of the water, it made a good splash running up it.

With only a few miles left to paddle on the Red, the river finally relented, giving us free passage to the outskirts of Wahpeton, ND. While a dam further down river would have helped, there was a dam now before entering Wahpeton. We paddled to the dam and looked for a place to portage on the left of the river as my map indicated we should. We were unable to find anyplace to easily portage and figured it must have been a mistake on the map. We backtracked to get out at a boat ramp on the opposite side of the river, thinking that was the magic spot. The trouble was that there was no place to get back in the river after the dam as it was all private property and fenced off. I am not shy and would have asked permission to put our boats in, but there was a steep drop.

As I was looking for a place to put back in, across the river I saw a half submerged, aging concrete patch about the size of about four picnic tables lined up together. It must have been the portage that my map had been referencing. We were quickly losing daylight and had to make a decision as to whether we should attempt to portage and paddle to the other end of town as planned, or camp for the night.

We decided to go for the portage as we knew that even if we had to paddle the last few miles in the dark, it would be on calm water and we would be ending in a town with a boat ramp and a legitimate campground.

We again paddled up to the dam, this time being wise to where we needed to go. We had to paddle under a few trees leaning across the water and then up to a vertical bank where the concrete patch began. I got out of my kayak and as soon as I stepped on the concrete, a section the size of a man hole cover and about six inches thick broke off, crashing a few feet below with me on top of it. It certainly woke me up, but I was uninjured.

Kobie and I mapped out our portage route, which included trudging through water and lifting our kayaks over four foot boulders that formed a line across the side of the dam. We threw the kayaks on our shoulders and in the fading light, carried the kayaks over the boulders, splashing through water all the way. The last little obstacle was that we had to get back in the water a scant 15 feet on the upriver side of the dam. It wasn’t the Three Gorges Dam, but I still had no interest in going over it.

With the portage complete we paddled the last few miles which seemed like a victory lap of the Red River as we approached Wahpeton, ND / Breckenridge, MN. While finishing our evening paddling the only celestial body in the sky was the planet Jupiter. As we had come to the main road there was a fork in the river with the Otter Tail River leading left and the Bois de Sioux right. We had come to the source of the Red River, 510 miles from our starting point in Winnipeg. When I saw the sign hanging on the bridge for the Bois De Sioux River my heart lifted and I was absolutely fired up. There were two fishermen casting their lines in the dark and as I stepped out of the water, I said to them, without any prior conversation, “We just paddled here from Winnipeg”. The guys fishing was suitably impressed and wished us well on the rest of our journey.

With a major goal accomplished, we got out of the river and I scouted the town to see what was on offer. As there was a Pizza Hut in sight of the boat ramp, we decided we should celebrate by gorging ourselves on pizza. We wheeled our kayaks to the restaurant and pulled them in a parking spot, garnering a few odd stares along the way.

Our appetites sated, we walked the few hundred yards to the campsite, where a sign was posted that a permit was required to camp. As it was well out of office hours in which to obtain a permit, we figure we would chance it. As we found a sheltered area and were just getting ready to settle down a car came tearing into the park, racing around until it came to an abrupt halt just in front of us and then shut off its lights. We waited to see what was going to happen, but the car just stayed there. Rather than confront the driver, we opted to wheel into town and stay at a motel. We just didn’t feel safe in that park. The car may have been some crazy teens at inspiration point, but neither of us had a good feeling about the situation, so off we were.

We had a mile walk to the far end of Wahpeton and the motel. We passed through the main business district and as usual at that hour, one of the few businesses open was the local tavern. After we wheeled past the bar a few patrons come out to see what was going on. Apparently you know you are really drunk when you see two kayaks wheeling down the street.

Not much further up the road we were stopped by the police, which seems to be the norm; the usual, “What are you guys doing?” turns to all manner of questions about our trip. At least we keep the law on our good side.

Arriving at the hotel there appeared to be very few cars in the parking lot, which boded well for us. I walked in to see if the had a room for us and tried to explain what a kayak was. The desk clerk was from India and come to think of it, when I travelled through India I do 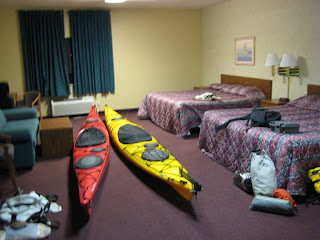 n’t recall seeing a single kayak. The guy had to look out ofthe window and suggested a few options, but bringing them into our room is usually the best for us. That being the case, he had a massive room that was at least 25 feet wide and was going to go unrented for the next few nights. We were able to just barely get our kayaks around the bend and through the door into the room. We got the kayaks in the room and it would be our home for the next few nights.
Posted by Kevin Knieling at 3:22 PM