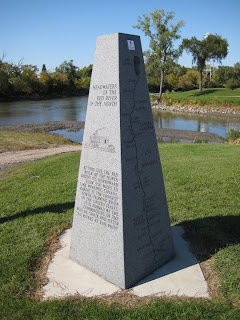 We decided to take another day off as we still had loads to do. I almost miss the days when there was no internet and limited phone connectivity. When you were unavailable, you were unavailable, that was it. The earth still turned, the sun still rose and set, yet we can’t live that way any longer.

I did however have a very positive morning as I received an e-mail back from the Minnesota Department of Natural Resources. They thanked me for the input and were going to have Conservation Officers look into the corrections. It was explained to me that the department doesn’t have the resources to cruise the whole river looking for corrections to their maps, but if they get tips, they can send someone along to check them out.

Better than the news of my efforts documenting changes on the Red River, was that my kayak manufacturer was going to send me a new kayak. I was elated. I wasn’t going to have to battle my kayak around turns any longer. The only problem was that it would take some time to make the kayak and longer still to ship it up to Minnesota. I settled on meeting my new kayak in the town of Mankato, MN, still a few hundred miles and one river away, but at least I knew it would be there. 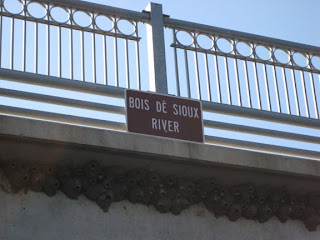 Another thing I was tending to was helping an organization called “Clean up the River”, which among other things, cleans large debris items out of waterways. Kobie and I have been taking photos and GPS coordinates of some items and sending them on so that hopefully they will be removed from the river.

We figured that we should have one last sit down dinner before getting back on the river. It seemed that all we have been eating was camp food or fast food. I was quite happy to go to a nice restaurant and have a real meal complete with vegetables. My mom would be proud.
Posted by Kevin Knieling at 4:02 PM