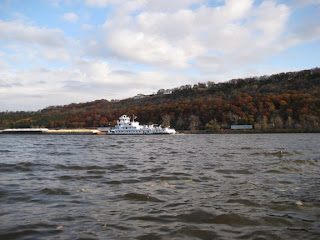 Overnight it was colder than the 32 degrees that was forecast, but it was still warmer than the night previous. From the shelter of our tents we thought it to be a completely overcast morning but as it turned out we misjudged where the sun was going to rise. It was just behind a stand of trees. The lack of sun caused us to mill about in our tents longer than we should have and hence got a later start than was ideal.

Before long we approached the next Lock and Dam. For those of you paying close attention you might surmise that it would be Lock and Dam # 6, but that would be incorrect as you neglected to factor in that the Locks were built by the US Army Corp of Engineers. The next lock was # 5a. As with lock # 5, it was open and waiting for us with the green light welcoming us in. I could get used to this. As we pulled in the lock a sailboat had snuck in from behind. That was perfectly fine with us. We can share.

We were again fighting the all too familiar south wind most of the morning. When just paddling along the wind really wasn’t bad, but it became frustrating when the wind died down and we noticed that it made over a one mile per hour difference in our paddling speed. Our distance over a day would be significantly increased on a percentage basis without the wind.

There was no boat ramp in Winona, so I had to get out over a steep section of rocks near the same sail boat that had joined us in the lock earlier that morning. I began searching for tires near where I got out of the river checking various stores that might have what I needed: hardware shops, car tire stores and the like. After four strikes I thought that was about it until someone suggested a farm supply store near the highway. The problem was that the highway was nearly 4 miles away.

In the last store I began speaking with a retired gent by the name of Jim who works at the store a few hours a week. Jim was going to be going nearby the Farm Supply Store on his way home in 15 minutes and offered me a ride there. I jumped at the offer. While I waited for Jim I began speaking to another fellow in the store who, after hearing about my trip, shared a tale from one of his fishing trips in Canada. In summary, one of the guys on the trip died of a heart attack and had to be put on the roof to keep the bears from eating the corpse. It sounds like the inspiration for the film “Weekend at Bernie’s” to me. 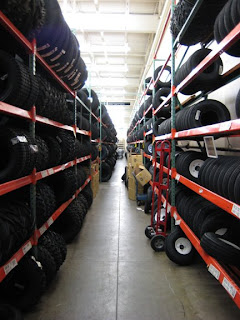 The farm supply had nearly every imaginable tire under the sun, except, of course, the ones I needed. I found a set of tires that would fit the rims of the current wheels and decided that while less than perfect, I would have to settle. I didn’t want to end up like Kobie having to wheel into Fairmount, ND with a flat. I bought the tires and obviously didn’t have the tools to change the tires, so I went to the automotive section and had the pleasure of being charged $10 for the installation and waiting 45 minutes. It gave me a chance to speak with Jim who was kind enough to wait for me before giving me a lift back to the river. I could have probably bought two screwdrivers for a couple of bucks each and changed the tires myself in less time, but at least it was done.

Having had a two hour break from paddling, we once again hit the river. We were quickly on to Lock and Dam # 6 and without a radio had to pull the small boat cord. Apparently the lone worker was out back power washing something or another, forcing Kobie and I to wait for a solid 20 minutes before being sent through.

As we came out of the lock on the south side a boat pulled up to us. It was Jim! He came by to say hello and tell us about a place where we could get a good meal in us before continuing on. We chatted for a couple of minutes and Kobie and I paddled to the nearby Hungry Point.

With only some difficulty we located Hungry Point, a bar/restaurant/bait shop. As it was getting late we would have to be finished paddling for the day if we were going to have a sit down meal. I asked the girls at the bar if there was a place we might be able to set up our tents nearby. There were several potential possibilities, including a cabin for rent up the road, or possibly eve pitching out tents in the 30 feet of lawn sitting between the river and the restaurant, but nothing definitive. While waiting for a couple of calls to be returned regarding our overnight possibilities the girls at the bar said they would be sure to find us an acceptable place to camp or stay one way or another, so we could pull up the kayaks and tuck into a meal. They even told us that we would be able to keep our kayaks in their bait shop garage should need be. 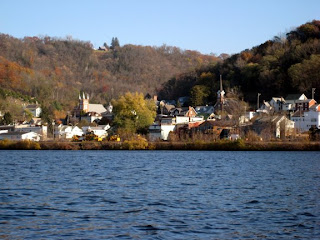 To be done with the searching and begin the relaxing, Kobie and I decided to just pitch our tents out back. Once that was successfully complete, we went into the bar for some food and a couple of beers.

One question that we faced and it wasn’t the first time was, “Are you guys independently wealthy or did you win the lottery?” Kobie seems to get somewhat annoyed at this question. He usually brings up the example that he doesn’t smoke or really drink for that matter. The woman sitting at the bar who posed the question was quite clearly a regular was puffing away and had four drinks while we sat there. For ease of math, let’s assume she spends five bucks a day on cigarettes and $25 a night each of the four times she goes out a week. Between the $35 a week for cigarettes and $100 a week for booze it works out to over seven grand a year, significantly more than we will spend on this trip.

We enjoyed a real dinner and a couple of beers while chatting with a couple of girls that were actually in our age range. It is surprising how few girls we met on this trip of a similar age. I had to call it a night at 8:30 or the bar staff would have had to push me out with the broom at the end of the night. I think I am really missing the social aspect of life having been on the river for so long.
Posted by Kevin Knieling at 8:33 PM