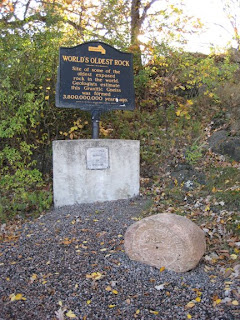 Another nights solid rest is exactly what I needed. The weather had also improved significantly in that there was blue sky overhead. While it was a tad chilly, I had every bit of confidence that the day would warm quickly.

We threw the kayaks out the window and marched on down to the river once again. We put in near the county park and museum. To reinforce the changing landscape, there was a small sign indicating that we were in the presence of some of the oldest exposed rocks on earth, dating back about 3.8 Billion years.

What a difference the weather makes in the outlook for the day. Kobie and I were laughing, joking, singing and were just all around jocular. On days where the weather is poor, there is far less banter between Kobie and me. We didn’t have to think about that today.

It was another short morning paddling before having to get out and portage around a dam. Those few miles though were like therapy for what, if anything was ailing me. I was in such a good mood. All seemed right in the world, or at least in what was going to be my little world. The water again was as smooth as glass and we paddled past Gneiss outcrops. 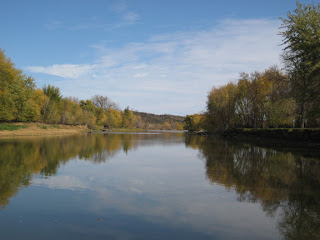 As what seemed to be becoming the norm, the map had the portage listed on the wrong side. We hadn’t realized it until we got our kayaks up the bank, over the guard rail onto the road and walked past the dam, not seeing anyplace to get the kayaks back in the water. We did however see a nice flat concrete section on the other side of the river that would have made life quite easy.

The only option for getting back in the water was on private property, so I knocked on the door of a home that had access to the river. No one was at home, but as I was walking back up to inform Kobie that we have to find another option, a car pulled in the driveway. The homeowner mentioned that the version of map I was using was wrong, as was every iteration before it, so I am guessing it wasn’t the first time someone came knocking on his door. The homeowner also told us that we were lucky as while there is low water now, it was a foot lower still a week ago. I guess I really can’t complain about the rain then.

We made it around the dam by late morning, not having covered much ground. By that point though the day had warmed up to the point where I no longer required a jacket or even shirt for that matte. I also left my spray skirt off as I have taken to do on warm days in shallow rivers. 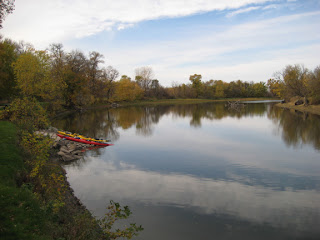 The miles just eroded despite starting as late as we did, having to portage a dam and getting slowed down by a few shallow spots in the river. We had done 12 miles by the time we stopped for a late lunch. We stopped at Upper Sioux State Park to eat and were pleasantly surprised by the amenities. There was an area with picnic tables, garbage cans, a camping area and even a canoe rack to lock up canoes overnight. It was almost too good for us.

After lunch I set my kayak on autopilot and enjoyed the scenery. Earlier in the day there were some geese, a couple of deer, several Bald Eagles and unless it was a fox on steroids, a coyote. A coyote sighting in the wild was a first for me. I have heard them many nights, but had never seen one.

Another change along the river was that we were getting away from deciduous trees. We saw the first evergreens growing off rocks, standing 30 feet above river. 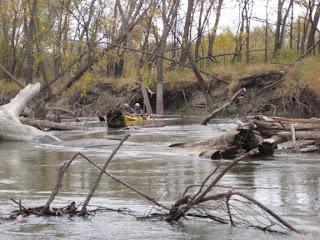 There were several times in the afternoon where I had to switch off the auto pilot and pay attention. There was one section of river that we had been warned about by the DNR that could potentially be entirely clogged with no way though. When we arrived at the spot we recognized it immediately. I went through first attempting to scout a route. I was shoved all over the place with the fast running water that was created funneling though downed trees. On one section I came around a turn and got my back cargo net, which holds down the frame of the kayak cart, caught on a branch. I had no chance of backing up, so I had to go full steam ahead to loosen myself. The consequences were a torn section of netting and a bent hook on one of the corners of the net that pulled loose. It could have been worse.

Even outside of the one major section of clogged river, there were other areas where the river was partially blocked. We had the same fast flowing water to paddle down that we were forced to paddle up on our last day of the Red River. It was somewhat sweet.

Another challenge in the afternoon was a set of rapids that we could hear far before we could see. We were able to see the head of the rapids as there were hundreds of birds, sitting and picking off any small fish that were going over the rapids. It was some cause for concern as 17 foot kayaks are not meant to run rapids. A whitewater kayak is nearly four times shorter than what I was paddling. We looked at the rapids and they were far more significant than anything we had to cross. One wrong move and we would be swimming. I assume it was due to the low water, but there were many exposed rocks with three distinct drops each of about three or four feet. We chose and area to run the rapids, but chose poorly. I got stuck on the first drop and swung sideways. I had to work to get myself down the second drop and finally the third. I had to exert far more energy than I wanted that afternoon. I would rate the rapids as a Class II+. Up until that point we had come across nothing worse than the log flume at Disneyland.

We had many options to camp in the evening. Even if the banks were steep, it was dry and not nearly as muddy as it was up north. We opted to camp in a county park that had a picnic table a privy and little else. It was all we needed to get off the water and into our tents for the night.
Posted by Kevin Knieling at 1:26 PM