Now here is a phrase I hope to never have to use again: “I slept well in the bathroom”. It was a touch chilly on the concrete floor, but it was out of the wind and kept us dry all night. And hey, we didn’t have to go far to use the toilet.

The morning involved a walk past the clogged section of river to a larger dam, where we would again be able to paddle on the Minnesota River. We set off walking down a highway, but wasn’t sure what to expect or if we were even in the right area as Kobie’s GPS had a frustrating habit of mis-locating dams. Occasionally the GPS map will place a dam in the middle of town, nowhere near water of any kind.

As we weren’t sure we were heading the right direction I ran ahead to scout our prospects. As I was getting ready to turn around and make my way back, I noticed a section of the road further up where the blacktop was of a completely different color as the rest of the road. Correctly, I thought it might be a bridge where the water form the dam passed under. When I saw that the section of river was nearly 60 feet wide I knew we found the location the DNR guys were speaking about the previous day.

I ran the two miles, which may not sound like much, but for someone who has spent a majority of the last mnoth and a half sitting in a kayak, it was a workout. At least it kept me warm on a cool morning.

As Kobie and I pulled our kayaks along, the sky above us was divided down the road ala “I Love Lucy”. On the left, where we were headed, was the sun, while to the right dark skies loomed
with periodic flashes of lightning and its partner in crime, thunder. 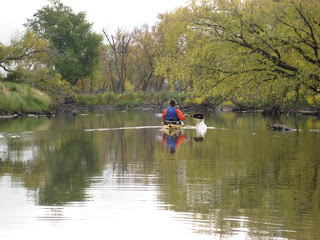 As we got in the water and began paddling, the line of stormy weather advanced over us. The morning proved to be a cat and mouse game with the sun and clouds. The temperature too was inconsistent. As I contemplated what the weather might be, my mind wandered off to the gifts we had received the last few days. Two days ago we received a chicken and then yesterday a case of beer and a dozen sausages. I almost wondered what the gift of the day would be for today.

As we paddled along the river we heard a large number of shotgun blasts quite close to us. It hadn’t occurred to me that it was the opening day of pheasant season. We saw two hunters on the side of the river who gave us that little nugget of information. So as we progressed down river we heard a blast here or a shot there. Fortunately, pheasant don’t occupy rivers. We didn’t however see any pheasant. We did see a large number of Cormorants though. Cormorants generally try to swim away from danger by diving and swimming under water as opposed to flying away. One particular cormorant kept moving forward as we paddled behind it. I pulled out my camera to take a photo when it surfaced, but the bird was so quick to plunge beneath the water again that I would only get a picture of is rear end as it dove under. It happened four times, leaving me with four nearly identical photos of the Cormorants butt.

Other wildlife throughout the day included many turtles sitting on logs. As we would paddle past, they would ungracefully drop from their perch into the river. I also saw a deer swim across a 60 foot wide section of river. I have seen deer swim before, but not for that length.

As we paddled past fixed objects it seemed that at times we were moving at an absurd speed. We finally had the river flowing in our direction, but I am wiser to think that it will be like this every day. As quickly as we were moving, the dam at the north end of Lac Qui Parle was eight miles south of us and it was in our sight for nearly two hours before finally reaching it. It also wasn’t the first time that one of our maps indicated the portage on the wrong side of the dam. It took some clamoring over one foot diameter rocks, but we made it over the dam where we stopped for lunch.

We sat and ate lunch while watching over 20 people try their luck for Walleye on the south side outlet of the dam. While eating a truck with the DNR emblem emblazoned on it pulled up and asked if we were “those kayakers”. He was the guy that our DNR friends from the prior day had spoken to, but his boss was out and unable to issue a permit to paddle on the closed south section of Lac Qui Parle. After a short conversation our friend mentioned that we looked like upstanding chaps, so that it would be OK if we were to paddle through the lake. He cited the fact that the lake was closed for goose migration, but that none of the geese had yet made it there, so there wouldn’t be any harm if we were to take a few hours to quickly skirt through. He also told us about a campsite at the far end, but we still had 15 miles to cover in the short afternoon.

Paddling after lunch on the still open portion of Lac Qui Parle was like paddling on an oversized mill pond. The lake was a sheet of glass, much different than the other lake we had paddled.
The color of the sky was reflected in the water, leaving me unable to tell where the water ended and the sky began. The only exception was where a spit of land hung across, seemingly suspended as the nexus between sea and sky.

As I reflected on the trip I thought that last two days of paddling could well have been the most pleasurable days of the trip, the weather and all the walking withstanding. 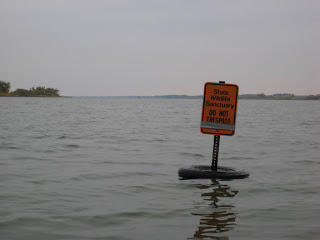 By early afternoon we made it to the section of Lac Qui Parle that was closed. There were nearly a dozen boats in the area fishing just on the boundary. I was waiting for someone to shout at us that we were not permitted in the area, but I had spent the last half hour to come up with the response that we had “24 hour exemption from the regulation”. I really didn’t have much to think about on the water.

As we entered the restricted area it began to rain. The rain grew heavier until it became a torrent. While I didn’t have a pair of paddling gloves, I went back to old faithful: plastic bags. I find them quite useful. While hiking I have used them as a rain jacket, on my bike I have had them over my feet and hands as rain/wind barriers and now I had some ziplock gloves.

I didn’t mind the heavy rain so much; it was only when the thunder and lightning began as we neared the end of Lac Qui Parle that I had become concerned. I immediately went for the coast and hugged the shore as best as I could. It gave me little comfort as the majority of what we were paddling through was wetlands, with nothing growing higher than a couple of feet. I dashed to a section that had some tree cover, leaving Kobie behind as he looked at his map. I on the other hand figured I would look at the map after getting off the open water. I had no interest in being on open water during a lightning storm. I don’t think I have a complete annotated list of things that scare me, but being on open water during a lightning storm makes the cut.

We were winding through the marsh maze at the south end of Lac Qui Parle looking for the campsite that the DNR guy had turned us on to. Kobie spotted what we thought was the campsite as there was what looked to be smoke from someone’s camp fire. It wasn’t smoke from a campfire. As we rounded the bend we realized that the remnants of a tree was ablaze after being struck by lightning. There was nothing but a blacked stump, eight feet high and still on fire casting smoke upwards. Seeing the aftermath rationalized my fear of open water and lightning.

We paddled around in what little light was left in the day, looking for the campground without success. As we turned to head back the direction we had come, we spotted the headlights of a car near the river and figured that had to be it. The area we had to get out was less than ideal, but when I saw a wooden map staked in the ground nearby I realized that we had found a legitimate campground.

Soaking wet from the rain, which had tapered off, we wheeled our kayaks to the main camping area. The campground was absolutely mobbed with hunters. There were 50 of more campsites in use, most with all sorts fancy camping gear that one could only bring when car camping.

Kobie and I grabbed one of the few free spots and set up camp. A ranger drove by saying that he was expecting us. Our DNR friend must have called and told him we would be coming.

After eating and trying to lighten my load of several bottles of beer that were given us by the folks in Odessa, I crawled in my tent to go to sleep. Just as I was getting in my tent the rain picked up again. There was no ladies room for us tonight though. I was just happy to get in my tent as it was warm and dry. I also knew nothing was going to get stolen with all the guns around.

Considering that the past four days was supposed to have been horrible, I had considered us lucky with the weather, getting as little rain as we did. In thinking about it further and considering the lightning storm, I consider us very lucky.

While the gift, or rather gifts of the day weren’t chattel, I was pleased with permission to paddle Lac Qui Parle and not being struck by lightening.
Posted by Kevin Knieling at 11:03 AM