I was much surprised that we weren’t harassed the entire night at our campsite. I did however sleep very poorly. Perhaps I have been getting too used to motels, but I was up at least a dozen times. It was certainly warm enough as I even left my sleeping bag partially unzipped. Wait, I know what it was: planes, trains and automobiles. I was able to tune the noise of the three out for the most part, but the periodic jet blast would wake me. Damn those Asia flights leaving at all hours of the morning.

A few drops of rain fell overnight, but it was dry as Kobie and I were packing up. It was a cool but tolerable morning, allowing us to get an earlier start than we had been for the last few weeks. As we were packing up a barge came down river, giving us the opportunity to scope out the wake left by the boat. The wake didn’t seemed to be all that bad, but I had a feeling, much like surfing when looking at the waves from shore, they seem smaller that when I am actually out there amongst them.

We made quick work of the one and a half miles to the confluence of the Minnesota and Mississippi Rivers. The event was rather, well, uneventful. There were no fireworks, no music, no balloons falling from the sky, there wasn’t so much as a sign indicating that we were now paddling the Mississippi River. The river did however increase in width if not in strength. I still wasn’t the mighty Mississippi that people speak about. I have to admit I was a little disappointed at how little the current increased. I didn’t expect to be whooshed away at ten miles per hour, but some noticeable difference would have been nice. I thought about it a bit and for some reason it escaped me that the Mississippi River was dammed, so in essence we were paddling not on a river as it were, but rather a series of lakes. 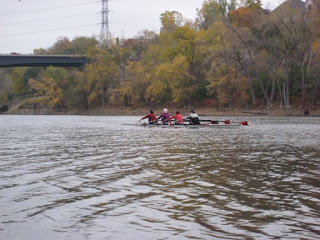 Shortly after reaching the Mississippi River I saw the first other non-motorized craft on the river. Up until that point I hadn’t seen another kayak, a canoe, or even a kid floating down river on an inner tube. The stretch of river that we were paddling was used by the Minnesota Rowing Club. There were a handful of folks out on the river rowing crew. I was impressed by the speed of those boats. If Kobie and I were rowing one of those things, we would have long since been in the Gulf of Mexico, though as soon as a little wave kicked up it would mean a swim.

Kobie and I chatted with a group of girls rowing who probably thought we were a little out of it, but they invited us over to Rowing Club to use their facilities. It was great to have some folks on our level, meaning, there was a low dock for us to exit the water without having to get our feet wet. 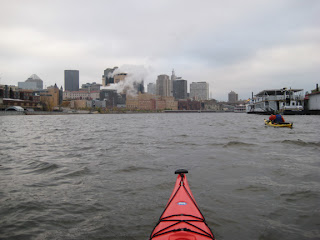 As we left the rowing club we were paddling through St. Paul, MN. We are done with the scenic and wildlife portions of the trip, at least for now. It was a drastic change to environs in which we had been paddling, so it was nice to mix it up, but I wouldn’t want to go for an average Sunday paddle on the Mississippi River in and around St. Paul. The area through which we paddled was very commercial, very industrial, having barges moored all along the side of the river, three or four deep. There were also numerous trains running along the side of the river and smokestacks belching out, yes, you guessed it, smoke.

The wind had picked up an while it was at our back, that would only last until we got out of the city of St. Paul as we would slowly loop back and once again and head south, the first time since Mankato, MN. While the was blowing in our face, I took solace in the fact that we were heading south to warmer climates. Unfortunately though, it wouldn’t be fast enough as one of the girls from the rowing club mentioned that there would be snow flurries tomorrow.

In late morning the sun began peeking out from behind the clouds. As the day progressed the clouds dissipated completely leaving a perfectly blue sky. If the wind stopped it would have been a most pleasant day. While the wind would periodically pause, it seemed only so the wind could gather strength and blow harder still.

We paddled past several marinas, but most boats were encased in shrink-wrap, being stored for the winter. There were only very few recreational boaters on the river and most of those I would suspect were taking their boats for one last spin before winterizing them. To add to the boat traffic was the odd fisherman.


The river was now over a quarter mile wide so there was no jaunting over to the other side of the river. It would involve a commitment not just in paddling, but in looking both ways before crossing the main channel in the river that the barges and tugs use.


After lunch the childs play was over. The wind was kicking up waves in the two to three foot range. There were times where coming over a wave I would bury the first four feet of my kayak underwater only to have the water rush down my deck , jump my deck bag and splash straight in my face, with the remainder ending up in a pool on my spray skirt. This went on for half an hour until we turned and the wind shifted so that the wind ended up at our backs once again. I was able to really surf the kayak. Not like on the Red River, but actually surf the kayak without having to paddle for a good distance. We were really moving along with the help of the current and wind.

Late in the day Kobie and I came to our first lock & dam on the river, Lock and Dam # 2. Lock #1 was further up river , so we started on Lock # 2. I had never been though a lock in a kayak before so despite knowing how a lock works in theory, I was still unsure exactly what to expect. This was the United States though; if it wasn’t inherently safe to paddle a kayak though a lock, it wouldn’t be permitted.

The first problem arose in that the voices on my marine radio were garbled. I had no idea what was going on, but I did know that there is a rope for small craft to pull to alert the lockmaster. As we got closer, the lockmaster came in over the radio and said that they were making the lock ready for us. It takes a little while to fill the lock with several million gallons of water, generally about seven minutes depending on the size and depth of the lock.

One of the advantages of paddling the Mississippi this time of year is that there is very little boat traffic using the locks. That works out well as the priority for craft locking though is as follows: 1) Vessels owned by the US Government, 2) Passenger Vessels, 3) Commercial Vessels, 4) Rafts, 5) Pleasure Craft.

Each lock has a differing amount of lift, but lock # 2 lowered us the 12 feet gently until the far doors opened and we paddled on out on the open river. It was like letting the water out of a bathtub. There was even an audience watching on the far side. They probably got a good laugh seeing two kayaks come paddling out of the massive lock. The lock size itself was 110 feet by 600 feet, enough to fit nearly 2,000 kayaks

The folks working at the lock explained that there was a lull in the river traffic, but would pick up a bit and virtually end on the upper Mississippi at the end of November. It just seemed like a lot of effort moving millions of gallons of water so that two kayaks could paddle on, but I figure we are worth it. Actually, what I did figure was that some of my tax dollars go to maintaining the locks, so I am just reaping the benefits of my tax money being spent. There are so many other things the government spends our money on that we will never be able to use, so at least I was getting my tax dollars out of this one.

Within a few miles after coming out of the lock we were ready to call it a day. We found a nice isolated campsite with one small detractor: there was a house across the river with a bunch of guys all standing around watching us. The chances were small that they would drive around and hassle us, but perhaps the land belonged to a friend of theirs. The area was unmarked and there was nary a “No Trespassing” sign to be seen, but we just weren’t feeling it. While it was nearing dark, we got back in the kayaks and paddled on.

We only needed to paddle another mile down river to the Gores Wildlife Management Area on Prescott Island. We figured being on an island would significantly reduce the changes of anyone hassling us.

Posted by Kevin Knieling at 8:27 PM