On the Minnesota River 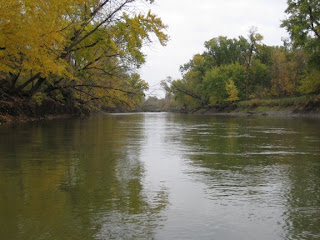 After a cold day paddling in the rain yesterday, it was quite nice to have a very warm night. At some point in the middle of the night I had to open up my sleeping bag to cool off. Other than some drunken hunters laughing and carrying on at 3 AM, I slept quite well. It had rained on and off throughout the night and was raining as we were packing up, but it was still tolerable

We got back on the river in slightly improved conditions and were able to take a shortcut to get back on the Minnesota River proper. Neither Kobie nor I had the route on our maps, but on the wooden placard at the campsite, it clearly showed the shortest way back on the river.

It was somewhat frustrating that shortly after getting back on the river we had to get out and portage around another dam, dealing with more rocks. Much like the last dam there were over a dozen people fishing by the water outlet on the south side. If I am ever reincarnated as a fish at least I know where to hang out…or not for that matter. Well, at least I know not to eat any plastic worms.

As we paddled downriver we came across hundreds of carp. There were schools of 50 fish or more with their orange lips suckling the surface, feeding. The carp must not have many enemies as the fish were sizable and abundant. The carp had a method of jumping from the water similar to that of a spy hopping whale. They didn’t thrash as do most fish when breaking the surface of the water, but they came straight out and slipped straight back in. While these carp are of a different genus that the goldfish you might have in a bowl, they are both from the same family, Cyprinidae. There was some other aquatic activity, mostly by turtles, but the acrobatics of the carp was the clear winner.

Terrestrial animals were virtually nonexistent throughout the day, with the list comprised of a lone brown squirrel and if film Caddy Shack has taught me anything about animal identification, a gopher.

Avian creatures were by far the most abundant along the river. There were so many varied birds, that I wished I knew far more about ornithology than I do. On one section of the river, there looked to be a murder of several hundred crows taking up real estate in several trees that were clumped together. Some of the other things I was able to identify were: Robin, Crow, Woodpecker, Wood Duck, Mallard Duck, Cormorant, Red Tail Hawk and Bald Eagle. Not exactly ground breaking, I know, but it made for a pleasant day. I also posted a short video of some of the day’s activity.

Hawks and Eagles were also on offer. I spent some of the day contemplating the difference between hawks and eagles and while I don’t believe there to be a taxonomic distinction between hawks & eagles, I would say though that eagles are generally larger than hawks, but I am certain that is not an absolute.

We had he wind in our face most of the morning, but with the river running as well as it was, I didn’t mind. At times we were moving at over five miles per hour, double our speed when leaving Winnipeg. We also hit another section of Class I rapids, but I was so engrossed in looking at the changing colors of the leaves I hardly noticed it. I was thinking how much more scenic the Minnesota River was in comparison to the Red River. It wasn’t so much the fall colors, but rather the changing scenery. On the Red River we had several weeks of nothing but brown mud & water along with green brambles.

From a geologic perspective we were in a much different area than we were further up north, while still at or near the edge of the former Lake Agassiz, a huge glacial lake that covered much of the north/central area of North America some 13,000 years ago. We now paddled past giant boulders, probably weighting several tons. At one point on the river a cliff rose over a hundred feet high.

As we were stopping for lunch it began to rain. The rain was rather light so we sat on a boat ramp, eating our sandwiches getting wet. At least as we sat there the wind had dropped. As we set off paddling again the rain subsided while the wind stood pat.

We made great time paddling in the afternoon. The wind had dropped significantly and we had the current running with us quite well. Not only that, but we had the town of Granite Falls, MN in our sights.

After having paddled over several rapids that were a non-event, I didn’t take one section of rapids seriously and got stuck in the rocks. My kayak was just frozen there, diverting the water around my boat. It took some serious effort to free myself and then navigate around the remaining exposed rock to get back in the open water.

As we approached the dam at Granite Falls, we spotted a canoe access sign. Wow, they were even telling us where we could get in and out of the water. I was impressed and hoped there would be more of this along the Minnesota River.

There was a motel not far into town, so we wheeled in. There was an extremely helpful woman working at the front desk as she did everything she could to try and find us a place to store our kayaks or a room in which they would fit. After having exhausted all other options, she remarked that there was one room blocked off as the window screen had been torn off. That was all we needed to hear to try and slide them in through the window. It was time consuming, but we were able to slide the kayaks in through the window. It was all we needed to have a police car pull up with two guys wearing mostly black, seeing us with a kayak half way in the window. It didn’t happen though.