On the Bois de Sioux! 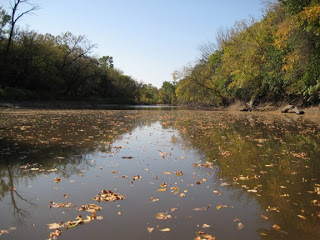 We slept in until nine, more than three hours past our usual alarm on days when we are paddling. Not only that, but we had our kayaks in a motel room a mile from the river. We shoveled in some breakfast and went through the exercise of extricating our kayaks from the motel room, going down the hall and outside. It took us some time to then pack the kayaks, set them on the wheels, and start rolling down towards the river.

I made a quick stop at the post office to mail off a few letters to Canada from whence we came. I got excited when the postal clerk stamped them “airmail” as it was reinforcing that we had paddled enough distance that it would warrant travel between our starting locale and where we where currently, by plane.

We made one last stop in town, which was to grab a couple of sandwiches for lunch. We decided to grab a solid lunch from town before going back to camp food. We finally got on the river at 12:15, only about five and a half hours after our normal start time in the morning.

Despite our late start I felt good about being on the river. A large part of that feeling was due to there being a significant flow of water leading from the Red River to our new river, the Bios de Sioux. I thought it was promising.

The wildlife started right up after leaving town with jumping fish leading the way. There were also a large number of turtles, which we really hadn’t seen much of on the Red River. 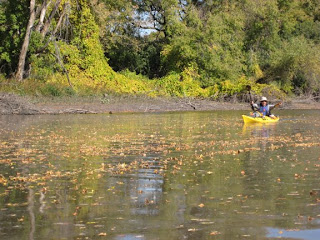 One of the nicest things about paddling was that there was effectively no current on the river. Patches of leaves would gather on still surface, proving that to be the case. With an easy paddle stroke and going into the wind we paddled at a hair over three Miles per Hour. The wind was also a non-event for the most part as there were many twists and turns in the river, giving us a place to escape.

As I paddled around one particular bend I noticed a large number of ducks. As I looked closer though, I realized that the ducks were really decoys used by hunters. I picked up the pace to try to minimize the amount of time I spent in the area. I didn’t think Kobie realized what was going on, so I yelled for him to get paddling. A hunter should always know his target and what is beyond, but I wasn’t taking the chance that Elmer Fudd was in the duck blind having already downed a 12 pack.

Late in the morning I decided to paddle without my shirt. It probably wasn’t warm enough to paddle bare-chested (wearing my PFD of course), but I never know when the last day will be that I will be able to paddle unencumbered by upper body clothing.

The Bois de Sioux River started out at about 50 feet wide leaving Wahpeton, ND, but steadily narrowed as the day wore on. After having paddled nearly 15 miles there seemed to be significantly less water than when we began paddling earlier in the day. We eventually hit a section of river where the depth was only three to four inches. With a draft on the kayaks of about five inches, well, you do the math. It was not like we could begin jettisoning gear to make the boats lighter either. Everything was indispensible and aside from that, there would have been no place to dispose of it.

Fortunately, along with my laptop I had a pair of my five millimeter neoprene surf booties shipped to me. They were exactly what I needed to walk through several inches of frigid water. The problem was that the water level was inconsistent. It would go from three inches to a foot & a half and back to 3 inches all within 30 feet.

The afternoon proved to be an exercise in getting in and out of our kayaks. I found the first several times entertaining as it was adding a new element to the trip, but as the water was cold it grew old quite quickly. Were the water any colder I wouldn’t have wanted to get out of my kayak at all. 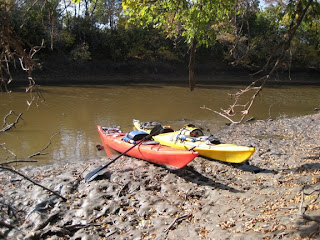 There was rain in the forecast for the next few days, so I was hoping that the river level would rise but I knew that would be a long shot. The Bois de Sioux is a little over 40 miles long, and we covered about 15 miles, so it would leave us with some significant walking were the river level to stay as it was. On the Red River the water fluctuations could easily be over a foot per night, but with the Bois de Sioux I had no idea. Being that it was less than one tenth of the length of the Red, again, I didn’t have much hope.

There was little in the way of trees along the banks, or for us, shelter. In the event of a storm during the night, which we were expecting, we would have been relatively exposed. We paddled/walked for another half mile and were able to find a nice little campsite that provided us all the shelter we could hope for.
Posted by Kevin Knieling at 4:09 PM