Off the Bois de Sioux! 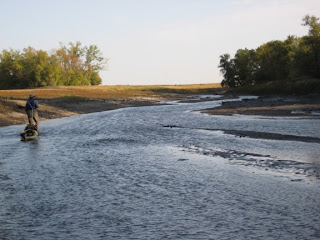 As soon as we got on the river in the morning a single bolt of lightning lashed down, perfectly accompanied by a clap of thunder. It was a harbinger for our day paddling…or not paddling for that matter.

In the chilly morning rain we managed to paddle a mile before having to again start the game of getting in and out of the kayaks to make progress. My initial plan were it the case that there wasn’t enough water to paddle, was to simply walk the riverbed until reaching the next river. I was happy to continue on initially, but Kobie seemed significantly less interested in the idea. It wasn’t until my feet started getting a bit chilly in my neoprene booties that I realized what Kobie’s feet must feel like wearing a pair of sneakers.

I was ahead and stopped at an area where a road came near each side of the river. When Kobie caught up he mentioned something about this being ridiculous. I tried to add some levity to the situation and said, “This is how the explorers would have done it”. While I know Kobie quite well, I didn’t realize that his sense of humor was quite limited when he is cold and wet. I guess I wouldn’t be that thrilled either.

While I was disappointed that we would have to take to the road, there really was no other option. Kobie’s toes were a light shade of blue and I wasn’t having much fun either. We had initially hoped to make quick work of the Bois de Sioux, perhaps finishing it in a day and a half, but it wasn’t going to be the case. 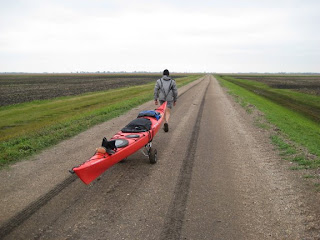 We managed to get up on a farm road and tow our kayaks behind us. It took a little time to get comfortable towing the kayak behind me using my new harness, but other than my spine aching disapprovingly, it worked quite well. The most disheartening thing about walking along farmlands is that I could see forever along the road. It made progress seem agonizingly slow. I saw some farm machinery in the distance and it seemed like I made absolutely no progress at all. But like with any other goal, you have to break down the larger goal into its component parts. We learned that the farm plots were divided in one mile by one mile parcels, which made calculating distance easy enough, but again proved that our pace was painfully slow. 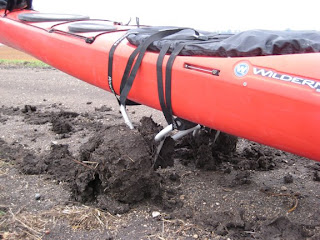 We walked several miles south without much difficulty until we were brought to a halt by our old friend, mud. As we rolled our kayaks along, mud would gather on the wheels to the point where they would cease turning and I would slide the kayak along in the mud. I had to stop every 50 feet to scrape the mud off the wheels only to have them again be fully coated in one revolution. It took us and hour and a half to cover one measly mile. We would have made better time on the river and I would have really preferred to be there, except that I probably would have lost a couple of toes to frostbite. We would have made better time though. I thought I was being clever when I walked along the grassy slope on the side of the road, but after my kayak rolled over on two separate occasions I ruled that out as an option.

We were able to turn west and onto a road that was far more gravelly. Now of course that wasn’t going to make our lives any easier as Kobie noticed that his tire was delaminating and the tube was bubbling through a hole in the tire. There was really no way to patch the tire inasmuch as we didn’t have a pump. We had a spare tube, but no spare tire or pump. Nice work guys.

It didn’t take long for the tube catch a sharp stone and go flat, but again we were pretty much out of options other than to walk on into a small town by the name of Fairmount, ND. We didn’t have much hope of anything being open on a Sunday evening, but we would camp and try in the morning. We deliberated as to weather we should stack Kobie’s kayak atop mine, but we didn’t want to run in to the problem of the cart frame being bent or snap under the weight of two kayaks, which each weigh about 125 pounds partially laden. We could replace a wheel much easier than a kayak cart.

As we got near town we had four trucks pass us, not one of them the least bit interested in why two people where wheeling kayaks along the road in the rain. As Kobie and I made it to the town park, “Pinky” pulled up to inquire as to what was up. After explaining our story, he offered to 1) drive me to the river to check if it was possible to get back on (it wasn’t), 2) drive me to the only store in town that was open and had tires (didn’t have anything we could have used), 3) drive to his house to look through a bucket of spare lawnmower wheels (two had possibilities), 4) drive to a pipe fitter to get a bushing made (done), and 5) drive back to the store and check one more time if they had any usable parts (still no). Pinky was an enormous help and there is no possible way we could thank him enough, but thanks.

As I was being chauffeured around town, another gentleman, Jack, stopped to talk to Kobie as he watched our gear. Being a small town, Pinky and Jack knew one another and worked together, drilling out one of the spare wheels, but the bushing was then on the short side. So off they went again to have another bushing made. The wheel wasn’t a work of art, but the thing rolled. The real question was if it would get us the next 18 miles to where there was dam and presumably enough water in which to paddle. Jack and Pinky were just over the top kind, Jack even driving me to the store for a third time to pick up some microwave cheeseburgers for dinner as we really didn’t feel like cooking.

Kobie and I settled in our tents on the corner of the town park, providing some folks not in the know with something to gawk at. I have no doubt that by tomorrow word will have spread throughout town. Rain fell as we were getting settled in our tents. It wasn’t long before Kobie posed the question, “Did that sound like a car pulling up”. It was and it was Jack offering the use of his machine shop for the night as a place for us to sleep. Jack said that there was a storm rolling in overnight that was going to bring an inch or two of rain. When a farmer tells me the weather I listen as if E.F. Hutton were speaking. I have never gotten bad weather information from a farmer, ever. Before we even got our tents packed up and made our way over to Jack’s the rain came down harder.

Kobie and I had been struggling with the decision as to whether we should hitch a ride to Wahpeton in the morning to get his tires replaced or just use our hard spare and chance it. As we arrived at Jack’s place, which was right around the corner from where we intended to camp, Jack said he would give us a ride to Wahpeton in the morning so we could pick up new tires. Decision made.

In chatting with Jack, he mentioned that while we would get a fair bit of rain overnight, we would need at least four inches, if any were to run off into the Bois de Sioux. Not to stick it to us, but in a “you should have been here yesterday” kind of way, Jack told us that had we been through two weeks prior the river was two feet from overflowing the banks. 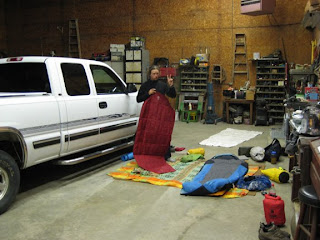 Jack showed us our accommodations for the night and we would have to share the shop with a truck, a boat and an ATV, but I figured they wouldn’t make much noise overnight. Kobie and I spread out our sleep gear on the concrete floor and hung our wet tents to dry. From what was a miserable day, we had a pleasant evening, complete with electricity and heat.

A big thanks to everyone in Fairmount, ND especially Pinky and Jack.
Posted by Kevin Knieling at 4:39 PM