Not So Random Act of Kindness 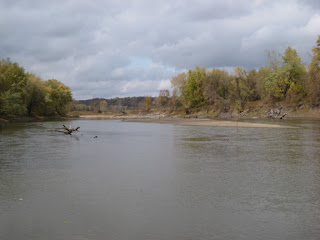 I woke to a very unwelcome rain. The weather was to be sterling for the next few days, so it was somewhat deflating to look out the window and watch the raindrops make rings in puddles. Being out in the rain when it is 45 degrees is generally unpleasant, not least of which when we have to paddle in it all day.

Before doing anything else I called the shipping company that was transporting my kayak to see if they could hold my kayak at the depot in Owatonna, MN. Owatonna is about 50 miles from Mankato, MN where we would be paddling through, so the plan was to rent a truck and pick it up at the depot as it was only going to be carried around in the back of a truck for several days before actually being delivered to Mankato.

I got someone on the phone immediately and the woman first said, “no problem”, but then reneged and said that the kayak would be delivered to Mankato within a few hours. I was somewhat skeptical and asked the question in several different ways that my kayak would actually be delivered to Mankato that day, to the point where she probably thought I was neurotic. While the whole process seemed much ado about nothing, I still wasn’t going to believe the kayak had arrived until I was able to see it with my own eyes.

We checked out of the motel and the proprietor wished us well. He seemed quite happy for us, doing what we were doing. He found it amusing that I had been right next to his home town in southern India as well as to the town in which his sister lives in Sri Lanka.

Kobie and I set off from the motel with kayaks in tow in a steady rain. It was one of those rains that didn’t seem as if it would quit anytime soon. We had about 35 miles to cover to get to Mankato, but we also had a few oxbows that had been cut off to subtract from that distance. While looking at the map I also noticed that there were absolutely no boat ramps anywhere near the area in Mankato where we would need off get off the river. We would figure it out though, we didn’t have a choice.

When we got on the river it seemed, as if it were possible, that the river was actually flowing slower than before it had started raining. I took solace in knowing that there were several oxbows that had been cut from the river which would make our trip a couple of miles shorter than what the map showed.

OK people, I have a rant. What’s up with putting your old recliner alongside the river? The banks will erode and it will fall in or some mischievous kids will toss it in. Aside from that, do you want to sit in it when it is wet? Why do you put so many chairs on the side of the river? Stand or take a foldable chair with you. OK, rant over. I just don’t see why people do that.

Several days ago I had paddled past Gneiss outcrops and as I paddled along today I thought I noticed another type of metamorphic rock, Schist. So from several days ago, geologically speaking, things went from being totally Gneiss, to complete Schist. I know, enough with the Geology jokes, but what kid didn’t giggle in Earth Science when learning about Schist.

The rain tapered by noon and a hint of blue sky was even visible. When we stopped to have a late lunch, it wasn’t raining, but it got much colder. 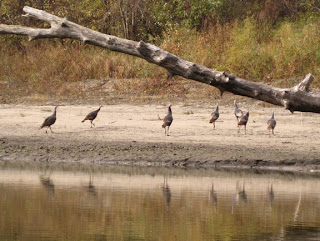 There was a fair bit of wildlife throughout the day. While it was the first day that I hadn’t seen a single deer, I did spot several rafter of turkey and a couple of Bald Eagles.

As we neared Mankato there were numerous people loitering around the river, mostly fishing. One group of people enjoying their Friday evening after work was doing a bit of rock climbing on the cliffs alongside of the river.

While getting into Mankato proper, we were caught between large flood walls on either side of the river. While we thought this was going a big problem, or at least one that would cause us to have to paddle or walk longer than expected, we were heartened to see a break in the floodwall exactly where we needed to get out of the river. We grounded our kayaks 20 feet from the side of the river forcing us to get out and walk to the bank. The next project was to climb up loose rocks with our kayaks and get up to the level of the city. We have had worse times getting our kayaks out of the river, but it was by no means the easiest. When we got up to the city though, we were standing smack dab in front of a Holiday Inn in downtown Mankato.

As we were standing there I figured I would check to see the availability of the Holiday Inn. And while they did have one overpriced room left for tonight, they were full for tomorrow. We would need at least two nights in collecting my kayak. 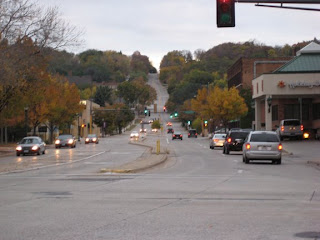 It seemed that the town was full for parents weekend at Mankato State University. While Kobie posed the thought of booking a motel before leaving New Ulm, I dismissed the idea as in all my travels only once, in Calcutta, India, did I run into trouble of not being able to find a place to stay. While I was hoping Kobie’s streak of having trouble finding room at the inn would be broken, it seemed that my string of good fortune would come to an end. Or would it?

After calling a few motels and being denied, I figured that perhaps we should get my kayak sorted out first. I called Scheels, the sports store to which my kayak had been shipped. Much to my surprise, it seemed that everyone at the store I spoke to knew all about it. I figured I would get passed around to a dozen people before finding the one soul who was aware that some guy was going to come in and pickup a kayak. Better still that they knew all about the situation, they had a truck and would be able to pick Kobie and I up down by the river giving us a lift to the store, two miles inland. Not only was the store two miles away, but it was up a large hill. I heard someone say that Mankato is the hilliest city in Minnesota, but to us at that point we had a ride up the hill. Coming down would be the easy part. 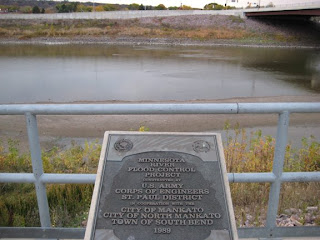 As we waited to be picked up, I also found out that as part of parents weekend there was a big hockey game between the local Mavericks and the Fighting Sioux from Grand Forks. Had I Known, I would have loved to catch the game. Instead, Kobie and I caught a ride to Scheels with Phil. Phil was the one time head honcho of the store, but “retired” so that he now only works 50 hours a week. Phil told us that we would be able to store our kayaks while we got ourselves sorted out. When we arrived, he also made a few calls to try and find Kobie and me a room for the night. I too tried a few other motels while Phil had some business to tend to, but I received nothing but bad news. Between the two of us along with Cory, another friendly chap from the store who also made a few calls and got a list of pretty much all the hotels/motels in the area, our efforts turned out fruitless.

Just when I got the sinking feeling of “what do we do now”, Phil came back and suggested that we stay with him and his wife. He mentioned that they had two kids that recently moved out, so they had plenty of room and wouldn’t mind a little activity in the house. We were taken aback by the offer, but couldn’t be happier to accept.

I had a chance to look at my new kayak and while the keel looked arrow straight, there were some other problems. While the boat would float and probably go in a straight line, so could a modified bathtub. And I wouldn’t pay nearly two grand for the bathtub. The cable that retracts the skeg was drilled several inches in the wrong place, the straps for the seat system were completely twisted and there were pock marks all over the surface of the kayak that would soon fill with dirt and look like black freckles. Were the circumstances even slightly different, I would have declined acceptance of the kayak. I was between a rock and a hard place.

While we had to wait for Phil to finish up, Kobie and I ran out into the shopping mall to which the store was attached and grabbed a late dinner. We were relieved and once again dumbfounded by the kindness of strangers.

Arriving at their home, we had the pleasure of meeting Phil’s wife Margie, who immediately made us feel as we had lived there. We got settled in and chatted, while enjoying a few drinks and some shrimp cocktail Margie put together. As if that wasn’t enough, we adjourned to the outdoor hot tub.

When things seemed most dire they turned around and we ended up in a diametrically opposite situation. When I walked out of New Ulm in the rain the morning I really didn’t think my night would end with shrimp cocktail, a couple of beers and sitting in the hot tub looking up at the stars.
Posted by Kevin Knieling at 10:55 PM