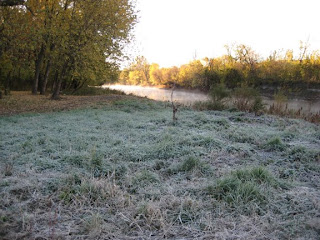 It was such a silent night with the exception of the kids driving around in the parking lot doing donuts, coyotes howling next to the tent, a couple of deer grunting and being woken up at sunrise to gun shots. Other than that it was quiet.

The temperature was in the upper 20’s with the entire ground covered in a heavy frost. It was downright cold. I was a bit chilled in the sleeping bag, but like Kobie, bought a new sleeping bag that we would get when our friend Tom met us in the next few days. I also bought a new tent that I would collect at the same time.

Getting paddling was a rather dismal experience, simply because of the cold. My fingers were cold to the point where I could hardly manipulate them. Some good waterproof gloves would have been nice. 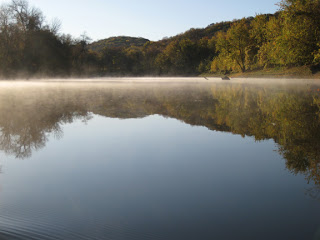 As we set off there was a think blanket of fog on the water, spindling upward becoming ever thinner until they vanished. Except for the temperature, it reminded me of paddling on a witch’s cauldron.

There was something odd about the day that I just couldn’t put my finger on. It took me several hours to realize that there wasn’t a single breath of wind. The water was still, as if we were paddling on a pool. I wasn’t discouraged that the current wasn’t running hard as it had been the last few days, I was just glad it wasn’t running against us.

Later in the morning the current pick up in places. Also making our day shorter was that the river had cut off numerous oxbows that were shown on my map. So instead of circling in big loops, we had to continue straight on several occasions where the river changed course. 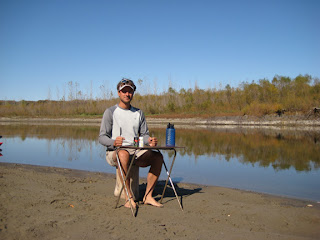 Just about when we were ready to have lunch we happened across a camp of some sort that had a hodgepodge of tables and cut logs to use for chairs. In addition, there was a picnic table misplaced in about a foot of water. We would have eaten there as it was comical, but it would have been a little cold with our feet dangling in the water.

The afternoon warmed nicely. That morning I never would have guessed that I could paddle later in the day wearing nothing but a PFD on my upper body.

Kobie and I paddled next to one another for pretty much the entire day. At one point we saw a group of duck decoys and a poor attempt at a duck blind. One of the main rules of hunting is to know your target and what is beyond and obviously I am not a misanthrope, but I just don’t trust drunk people with guns.

I was feeling better than the day prior, so I enjoyed spotting some wildlife, which included: an egret, beaver, blue heron, numerous deer, and a varied assortment of ducks 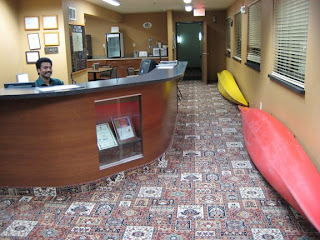 We ended the day in the city of New Ulm, MN sister city to Ulm, in southern Germany. It was a short walk to town and there were numerous motel options. After settling on a motel we went through the game of trying to find a place to store them. After the usual things, such as trying to get them in a room, basement, storage area or outbuilding, the proprietor said we could leave them in the lobby as it would be manned the whole night. It worked for us.

In checking e-mail, I learned that my kayak wouldn’t arrive for another five days to a place we would be tomorrow. I was somewhat deflated, but had to roll with the punches. Kobie and I decided to walk to the downtown area of the city for a good German meal while discussing the options of collecting the kayak.

We considered renting a truck to go collect it where ever it might be, wait until it arrived in Mankato, MN and rent a truck and drive back or to simply spend some time in Minneapolis and try to have it rerouted there. 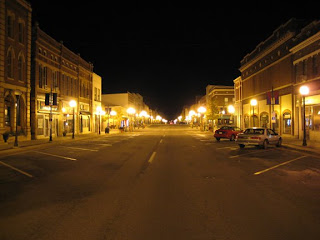 It was a considerable walk, or at least longer than we thought it would be to get to the downtown area. I felt as if I was walking back in time. The downtown area of New Ulm looked much like the Gaslamp district in San Diego. I wasn’t sure if that was intentional or if the intent was to have the area look like something entirely different. The one main difference was that the Gaslamp district was far more vibrant, with far more people around. Other than a couple of drunk women leaving a bar and shouting at Kobie and I, we saw nary a soul.

The Kaiserhoff Restaurant, threw together a good, filling meal, even if it is not exactly how my mom used to make it. We had the walk home to help digest. We also decided that I should call the shipping company in the morning and see if I could have the kayak rerouted to Minneapolis. Hopefully we would come up with something.
Posted by Kevin Knieling at 3:53 PM