End of the Minnesota River 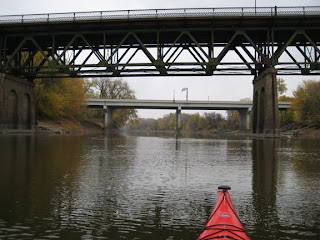 We awoke later than planned, somehow oversleeping the alarm. We crammed down breakfast, checked out and hurried down to the river. While the day outside was unpleasant, the day on Wall Street looked less so. The S&P futures were limit down 6.5% in early electronic trading, meaning that it wasn’t possible to trade at a price lower until they opened up for regular trading at 9:30.

I was looking at the positives in the morning, which were that it was moderately warm and when we started out, wasn’t raining. I also spotted what has become the requisite Bald Eagle within five minutes of setting off paddling.

The sun made a futile attempt at showing itself but the clouds easily quashed that plan. The river didn’t seem to be flowing at all. I was hoping we would get a boost from the running river, but it seemed as if it was going to be all paddle power. I was thinking about our direction of travel and given the conditions we had experienced I would have preferred to travel in the opposite direction, from St. Paul to Winnipeg. It just seemed as if it would have been so much easier.

As we started off, Kobie mentioned that arms felt like lead, to which I replied, “they feel that light?” I was especially tired as I got caught up last night watching a movie. It was one of those things that wasn’t that great, but I was committed so I couldn’t just shut it off.

Thinking about where we needed to go by days end, it wouldn’t be an easy stop at night so close to the Twin Cities. It was obvious that we were encroaching on civilization. We were seeing far more houses and roads alongside the river not to mention seeing more in the way of air traffic. 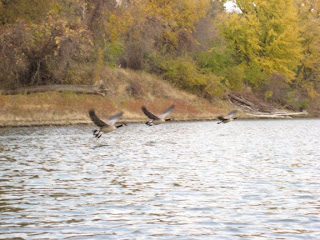 The sun tried several more times to crack through the clouds and eventually found success, but only ever so briefly. Even though it wasn’t the sunniest of days, I managed to strip down to a long sleeve shirt, which was a welcome change from the prior day. As there was little or no wind I was plenty warm.

As we paddled through the Minnesota Valley National Wildlife Refuge and Recreation Area there were large smokestacks visible and a noticeable film on the still areas of the river surface. That’s some Wildlife Refuge. I couldn’t possibly imagine that we would be in the midst of a state park just down river. 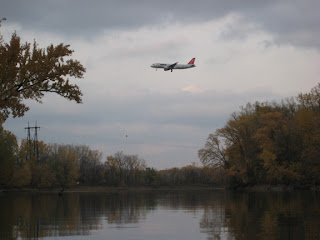 In the afternoon I saw dozens of low flying planes coming and going from Minneapolis / St. Paul Airport. It reminded me much of my bike ride earlier this year on my last day approaching New York City when I rode past Newark Airport. The closer I got to the airport, the lower the planes would be when they passed overhead. In this case I was able to smell jet fuel. It wasn’t quite like the airport in St. Maarten, but the planes got rather close for the continental United States.

Also later in the day, with fewer than 15 miles of the Minnesota remaining, I had to continually look over my shoulder for barges. We were on the navigable portion of the Minnesota and there were some rather large docks to which river barges cold dock. The first barge took me by surprise, but it was the shock of the size more than anything else. Not that the barge was all that large at 200’ x 30’ (OK, it was fairy large), but in comparison to any other river craft we had seen until that point, it was, in short, big. On a positive note, if there were barges of that size on the river, my concerns of shallow water were allayed. The river was over one hundred feet width and increasing. We were no longer big fish in a little pond, but rather the converse. 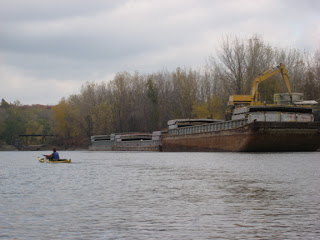 We ended our day in Fort Snelling State Park, which didn’t really allow camping and closed at 10, but we had little choice. We weren’t trying so much to hide, but we didn’t exactly make ourselves conspicuous and hoped we wouldn’t be spotted.

So at the end of the day not only did we get the traffic from the highway bridge above us and the train across the river, but we also under the flight path of many a 747. We did however get to within a mile and a half from the confluence of the Mississippi River.

While the Minnesota River portion of the trip was still 1.5 miles from being complete, I want to review the numbers. Going first back to the Red River, it took us 27 days to paddle 510 miles, or about 19 miles a day. On the Minnesota River we paddled for 11 days, covering about 315 miles, giving us an average of nearly 29 miles a day. A ten mile increase over the Red! I just hoped that the trend would continue when we got on the Mississippi.
Posted by Kevin Knieling at 7:47 PM