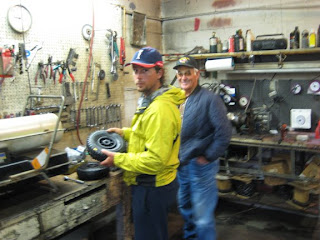 I had a great nights sleep in the machine shed, waking only once and that from Kobie prodding me as I was allegedly snoring. When we got up at seven it was still dark, mostly though from the storm clouds. Jack’s wife, Corinne invited us in and fed us some breakfast before we set off to Wahpeton. It gave us a chance to chat and look at some photos of the family, getting to better know our hosts.

We hopped in Jack’s truck and set off for Wahpeton. The distance that took Kobie and I two hard fought days, took a scant 15 minutes in a car. I just shook my head.

On our voyage south I knew we were beating colder weather as we stayed ahead of the sugar beet harvest. To harvest sugar beets the temperature has to be low enough that the beets can be stockpiled so that they don’t spoil. I now saw piles of sugar beets on the side of the road.

On the drive Jack posed the question, “Which do you prefer, biking or kayaking?” It was a good question and not one I had really though about. If I was going out for the day, I would probably choose the bike, though on a long distance basis though I am not so sure. While I wouldn’t have guessed so initially, I have had far more in depth relationships with people on the kayak trip than I had on any of my bike trips. While biking though I probably meet more people, am more mobile, have quicker changes of scenery, have an easier time getting the bike in a motel and don’t have to worry about cold water…much. So the answer is, I don’t know yet.

We got up to the farm supply store and they were able to sort Kobie right out. The one small issue was that they didn’t have the proper tube, but like so many times before, we made something work. They shop didn’t have a bike pump or rain pants, two things we thought about picking up, but to no avail as we would have to carry on.

When we got back to Fairmount, we spent a few minutes making some plastic bushings for our kayak carts as they were taking a beating from the wheels. And with the mileage we had left to go, they would surely get a workout. Jack offered us a ride to White Rock Dam, where we planned on getting back in the water, but obviously we declined. Corinne did however send us off with a few homemade treats.

As we left town there was a truck filling up with ammonia, which is actually used in fertilizer. When disconnecting the nozzle from the truck there was a large cloud of ammonia that formed and blew right across the road. The ammonia burned my eyes and nearly made me choke. I covered my face in a shirt which helped, but only a bit. If you want to recreate that one, take a whiff of the bottle under ammonia under your sink, it’s a real treat.

Kobie and I walked along the highway, headed south. Within the first hour we had several people stop and ask what we were doing. One of the folks suggested that there might not be enough water in the channel south of White Rock Dam, but we figured we would cross that water, or lack thereof, when we got to it. Two of the people that stopped even offered us a ride the remaining distance to the dam. It was a friendly town. 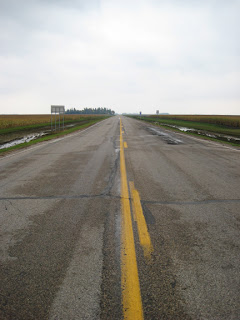 It was interesting just walking along the highway with a kayak in tow. Sure, I had once hiked 61 miles in a single day and that was through the mountains nonetheless, but again, I didn’t have a kayak with me. Also, I wouldn’t have wanted to ride a bicycle on the shoulder of Highway 127, but for pulling a kayak, the road was just fine.

On the walk I had been thinking that having to portage in total nearly 30 miles to White Rock Dam is going to make the five mile portage in Browns Valley seem like a non-event. As I had little else to do as I walked along, I picked up trash from the side of the road. Mostly I collected cans, but there was also a window screen and a few other odd bits. I didn’t touch diapers though.

Early in the afternoon the rain started. The rain was relatively light, so it wasn’t all that bothersome, but had it gotten much heavier it would have become so. As we walked past a farm a gentleman by the name of Wayne invited us in his machine shop to get out of the rain. It was a good respite from the weather. We chatted with Wayne for a bit about our trip. As we talked, Wayne’s father came over and before long we were invited in for lunch. It worked out quite well as we had an enjoyable conversation, got some food in us and missed some of the heavier rain of the day.

While the thought of getting out in a cool rain was less than appealing, we knew we had to do it. We were already running behind schedule, both for the day and for the trip as a whole. Before leaving though, Wayne gave us a bag full of vegetables and pulled a few apples off a tree as we walked past on our way to the road.

We walked on in the rain. Within an hour, much to our surprise, Wayne pulled up next to us in his truck. He had offered us a ride earlier in the day, but said he would give us a ride to a campsite and then pick us up in the morning and drop us off exactly where he had picked us up. We still had quite a bit of daylight, so we pressed on to South Dakota. 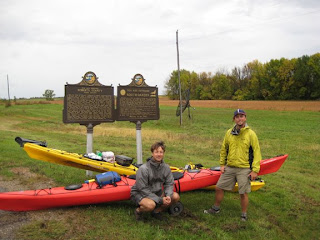 We were right near the border when Wayne came by, so he stuck around to take a few photos for us. I have only been to South Dakota twice, the first time entering on a bicycle and this, the second, oddly enough on foot while pulling a kayak.

We said goodbye to Wayne and continued on our way. We certainly weren’t Bannister and Prefontaine, but we walked at a pace of about three MPH. It was still much better than covering a mile in an hour and a half walking along that muddy road.

As soon as we crossed the border and entered South Dakota the wind immediately and quite curiously, ceased. With that, the mosquitos picked up. Also, the shoulder of the road in South Dakota became wider (though I still wouldn’t want to ride a bike on it) and there was a hill, the likes of which we hadn’t seen.

In an effort to make some time I figured I would see what it was like to jog with the kayak in tow. It actually worked quite well, especially when going down a slight decline. Kobie was less interested in jogging so I waited on a corner for him to catch up. As I stood on the corner a truck pulled up with two kids. They had an accent signifying that they weren’t the normal South Dakota inhabitants. It turned out that they were Hutterites. While different than Amish or Mennonites, they all trace their roots back to the reformation in the 16th century. Another truck pulled up and a few more guys jumped out. While I would usually be somewhat concerned being surrounded by a large group, Hutterites are pacifists. 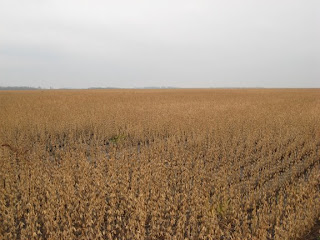 As Kobie rounded the bend, he said that he couldn’t tell what was going on, but it appeared as if I was surrounded. From a distance, Kobie gave me the Scuba diving OK sign which I returned so he knew that all was well. They Hutterites weren’t sure exactly what a kayak was, so I explained it all to them. They seemed amazed that we were kayaking all this way, but had to tend to chores. As we parted ways we exchanged a few words in German and we were off.

A little further down the road I saw a guy riding what looked to be a selkie, being pulled by a horse. The horse was quite far away, but if he were any closer I am sure he would have given us and nod, meaning “you have to pull those bastards too, huh.”.

The sun set as we were still several miles from our goal and we didn’t; have any choice but to carry on. Kobie put a strobe light on the back of his kayak and a red flashing light on the back of his head. I used my headlamp to see where we were going in front so we were covered. Despite having sufficient lighting a few cars still cut us closer than we would have liked. If that was the worst thing that happened to us we would be OK, but fate had one last surprise in store. 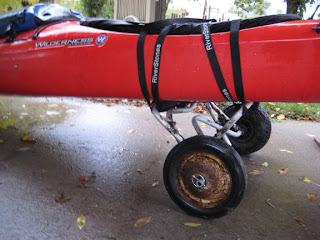 As we walked along there was a large bang. This time I had a tire blowout. Upon inspection there was a thin sliver of metal sticking out of the tire. I was starting to think that the kayak wheels we had purchased weren’t meant to transport a kayak nearly 30 miles. Thankfully, when Kobie replaced his tires, we kept the hard spare that Pinky and Jack had cobbled together. I had to throw that on for the last few miles.

We finally made it to White Rock Dam around 8 PM. White Rock Dam turned out to be a 15 foot high dam, which led me to guess that there would be enough water for us to paddle the following morning. The only hiccough in our plan was that camping wasn’t permitted by the dam, despite having a half a dozen people tell us that there was a campsite there. While we always try to do the right thing, in this instance we pretended to not notice the sign, though we did squeeze into one tent. We thought it might come back to haunt us as later that night there was a visitor at the dam. A car pulled up near us and hung around a few minutes. It is never fun to have late night visitors as tents generally don’t have windows so you can’t see what is going on. The car drove off and other than the sound of coyotes howling, we were left in peace for the night.
Posted by Kevin Knieling at 5:10 PM