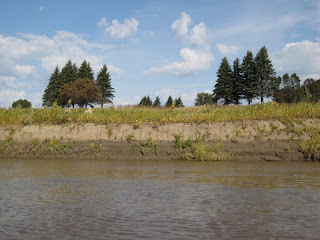 It was difficult to leave the comfort of our motel, but we had an appointment to meet a reporter for the Grand Forks Herald down at the river. That story can be found here. As Kobie and I stood and spoke to the reporter we were blasted by a south wind, meaning it was going to be a tough day of paddling for us.

As we set off I felt fantastic. I was a new man after two days rest. That being said, I knew I would be sore the following morning. I was just happy being back out on the river and it didn't take long to get out of Grand Forks proper.

There was little wildlife throughout the day, with one Bald Eagle being the notable exception.

It was quite apparent that the level of the river had dropped quite significantly. In the morning, by watermarks on the shore we were able to tell that the river had dropped two feet. By the afternoon the drop in the river level was over four feet. Notice the change in the color of the bank in the photo where the water level had dropped. We thought that as we were traveling further south we were getting away from the mud. As it turns out, it was just that it hadn't rained in a bit and the banks of the river were relatively dry.

After lunch the wind picked up further and there really wasn't anyplace to hide, so we just paddled on. With the drop in the river, the flow was not nearly as hard as it had been so at least that offset the force of the wind to some degree. Another point of solace on windy days is that when we get to a campsite, the wind usually keeps the mosquitos away. The hitch in that plan is that in the evening, just as we are making camp the wind usually drops off.

I had a supremely frustrating afternoon of paddling as my kayak was misbehaving. The tendency to pull to the left was really getting to me and to the point where I wanted to douse the thing with kerosene and set it alight. As I had to constantly correct for the kayak I had to paddle on the left side of the boat far more than should be necessary, much to my chagrin. My arm and shoulder muscles are building unevenly and I am starting to look like a fiddler crab.

Kobie even pointed out that at times when I am go against the grain and try to make a right turn I don’t look so much as if I am making a right turn rather than battling it. This just can’t continue; especially not when I just paid a few thousand dollars for an oversized piece of Tupperware.

The evening left us on private property, but true to the rest of the trip, we were given to go ahead to set up near the river. Georgia, the owner of the property mentioned that she had seen the article about us in the paper. Not that anyone has denied us permission to camp on their property, but having been in the paper should give us the benefit of the doubt, were anyone to have any about permitting us to camp on their property.

Shortly after getting the go ahead and setting up down by the river Georgia came down from the house and asked if we wanted to camp up there or even sleep in their pontoon boat in an effort to evade the mosquitos. It was another one of those situations where we were already set up and were just about to climb into our tents for the night, so it would have been more effort than it was worth.
Posted by Kevin Knieling at 9:33 AM