Ill on the Water

The night was chilly, though tolerable. I know that it will only get worse though until we make a concerted push south. Worse than the temperature though, I was feeling quite sick. My stomach was rumbling and I felt as if I was going to vomit. It‘s bad enough being sick in the comfort of you own home in a nice warm bed. Being out on the river with no creature comforts whatsoever is less pleasant still. That’s not to mention being in a kayak adding another level of complexity.

My feet were cold, even while wearing socks in the kayak and having my cockpit cover firmly attached. I was going to need some new things in the way of cold weather gear. 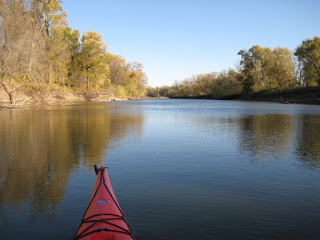 It was a shame I didn’t feel well as it was a beautiful morning and my illness was taking away from appreciating it. The trees were all some shade of yellow, each day losing a few more leaves, soon to be bare, signaling that winter has arrived.

While I welcomed the rising of the sun, when the river is mirror like, the sun reflects off the water into my eyes, not to mention that it shines under the brim of my visor as well.

Despite being ill, I tried not to think about it and paddle along. I did however tell Kobie that if I made a dash to the shore he would know why. I was just happy that the current was running with us fairly well. The current wasn’t constant, but in the spots were the river narrowed we would get a boost in speed. It seemed to only take a ten percent blockage in the river to give a noticeable increase in speed. There were times where we were moving over seven miles per hour.

There were many sandbanks in river forcing us to follow the main channel. We could no longer take the shortest route between bends in the river lest we get hung up on the sand. While following the channel made the trip a little longer, at least the channel was moving well giving us a push.

We paused for lunch after having paddled 20 miles. I managed to choke down a dry sandwich and a handful of pretzels. While Kobie ate I kept occupied by looking at a number shells of on the beach. They looked like clam or spiral shells that you might find at an ocean beach, but only smaller than the size of a fingernail.

I had to take a couple of bathroom breaks in the afternoon and having to climb in and out of my kayak stepping in the water didn’t help in keeping me warm. Paddling at a good pace however, did. It was becoming clear that the cold weather was catching us as there was one area of trees that was nearly completely devoid of leaves, excepting the few hangers on.

Kobie and I had a bit of a discrepancy between our maps about where the next camp was located. My map that showed it farther down river was correct. It allowed us to make full use of the day, covering a hair shy of 40 miles for the day.

We set up camp down a path out of the main park area. Before long we were glad we did as a group of kids came driving in, doing donuts in the parking lot before taking off. Then they returned, not just once, but twice. They had absolutely no idea that we were less than 100 feet away in the woods. We hoped that they had enough after three sessions of maniacal driving in the parking lot, which turned out to be the case. We were able to drift off to sleep.
Posted by Kevin Knieling at 3:43 PM