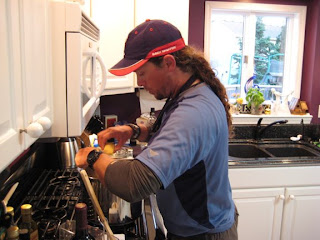 I slept in, which was just awesome to get solid nights sleep in a real bed. Hotels are fine, but there is nothing like sleeping in a home. Kobie and I spent the morning getting acquainted with Margie, our gracious host. Our friends Tom & Steve were going to drive down to say hi and deliver our new gear, so we had planned on again finding a motel for the night. Margie wouldn’t hear of it as there was plenty of space. If I was gobsmacked at their kindness yesterday and now they were even putting our friends up for the night, I didn’t know what to think.

In the morning I called the manufacturer of my kayak, Wilderness Systems or rather their parent company, Confluence Water Sports,. The best I got was something along the lines of, “At least it should go straight. If there is anything else we can do for you let us know”. I was angry. Very angry.

As there was going to be a full house Margie suggested a big dinner; so the three of us made the rounds at the butcher, wine shop and grocery store to pick up supplies. Shopping complete, Kobie and I were set up with a car to drive up to Sheels, where we were going to meet Tom and Steve. We also had the chance to do a little shopping while we were at it. Unfortunately though, what I was looking for, namely neoprene socks and paddling gloves were not on offer.

Also while at the store I transferred my gear to my new kayak, trying to not let on that I was seething. As I was doing so while the four of us were chatting I mentioned my interest in gloves. A woman in the back where our kayaks were stored was just marking down a huge bin of gloves to the low, low price of one dollar. While none were really paddling gloves, I did end up walking out of the store with a half dozen other pairs of gloves. For that price I could ship them home and still be ahead of the game.

Back at Phil and Margie’s the cooking began, including Kobie preparing his signature carbonara. The six of us ate drank and were merry. Everything was delicious and it will certainly be one of the more memorable meals that I will have had on this trip for sure. Similar to the night previous, things wound down in the hot tub.
Posted by Kevin Knieling at 11:13 PM