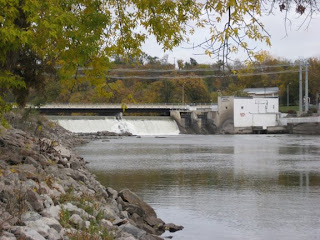 We took the day off in Granite Falls, MN to rest, recharge, clean our gear, resupply, do laundry and update our websites. I did however spend part of the morning looking at tents and sleeping bags in that the weather would start getting decidedly colder.

For lunch we went to Jimmy’s Pizza in downtown Granite Falls. The pizza was quite good and it had a bakery right next door, so how could we go wrong? We ambled around town and checked out the few shops in town before hitting the walking path along the river, stopping at the dam. The dam was by far the largest of all the dams we had crossed, this one coming in at probably 20 feet high.

The afternoon was chilly, just reinforcing that I would need another sleeping bag. It was certainly autumn. The leaves were changing, people were decorating for Halloween and I could smell the wonderful scent of a fire drifting from someone’s chimney.

Later, I the afternoon I tried to play catch up on Wall Street. The Dow Jones was up over 900 points, nearly double its biggest one day point gain ever. While some people said that it is a good time for me to be away from finance in this turmoil, I disagree. I miss it and think this to be one of the best times to be involved. The volatility of the market has increased significantly, changing the rules of engagement. Any change, good, bad, or indifferent offers the opportunity to make money.

I had such big plans for the day, but ran out of time so ended up ordering another pizza for dinner. My biggest disappointment though was that I didn’t have time for a massage. I had seen a sign advertisement for a local massage therapist, but it wasn’t meant to be. I had to settle for a hot shower before turning in.
Posted by Kevin Knieling at 1:10 PM