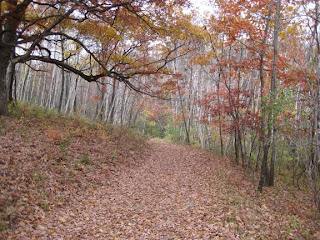 I slept soundly through the night and didn’t even hear Jamie and Jane leave for work in the morning. While it wasn’t raining when I glanced out the window it did still appear windy. The wind didn’t seem even remotely as bad as the day previous, but it still wouldn’t have been much fun to be back out on Lake Pepin. In truth, I think Kobie and I had already written off the day before it had even started. All the talk of how bad the weather was supposed to be left us mentally unprepared to paddle.

We had little in store for the day as it was an unanticipated day off. I caught up on current events, including the Presidential race and what was happening on Wall Street. I also did a bit of writing while sitting in the guestroom/study. Jamie had a collection of literature to die for: Kierkegaard, Ibsen, Dostoevsky, Dante, Dickens, Melville. I could go on ad infinitum. Were I forced to spend in eternity in one room, it is quite possibly the room I would choose. There would be absolutely no shortage of quality literature to keep me occupied. 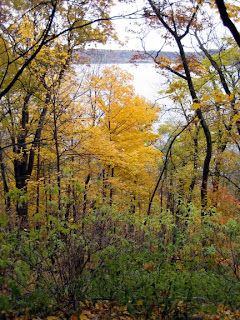 In the afternoon Kobie and I went for a walk in Frontenac State Park. It seems that we timed it nearly perfectly to catch the leaves changing color. It reminded me of so many autumns as a child, watching the leaves turn and then fall to the ground, being then forced to spend a Saturday raking them.

The park offered a vista over where Kobie and I had paddled the day prior. The park also overlooked the historic town of Old Frontenac. Frontenac was originally settled and developed by two brothers, Israel and Lewis Garrard, who were taken by the beauty of the tall bluffs and prairies that surrounded Lake Pepin. The old town of Frontenac dates back to 1839 and still has nothing in the way of street lights and little in the way of paved roads. There is nary a retail business in the town and in addition, and I like this one, the railroad was routed around the town. Frontenac is a quaint little town steeped in history and is on the National Register of Historic Places.

Lake Pepin itself was named after Pepin the Short, King of the Franks. A more familiar name relating to the Franks is the son of Pepin, Charlemagne, who succeeded Pepin as king. Charlemagne became the ruler of Western Europe, developing roads, a monetary system and defined rules relating to the feudal system, not to mention encouraging learning and
development. 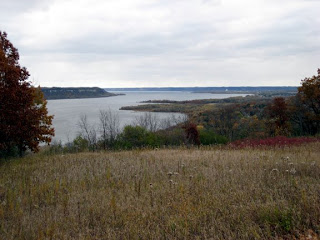 As we walked along there was a sign describing the fateful events of July 13, 1890 when the excursion steamer Sea Wing capsized in 60 mile per hour winds. Hmm, that sounds familiar. In 1890, 98 people lost their lives and made me reflect back on the sign I saw yesterday, “Everybody has a good time on Lake Pepin”. I couldn’t be the only one who disagreed with that quote.

When we returned from our walk, Jamie was back from teaching so we ran into Lake City to do a bit of shopping, both for out trip as well as for dinner. Kobie was at bat again in the kitchen. Jane made it home earlier than expected so it gave us all the opportunity to chat while preparing dinner. My specialty in the kitchen is staying out of the way as I am of no use whatsoever. When I moved into my apartment in New York City the kitchen was brand new. When I moved out six years later, the kitchen was brand new. I never even took the papers out of the oven. Most people have to clean their kitchens, I had to dust mine. That pretty much sums up my cooking experience. 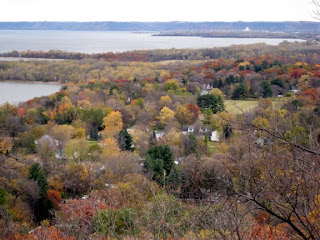 We had a fantastic dinner and some great conversation concerning nearly ever discernable interesting thing. I certainly enjoy meeting people from all walks of life, but it isn’t necessarily commonplace that conversation flows as well as it did. Many times in my travels the conversation relates to concrete things, such where I have been, but it is so nice to delve into the abstract. One of my biggest complaints of being away from “work” is the lack of mental challenge, so a spirited conversation goes a long way to keep my mind from collecting cobwebs.

After dinner we had another visit from our friend Tom. He first met us in Mankato, MN with some camp gear and here he was again. Tom is like Santa Claus; every time I see him he comes bearing gifts. For Kobie it was another new sleeping bag as his last one didn’t quite cut it and for me some neoprene paddling gloves and socks. 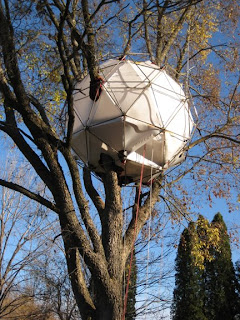 We retired to the garage for some home brew and darts. Jamie’s neighbor, Mikkel stopped by to join the fun.

Most people get to see our toys as we are paddling them, but we now had the opportunity to see some of the toys that Mikkel had at his place next door. Among his toys were several kayaks, a motorcycle and a tree house. A tree house? Yes, a tree house. It isn’t your nail some old lumber in a tree kind of tree house, but a geodesic dome tree house. I was suitably impressed.
Posted by Kevin Knieling at 11:37 AM