Oddly enough, there was an incessant mooing throughout the night from a cattle ranch across the lake. I wasn’t sure if the cattle were spooked, but from sundown to sunup, there constant sound of the cows hung in the air 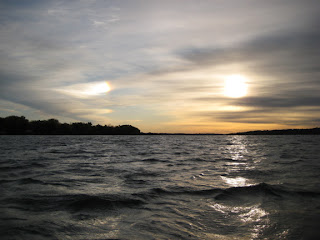 We had a rough start getting on Lake Traverse as the waves from the previous evening continued on through the morning. The boat ramp we used was steep, which lead to us taking on water as we set off. It even seemed that the chop worsened as we entered the water.

I usually have fun surfing my kayak on waves, but as the keel of my kayak was not straight, my kayak didn’t act as I would have expected. I was supremely frustrated in the performance of my kayak, not only because I spent nearly two grand on the thing, but because I was expending a significant amount of additional energy getting it to do what I wanted it to.

While the frustrations of my kayak were weighing on me, I tried to keep my mind off it by enjoying the changing of the leaves. Many of the leaves were taking on a yellow tone. There was very little in the way of red, but yellow was a nice change of color from the brown mud and green brambles of the Red River.

It was another day with no shortage of water fowl. On one section of the lake, that must have been a highly desirable area for birds, I paddled though the quacking, honking, chirping and flapping of wings as some of the birds took flight.

As I looked at the time, I noticed that by noon we had paddled 17 miles. While it certainly wasn’t our best distance by lunch, we also didn’t exactly get an early start that morning either.

We reached the end of Lake Traverse and arrived in the town of Ortonville, MN by early afternoon. As we needed to resupply, we decided to stay there for the night. We got out of the river at a boat ramp at the south end of town and marched right up to the grocery store so we could get our shopping out of the way. We parked our kayaks outside as we are becoming accustomed to doing and went in to shop. Don’t ask me how, but we were immediately picked out as the two guys with the kayaks. It’s not like we wear shirts that read “That is my kayak outside”.

We went up and down the aisles opposite one woman who would stop us on each pass to ask another question. Also while in the store, one of the employees asked how much it would generally cost to rent a kayak, as it looked fun. It took some time to get our shopping done having to stop and chat with everyone in the store, but eventually we made it to the register. As we were paying, the one employee who inquired about the rental rate of a kayak posed an odd question: “Do you guys eat meat?”. After responding in the affirmative, he ran off and came back with a cooked chicken. It answered our dilemma as to what we should have for lunch.

We left the grocery store and had to walk up a steep hill towards the highway to find the area of town that was home to all the motels. Not five minutes into our walk, the one lady we passed in each aisle pulled up and gave us directions as to how best get to he part of town with the motels.

We arrived at the intersection of a highway and couldn’t see a motel in either direction. We must have stood there looking confused as another woman came by and asked if she could help. She pointed us in the right direction and told us to hang on for a minute. She rang her husband and told us that we were welcome to stay with them. It was a very generous offer, but we had so little time in town and a long list of things to do, including update the website and do some serious damage to a washing machine with our filthy clothes, we had to decline the offer.

We found a motel a little further down the road, but not too surprisingly, there was no place to put our kayaks. Next door was a storage warehouse, but I was unable to get in touch with anyone at the number posted. On the other side of the motel was a car dealer / repair shop. I figured they would have the space if we dropped them off as they closed and picked them up before they opened for business the following morning.

Kobie and I walked into Hills Motors and spoke to the owner Dustin. We talked for a bit about his business as well as our trip, after which he agreed to let us keep the kayaks at his place. Problem solved.

We checked into the hotel and a hot shower felt unbelievable. It seems to be a rarity these days to find a hotel/motel with good water pressure. We hit the jackpot. It wasn’t quite like where I was living in Los Angles, which could knock you over, but I was happy. As I was showering I realized that the skin on all of my knuckles was splitting from the cold. Blood dripped down my hands, but at least had a great shower.

After having our chicken for lunch, Kobie and I decided to venture out into Ortonville for dinner. There was little in the way of choice, so we ended up at the Dairy Queen. At least I got to wash down my meal with a large ice cream.

In the evening I caught up on what was happening in the world, including the beating that Wall Street was taking. When I tell most people that I used to work on The Street, they make some sort of comment that I picked a good time to be out of the game. In truth though, I really miss it: the mental challenge, the pressure and everything else that comes along with it. It’s no surprise that in my international travels whenever I visit a new country I always visit their Central Bank and Stock Exchange, should they have one.

There was one good bit of news in that I had agreed with the kayak manufacturer on a location where I would be able to pick up my new kayak: Mankato Minnesota. It was still several hundred miles and nearly two weeks away, but having a bill of lading e-mailed to me made me feel a whole lot better about getting the kayak.

Despite ending my day with the good news that I would hopefully soon be in a properly functioning kayak, I just couldn’t sleep. I had the weight of the world on my shoulders that night, thinking of the drubbing that the Dow and what it meant, along with what the future might hold for me. The last time I glanced at the clock, it was 2:45.
Posted by Kevin Knieling at 6:47 PM