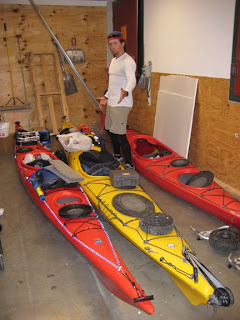 Kobie and I were back on our old schedule of rising somewhat early. It was a good thing as well seeing how the day got away from us yesterday. Our gracious hosts whipped us up a hearty breakfast before shuttling us over to shop where our kayaks were stored.

Phil and Margie took us over to Scheels to pick up our kayaks before dropping us back at the river. While at the store, Kobie and I had the chance to meet a whole bunch of great people that worked there, including one person with the last name Scheel. We were even sent off with a few sweets to give us a little pick me up on the river.

Phil and Margie drove us back down to the river and said goodbye. It was so great to have the opportunity to meet such an amazing couple. It seems that it is a certain kind of person that takes a stranger into their home and in my travels, those are the people that are the most open and interesting. I am so humbled by the kindness showed to us on our journey to date, this example being one of the finest. It was hard to leave, but as there was a measurable snowfall in North Dakota reminding us that winter is nipping at our heels.

We set off and while I had noticed some further defects in my boat such as missing washers, it did track straight. Whenever I looked down at the pitted areas of the kayak though I grew annoyed. I have since spoken to some people about Confluence Watersports / Wilderness Systems and was told that the company has grown too quickly and hence their quality control has suffered significantly. Well congratulations Wilderness Systems, you have churned out another piece of crap.

When leaving Mankato I saw a Bald Eagle within 20 minutes of starting to paddle. I took that as a good omen. The eagle was soon followed by a number of deer in the East Minnesota Game Refuge. When Kobie and I see wildlife on the side of the river, the person in front stops paddling and points like Babe Ruth calling his shot, so that the other guy doesn’t miss it.

It was a hair colder than would be ideal, but it was close enough for us. It was that north wind we had been looking for the last seven weeks that had finally arrived bringing the cold air. The only problem was that from Mankato to St. Paul, MN we would be traveling northeast. We would have to head north for 110 miles before making our turn south again. Murphy’s law.

We followed Highway 169, that which links Mankato to Minneapolis, for the entire day. It wasn’t the most serene day paddling, but when the river turned away from the road it was pleasant enough.

In the afternoon we saw a guy get out of a van and take photos at various bridge crossings. He was from the Mankato Free Press newspaper. When we stopped at the boat ramp in the town of St. Peter, MN we met the photographer, but he wasn’t taking photos for the paper but rather a book about the history of the river. One of the photos did appear in the paper, though I haven’t seen it.

It was a short day paddling as we didn’t start as early as usual and we found a campsite well before our usual stopping time. As I had a new tent to figure out, it wasn’t a bad thing. It also gave me a chance to call the Minnesota Department of Natural Resources and chat with them about the river conditions that we had experienced. They also gave us a few warnings about the river up ahead, in that it may be blocked and that many campsites had been washed away.

The short day also allowed me to mail off a few things at the post office and pick up a couple subs for dinner from a place called Eberts & Gerberts. I have never heard of them, but apparently they are a chain in the Midwest.