I certainly wasn’t wrong about it being a cold night. I woke to everything outside being covered in a heavy frost. My new tent was pitched under some degree of low tree cover, so I fared better than Kobie, whose kayak and tent were white. When I took the rain fly off my tent though the condensation from my breath on the inside had turned to ice. Again, Kobie had it worse than I as he had collected enough snow in his tent to make three or four generously sized snowballs.

I was supremely happy with my new spacious tent as well as my sleeping bag. One point of concern with the sleeping bag though was that it lost a good bit of the down insulation. The down should remain in the bag and not end up on my sleep clothes.
Just before heading down to the boat ramp I grabbed the bandana I had sat on a nearby picnic table. The bandana must have been moist as it was as stiff as a board after sitting for a few minutes. Were the day to warm up just a hair and precipitation would fall, it would be a miserable day paddling in the freezing rain. The day however, seemed as if it would warm significantly. It did and gave us completely cloud free blue skies to boot.

Down at the boat ramp when packing the wheels from my kayak cart away, I noticed the tube poking through the tire; the same affliction that brought Kobie to a standstill in Fairmount, ND. I decided I should try to get replacements before leaving town. I ran to three different shops without success, but was told I could probably get them in Mankato. Thanks. I would have to be cautions with the tires I had.

Similar to the prior day I saw a Bald Eagle within minutes of beginning to paddle. Later in the morning I had a Bald Eagle fly straight over my head from behind, clearing me by 15 feet. Seeing those eagles fly at close range is a breathtaking experience.

I don’t usually leave my phone on while paddling, but I did for some reason. Oddly enough, my phone rang with someone from KYED news in Mankato on the other end wanting to do a story about our trip. The story can be found here. I notice three major mistakes with the piece, can you find all three? I will get you started; throwing the word “tycoon” around is one. 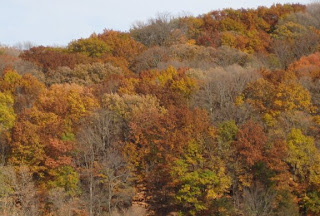 The day never really warmed up to the point where I wanted to strip much in the way of clothing at any point in the day. At lunch we dried out our tents as they still both had ice on them. As we paddled away I noticed the rust colored leaves coating the trees. It was exactly how I imagined Autumn would be in Minnesota. I just thought that it would be a few hundred miles south of here.

Kobie and I made a quick stop in the town of Le Seuer, MN to meet the woman from the TV station. I figured they would send the low person on the totem pole, but she apparently interviewed Al Franken, the Democratic candidate for Senate in Minnesota, that morning. Unfortunately, she got a few of the facts wrong and became a little creative with the story. She did however tell us that it was supposed to rain later in the day; perhaps she had spoken to the meteorologist before meeting us.

In the afternoon we had a little company on the river as a beaver swam next to us for several hundred feet. It was quite surprising as beaver are generally shy. Usually, after a beaver spots us and has deemed us a potential threat, the beaver would duck underwater, slapping its tail as it breaks the surface. It is a warning sign to other beaver that there is potential danger lurking.

Over the last few days the area surrounding the river has become quite sandy. The sand doesn’t stand up nearly as well as the mud further north and erodes rather easily in comparison. Several of the oxbows in the river had been cut off as the straight line direction that the river wants to run had penetrated the bank to the far side of the oxbow. This made the river distance shorter, but only by a negligible amount.

The sky clouded up later in the day, so we were happy to find a campsite that was secluded and had tree cover. It seemed such a long time that we had camped alongside the river in a primitive campsite though it had been barely a week.

As we were near enough Minneapolis I called two of my buddies who are originally from there. The theme of the conversation had the same sentiment in both cases; get south fast as it would be getting very cold, very soon.

It seems that the news girl was right in one respect as it did start raining. I was serenaded to sleep by the raindrops tapping on my tent and a periodic howl of a coyote.
Posted by Kevin Knieling at 7:06 PM