We had found ourselves a nice secluded campsite sheltered from the wind and some of the rain that fell overnight. It was only a few degrees warmer than last night, but those few precious degrees made all the difference. I had only woken up a couple of times during the night, once to coyotes howling and another to chase away an animal that came through camp, most likely a raccoon.

My new tent beaded water like a freshly waxed car. I’m not talking about some kid wiping on some turtle wax either. I’m talking about the buffer. I was pleased with my purchase.

As we were breaking down camp the rain cut us some slack and stopped falling, but just long enough for us to get out on the river. The morning started with a light drizzle. Kobie mentioned as he does periodically in the morning, “If the weather stays just like this for the day, I’ll take it”. At least he is reasonable; he isn’t asking for 70 degrees and sunny, just the same steady drizzle with little wind. 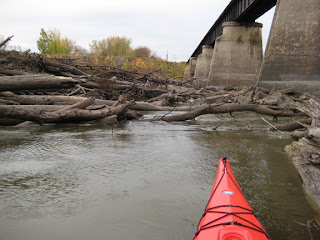 The day was an exercise in misery. The morning was just grim. The forecast was for a day of rain and a high of 40. The rain was on and off for most of the morning, though mostly on as it became persistent.

We pulled under a brige for a quick lunch out of the rain, but as we were already wet, the breeze chilled us to the bone. My spray skirt is allegedly waterproof, but if it is, my lower body would have been far dryer than it was. I would have been able to wring out my shorts. We wolfed down a quick lunch and jumped back in our kayaks. My feet were cold, my fingers were really cold and I was just thinking about crawling in a dry tent and a warm sleeping bag. There was however some talk about a hotel, though we weren’t sure if we would be near enough a town to get to one.

I started seeing increased plane traffic at lower elevations below the rain producing clouds. It gave me some hope that we were slowly reaching Minneapolis/St. Paul Airport and the locus where we would again turn south.

There was one section of river that I believed to be a small section of rapids, however, they were fixed flat rocks just below the surface of the water. I made the wrong move of picking up speed and succeeded at climbing the rock section and managed to firmly lodge myself. It took me a couple of minutes to extricate myself as there were other rocks pinning me in place and hoped that would be the end of it for the day. Instead it would be a harbinger.

Shortly downriver I heard a rumbling sound. I thought it couldn’t be water as if it was, it would mean a one heck of a ride. As we rounded a bend I saw hundreds of gulls picking off small fish in the rapids. The rapids were more significant than anything we had encountered. Perhaps as the water level was low, more of the rock formerly below the surface was exposed.

We did some reconnaissance on the rapids and determined that our best option was to take the left side. It turned out to be the wrong decision. Perhaps it turned out to be the correct choice as the result of some of the other options may have had a drastically different and more dire outcome.

The rapids had three distinct drops, each of several feet. I paddled for all I was worth, aiming myself into a pocket between two rocks. Even my best effort paddling wasn’t enough to keep me from getting lodged on the uppermost section of rapids. As water was rushing against my kayak threatening to tip me over I struggled to free myself only to drop several feet and repeat the process of getting stuck once again. It happened a third time before I finally extricatied myself from the rapids and was able to paddle in open water. Kobie was bound to a similar fate. On the rating scale the rapids would probably be labeled as Class II+; not crazy but also not something we should be running in touring kayaks. This area we are in is called the Carver Rapids Wildlife Unit so what did I really expect?

The rain in the afternoon was more cooperative, but I was no less cold. I was kept amused at the squeaking sound that my gloves were making as I rotated my left hand on the paddle to take a stroke. It sounded identical to a car windshield wiper squeaking along. At this point that sound has become Pavlovian to me, indicating rain.

At just the right time of day when we wanted to stop paddling we rounded a bend and there was the town of Chaska, MN. Better still was that the first indication of town that we saw was a Best Western sign right on the river! When we witnessed that, the decision was made. I had thoughts of a repeat performance of Mankato, but in an expansive hotel the woman at the front desk told me that only six rooms had been filled for the night, so we would be able to get out of the rain.

As we pulled up the boat ramp and to the hotel I got the first real look at the town. While I can’t say it reminded me of an older European city entirely, the cathedral tower did make me at least consider it.

At the hotel there was an underground parking garage which would serve as a home to the kayaks. While the area was secured we still had our doubts, so we put the kayaks in a maintenance structure that was I the corner of the garage. That was a new one for us, or rather our kayaks.
Posted by Kevin Knieling at 7:30 PM