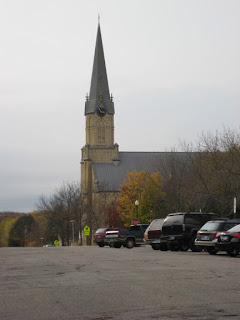 I was unable to sleep in as when I first opened my eyes, the enormity of what I needed to accomplish for the day began to weigh on me. In running the usual errands though I was able to learn quite a bit about the city.

Chaska's history is deeply rooted in Native American culture. While the town was initially named Little Rapids, it was renamed Chaska, which is derived from a Sioux name often given to the first born child.

The signing of the 1851 Treaty of Traverse des Sioux, ceding land to white settlers allowed the founding of the town, initially 20 acres in size. The town became a large producer of bricks due to the clay readily available in the region. It wasn’t until the Minneapolis and St Louis Railway was brought through town though that the expansion of the city took root. Later, the area branched out in the production of any number of agricultural commodities.

Today the city of Chaska has a population of just over 20,000 and more importantly, is home to a Best Western, right on the bank of the Minnesota River.
Posted by Kevin Knieling at 7:35 PM