Across the Laurentian Divide

Upon waking in the morning we found the temperature to be in the upper 30’s, with heavy clouds in the sky. While the day was quick to warm up, I realized that I had lost my cold weather paddle gloves. I had left them sitting on a rock to dry while we had lunch the day prior.

We had the same wind from the prior day continue in the morning, but as the lake narrowed, conditions improved to the point where at least no spindrift was blowing in my face when hitting an oncoming wave.

Lake Traverse reminded me quite a bit of Lake George in New York. Perhaps it was that there were many and similar styled houses along the water. One common theme between all the houses on Lake Traverse was that they all had their boat ramps pulled out of the water for winter.

One surprising thing was that I passed several more collections of duck hunting decoys right on this public lake. I would think that the homeowners wouldn’t care for the constant gu 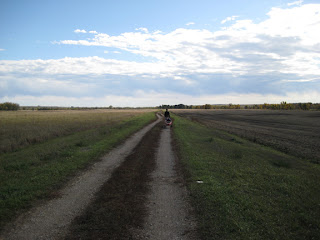 nfire near their expensive second homes. Not only that, but it was a public waterway for all manner of activities, including kayakers.

By late morning we came to the end of Lake Traverse, the town of Browns Valley and the Laurentian Divide. Much like the Continental Divide, the Laurentian Divide delineates a high point in the landscape where water on one side will run in one direction and likewise on the converse side. In this case, all rain falling north of Browns Valley will end up in Hudson Bay and the Arctic, while all rain falling south will end up in the Gulf of Mexico, hopefully taking us along for the ride. More importantly for us though, it signifies that from this point forward, the river current will be running in our direction,

We exited the lake and as we did so, a boat pulled in just behind us with a couple of duck hunters. They were kind enough to tell us a bit about what we could and couldn’t find in the town of Browns Valley as well as the existence of the Little Minnesota River. The Little Minnesota River apparently runs on this south side of Browns Valley into Big Stone Lake, where our trip would continue back in the water.

While Browns Valley was supposed to be the big portage of five or so miles, after having done 30, it seemed as if it would be a non-event, even less so now, that the Little Minnesota River ran for three miles into Big Stone Lake at high water level.

Before the two mile walk into town I had to do a quick fix of my kayak wheels as the wheel hub had been cutting into the soft metal of the axel. It was at his point I was actually glad for litter, as I was able to slice a plastic sheet out of a soda bottle to wrap around the axel of my kayak cart.

As we walked into Browns Valley I was finally able to put a face to the name of the town as I had looked at nervously so many times on the map, thinking it would be a rough day getting the five miles through town. It was far from rough. I found Browns Valley, population 690, to be a friendly delightful little berg. Even the town park, offered camping and had a small orchard growing in it.

As we made town, the two duck hunters we met at the dock had returned having checked out the water level in the Little Minnesota River for us. They claimed that it would probably have enough water for us, though we might have to get out a few times to avoid blocked areas in the river. As we were standing on the end of Main Street, they were also kind enough to point out the tire shop, the diner, the grocery store and the road which we would need to take to get to the Little Minnesota River.

Our first stop was at Valley Tire, where I was hoping to set up with a new set of tires for my cart, as I was still using the hard spare that Pinky and Jack had put together for us in Fairmount, ND. While they didn’t have the tires I needed, I had kept one of Kobies old tires as a spare. Lonney, who worked in the shop, was able to swap out the tires for me and using the one spare tube we had to get me up and running again.

From the tire shop we moved across the street to BJ’s Restaurant, where we gathered a few curious looks as we pulled up. As we were about to go in we spoke with an elderly woman who just loved the idea of our trip. She inquired as to how we finance our various trips and after explaining the situation she offered us five dollars. We politely declined and went in for lunch.

It was a small town and all of the patrons of the diner overheard us speaking about our trip and out of nowhere would jump in with questions. We were having conversations across several tables to different people in the diner. I felt like a minor celebrity. As we got ready to leave we were informed that the kindly old lady had paid our lunch bill. 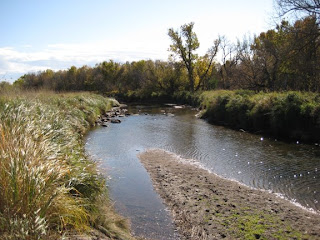 We made one last stop at the grocery store to pick up a few items and then set off to get back on the river. As we approached the river a man by the name of Denny pulled up and clearly had an in depth knowledge of the area. He suggested to us that we do not enter the river where the duck hunters mentioned, but a little further down so as to avoid all the blocked sections of the river. It involved another miles walk, but to avoid having to repeatedly get out of our kayaks, I was fine with that.

Denny had given us directions which would take us across private property, but he said that if anyone asks, we should mention his name as he knew the owner. As we walked on, Kobie and I weren’t exactly sure if we had found the right place, but we did find the Little Minnesota River. Other than having to walk in the river the first couple hundred of feet, it was mostly smooth paddling to Big Stone Lake. 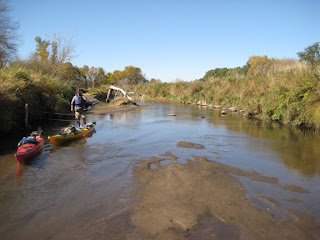 I say it was most smooth paddling as there was one area where we had to go under a barbed wire fence. I could only assume that the fence was there to prevent cattle from wandering off. Absent that, we paddled the near two miles into Big Stone Lake.

As we hit the open lake we felt the wind at our back pushing us along. The wind wasn’t directly behind us, but coming slightly over my right shoulder. I was thrilled to have the wind at my back, but if I were required to complain about something, it would have to be that the drops of water from my paddle would blow into my right ear.

Much like on Lake Traverse, there was plenty of waterfowl. I got a real laugh watching flocks of Coot take off. Further to my observation several weeks ago where Canadian Geese do a short run upon takeoff and Pelican’s hop, I had more in the way of waterfowl to add to my list. Obviously the Coot makes a long run, but I noticed that the Mallard Duck is aloft in one wing beat, not having to run at all. I also spotted numerous Cormorants on the water, who are much better at diving and swimming to avoid predators than taking flight. Cormorants have an ungainly wing flap where part of their wings are buried in the water until they take flight. I was unable to tell what their feet do as the splash from their wings camouflages their gait. I am sure that there is an entire discipline in ornithology that focuses solely on how avian creatures take flight.

The wind pushed up some fair sized waves on the lake, at least big enough to surf my kayak. There were also whitecaps spread across the water. I had the crazy idea to see what it would be like to paddle my kayak into the waves, so I turned around and went back the way we came. I have done my share of ocean kayaking, but each boat handles differently, so I wanted to put this one through its paces. While it was fun to crash through the waves, it left me completely soaked. As it was near the end of the day, I didn’t really mid being wet.

We ended our day at Big Stone State Park, which didn’t really have anyplace to camp, but given how late it was in the year, we didn’t think anyone would bother us were we to spend the night. We found a sheltered area under some trees and set up our tents. We practice leave no trace camping principles, so we thought it would be OK.

Once we had our camp set up, I sat down on the dock and ate my dinner watching the sun set over Big Stone Lake. While I have the opportunity to watch the sunset nearly every night, I never take it for granted and usually use the time to reflect on my day and life in general.
Posted by Kevin Knieling at 7:11 PM