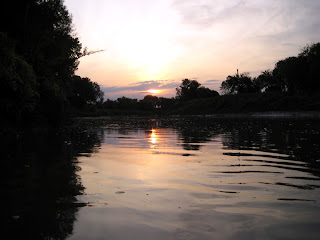 It was an exercise in misery trying to get our kayaks up the mud slicked boat ramp a day earlier, but on this day we were going the other direction. I climbed in my kayak near the top of the ramp and Kobie gave me a solid push, sending me sliding down the mud covered ramp a good 25 feet into the river. At times, most of the time really, I am a big kid. It was the most fun I had had in several days.

It was another day with a post card sunrise and another day with a light wind against us, gathering power as the day wore on. Surprisingly, the river widened. I was expecting the river to continue shrinking narrower until we reached the narrowest point at the source, where the Bois de Sioux and Otter Tail rivers converge to form the Red River of the North.

A similar oddity of the river was that the high water mark looked to be nearly eight feet higher than the current water level. The prior day it was only at four feet, a rather large jump for a small number of river miles.

The river was running in fits and starts throughout the day. Some sections of the river were barely moving whereas others rushed along as the water was funneled along a downed tree. There was also a series of islands that appeared in the middle of the river. It mixed things up a bit as it gave us a choice as to which path we would take around the island, though in the end we wound up paddling along the same river, with the same steep muddy banks, that had the same brambles growing just above the same water line, which were inhabited by the same mosquitos.

During the morning paddle we witnessed a casualty of the Red River. There was what looked to be a fiberglass Jon boat suctioned to the silt/clay mud of the red river, leaving only a small section of the bow above the surface of the running water. I still can’t figure out if most of the debris we see in the river is due to heavy flooding where people don’t have their possessions tied down tightly enough, or if folks are trying to get rid of some things that are past their prime and decide to launch them down river towards Canada. 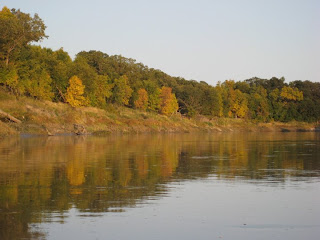 While the morning was quite cool, as we sat down to lunch things began warming up. Some people have inquired what types of things we eat on the trip and for this particular lunch we had baloney & cheese sandwiches with tomato, avocado, & mayo. It was a fairly typical lunch for us. I carry a little cooler and really, items that are supposed to be refrigerated last far longer than the USDA would suggest. For the longer stretches between towns, we do have the requisite jar of peanut butter, although we still have the same jar we left Winnipeg with.

Other than the sore muscles of the arms and shoulders, I am feeling quite good. While kayaking, the majority of the power in a stroke should come from the core muscles in your trunk, but the arms and shoulders get a solid workout as well. To try and get a handle on what we are doing, think about going to the gym and doing some curls. Nothing crazy here, lets just grab a five pound weight in each hand and start doing curls. No problem, right? Now do that for eight hours. And again the next day and the next and, well, you get the idea. Other than fatigued muscles there is the odd callus forming on my hand and a rash developing on my lower back from the friction of my seat, but all in all, I am feeling just fine.

In the early evening we began looking for a campsite, but anything that was level enough to land our kayaks on was too muddy. We were also near farm land that had sheep grazing on it, so that took away a significant amount of real estate. It took us a half an hour to find a campsite that was marginal at best, but it would be our home for the night. Little did we know what we had in store and for once it wasn’t mosquitos. We were still within earshot of the bleating sheep, not to mention that shortly after getting set up there was the hooting of an owl coming from the trees, though I managed to fall asleep. I was later woken to a start by howling coyote. We knew that there weren’t many coyote in the area, but these sounded as if they were just across the river. While Kobie woke up as well, he managed to drift off to sleep much quicker than I.
Posted by Kevin Knieling at 1:54 PM